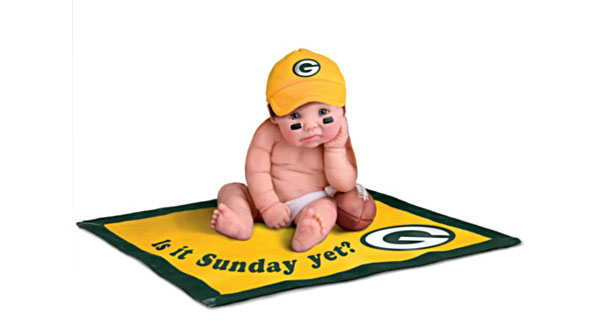 It all started with a baby.

Well, actually, it started a little earlier. My grandparents’ health has been in decline, and it’s unlikely that they’ll be able to travel here for the wedding next year, and as Jason has never met them, we planned a trip to Wisconsin in September. Within twenty minutes of our arrival, grandma pointed to her refrigerator and said “Did you notice my baby? I just love him.”

On the fridge was a photo cut out from the back of Parade magazine of a chubby despondent baby figurine seated on a Green Bay Packers towel with the words “Is it Sunday yet?” written on it. “Oh, he’s just the cutest. I was going to send away for him, but it was just too much money.” In the mornings, I would wake up (You can’t wake up if you never managed to fall aleep, and, side note, I don’t know where you can buy a bed that’s made of concrete and steel wool but my grandparents evidently either bought or constructed one (Pillows, too! (When grandma finally inquired as to why we both looked so haggard and we told her we haven’t been able to sleep on that bed, she said she had read that a hard bed was good for your back. Up to a point, grandma! Somewhere before the point where it causes back spasms.))). Let’s start over. I would know it was morning when through my desperately tired haze, I would hear grandma in the kitchen talking to the refrigerator baby. “Awww, it’s not Sunday yet, little guy!” Sometime around the 72 hour mark, I broke down, grabbed Jason’s phone, and ordered the baby.

I shortly received an email stating that it would be shipped soon, and in four to six weeks, they’d be sending another baby in the series. OH HELL NO. I didn’t agree to that! What followed was a forty minute hold time waiting to speak to someone in customer service to cancel future emo sports babies. After finally speaking to a human being, I was assured that grandma would only ever receive the one baby. What I wasn’t assured of was what else they would do with my information. As soon as the credit card charge went through, I was signed up for every email list of every company ever associated with The Bradford Exchange. The Ashton-Drake Galleries. The Danbury Mint. Multiple times a day, every day, I was informed of some deal that was too good to miss–lifelike babies, NFL merchandise, beaded crosses, gumpaste jewelry…all of it offically licensed, exclusive to them, and available in easy installments. I tried unsubscribing; the unsubscribe button just seemed to encourage them. I told them they were in violation of the CAN SPAM act and that they must remove me from their lists. They told me it would take 2-3 weeks for the messages to cease. After five weeks, I was still receiving email and it finally stopped when I told them they were still in violation and would begin the process of escalation (reporting and suing if necessary) if they did not cease immediately.

Around this same time, our mailbox began to be flooded with the strangest variety of catalogs, many also offering similar payment plans and credit card offers. At first I figured that my credit had bumped up a spot from “danger, danger” to “bad with money in a way that’s profitable for predators”, but then I noticed all of the catalogs were in Jason’s name. Jason, who never orders diddly squat on the internet unless it’s available via Amazon Prime…except for that damn baby. This flood of catalogs was at least funny for a while (Who would buy a puzzle of cartoon animals in holiday scarves gathered around a bear pooping in an outhouse? Who would buy drawstring pants printed to look like jeans along with “hole” details that make it look like there’s a black hole where your knee should be? Or that have awful printed “patches” and are made to look like your boxers are hanging out?) but we received one this week that was the last straw and the impetus for me to spend another forty minutes on the phone demanding that my address be removed from their records. Far be it for me to suffer alone: Or, more accurately, there’s still time to make someone weep in terror on Christmas. Here to fill your desperate need to be needed, a baby who will never stop crying and will never ever leave you unless the dog grabs it and buries it in the backyard (good boy!). But what happens when you shake it? And why don’t they offer the slightly older, with a firm grasp of language “I hate you” toddler? I thought they were going for accuracy! If a baby human just won’t do it for you, they also offer horrifying little baby monkeys, also with creepy realistic skin. A golden idol? I’m pretty sure this was exactly the thing God was pissed about before he passed down his ten commandments. But the more important question is: are there any left?!

Any of these would be hilarious to purchase as a gag gift to sneak into an unsuspecting friend’s home…if only I didn’t have to deal with 80 more minutes of phone calls and a deluge of mail and email afterward. Rest easy, friends. For now.

Nom or Vom: The Anus That Made Britain Great

Spotted on the Roadside: The Seattle Great Wheel

1 Comment → “Oh, great. I specifically asked not to be seated next to a baby.”