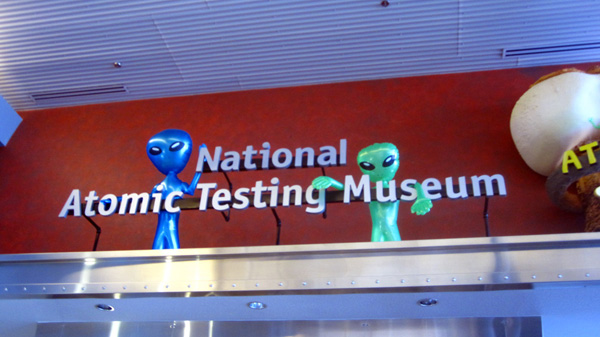 High on my list of Vegas priorities was a visit to the National Atomic Testing Museum as it was something that I’d intended to visit for the last several Vegas trips and for one reason or another never got to do. I wasn’t entirely sure what to expect, as it is an affiliate of the Smithsonian, but also contains an exhibit exploring the mystery behind Area 51–is it serious? Is it kitsch? The answer is that it’s enough of both to be disconcerting. We went through the Atomic Testing section of the museum first, and the front portion of it is filled with kitsch from the atomic age–atomic cocktails, atomic fireballs, quotes from Doctor Strangelove, and videos explaining nuclear energy to schoolchildren. In the 1950s, the explosions from the Nevada test site could be seen for 100 miles (including Las Vegas), and tourists flocked to sip cocktails, watch the mushroom clouds, and feel the ground rumble. It was generally believed at that time that atomic energy would pervade every area of people’s lives, from powering their homes to preserving their food, and it was the height of modernity to accept the magic of nuclear power with open arms. It was in this area of the museum that a curator stopped near our group to tell us that she’d had a friend who worked at the atomic test site for the first test, and that they had no idea what to expect: “When the explosion happened, they thought they’d opened a door to hell.” Further in the museum, they had videos explaining the different protocols involved in launching a nuclear test, and how they prepped soldiers for nuclear warfare with other countries by having them stand out in trenches near the blast zone, literally brushing them off with a broom afterward as if that alone would protect them from the radiation exposure. One of these videos started with a simulation of what it would be like to actually have witnessed an atomic test (from a tourist’s distance)–the ground rumbled, the room filled with light and heat and a gust of wind blew back your hair and clothing. My favorite display was an interactive video reel in which you could see the effects of a nuclear explosion on a house, a stand of trees, a school bus, etc controlled by your finger with a wheel, so you could view it forward and in reverse, and I played with it perhaps a bit longer than was polite when others were waiting to use it– “Roof blows off, roof blows on, branches blow off, branches blow on, bus tips over, bus tips back…” It’s a miracle that I didn’t have to be dragged away from it, kicking and screaming. Scientists and soldiers who witnessed atomic tests received certificates; this is the best one I saw. Who wants proof of witnessing an enormous explosion with a drawing of a fat baby on it? That doesn’t scream “Display me in your home for instant sex appeal”! This one does.

The deeper you go into the museum, the stranger and less cohesive it gets. The massive consequences for the nuclear warfare actions of the United States are brushed over like their soldiers after a nuclear test–half-assed, all the while repeating the refrain “Go USA! Go USA! It is our massive display of continued dick-waving that maintains peace! Jesus and eagles and bombs, fuck yeah!” It completely ignores the human tolls for exerting our dominance, which seems short-sighted. There’s no acknowledgement of the consequences suffered by the inhabitants of the Marshall islands; in fact, the museum pretends that these islands were completely uninhabited, which is not the case. (Because how could we justify nuking innocent indigenous peoples for the sake of our warfare? We couldn’t. We can’t. So instead we pretend that they don’t exist.) It shows photographs of the damage taken by dummies at the test sites but talked very little about the negative results of atmospheric testing on the populace, instead portraying everyone who protested atmospheric testing as an overreacting, anti-American, Commie-loving hippie. It also contained a digging drill “like the one that helped free the Chilean miners” (what?) and an entire section about 9/11–a tribute to the firefighters, a piece of the World Trade Center…what does this have to do with atomic testing? You’ll acknowledge death that happens on American soil from non-nuclear causes but completely ignore our responsibility for Hiroshima and Nagasaki AND you’ll sell little replica earrings of “Little Boy” and “Fat Man” in your gift shop–the bombs that killed 300,000 Japanese people, more than ONE HUNDRED TIMES the death toll of 9/11 and for which nukes were directly responsible? What in the ever-bleeding fuck makes you think this is ok? What I’m saying is, it ends on a strange note.

From the atomic portion, we went directly to the separate Area 51 section, which requires that all members of your group enter together and has timed entry so that groups aren’t running into each others’ heels. You usually see timed entry for things like haunted houses where actors have to have time to get back into place after scaring a group. Between that, the sheaf of “secret orders” given to each of us, the lanyards we had to wear outlining our different roles in the group, and the prohibition of photographs, my expectations were set fairly high. What I learned is that photographs are not allowed because the Area 51 section is so terrible as to nearly defy explanation…but I’ll do my best with my limited language capabilities. At the outset, you are prepped by a video of an FBI agent on a flatscreen television, asking you to investigate the truth of the sightings of “flying discs” observed near Area 51. After he sends you on your mission, you walk down a spooky hallway lined with black garbage bags where you are confronted by…another flatscreen tv! With an alien on it! Who says something all spooky-like before he vanishes!

You then enter a room that has a sparkly piece of garbage stapled to the wall, asking you to consider the idea that the phenomena observed by civilians could be a weather balloon. Frankly, I can’t even believe that the crap that they tacked to the wall is a weather balloon, much less draw any conclusions about what someone else saw blinking at them in a remote desert. The room also contained a rubber alien autopsy with a placard indicating that in the room you could watch a video of the now-infamous alien autopsy hoax from 1995–I don’t know if they couldn’t get the rights or what, but there was no alien autopsy video playing in the room. There were, however, about three more televisions, and they were all playing something different to the point where it was incredibly difficult to focus on any one of them…and while I found this overwhelming to my senses, it was about to get worse. The air inside the exhibit was hot and stifling; sweat prickled out on my forehead as I progressed through. Not only were there battling televisions on the walls, surrounding me with incoherent streams of sound, but the remaining walls were filled with enormous signs printed with small text with strobe lights flashing on them, rendering them nearly impossible to read; the letters swimming in the air in front of me. It was one of the most physically oppressive environments I have ever experienced; the act of writing this is causing me to revisit the experience and I am currently battling waves of nausea and panic while typing.

Some rooms were filled with model aircraft, but everywhere was a cacophony of sound and flashing light and heat, and I could not linger to try to parse anything. As you exit, you are confronted by yet another flatscreen video of the FBI agent telling you to draw your own conclusions from the evidence, and as he turns and walks away, he transforms into the spooky alien you saw earlier! DRAMATIC REVEAL! All I learned from this exhibit was that someone is talented at assembling model airplanes–beyond that, I couldn’t say. If there was evidence presented that we actually could draw conclusions from, it was obscured by the environment of the museum itself. They didn’t even show any videos of the supposed claims we were “investigating”! The lanyards with our mission roles had nothing to do with anything in the entire exhibit, and all in all, it felt like a tacked on piece of crap, the sole purpose of which was to teach me about the vacuum of space sucking another six dollars out of my wallet. It’s not like I expected to walk into that portion of the museum and get some straightforward information about what the military does at Area 51 (what with it being, you know, top secret and all), and I’m not saying that I believe that there’s something spoooooky going on or that there’s some big government conspiracy and we’re all ruled by lizard people from another dimension (even though I used to be deathly afraid of the prospect of aliens coming to abduct me from my bed at night…but I got over that at LEAST a solid week ago), but I expected less bullshit from a museum associated with the Smithsonian. I’ve gotten less bullshit from obvious bullshit places like The Oregon Vortex Mystery Spot, and that is pretty goddamned sad. I’ve felt less robbed playing table games at the casinos down the street. The Atomic Testing Museum is worth a visit if you can stomach its blind patriotism and look past the parts it glosses over, because you can at least see some things from behind the scenes at a point in history that you might never see otherwise. The Area 51 exhibit is only worth a visit if you hate yourself, have thirty minutes to kill, and would like to investigate whether or not you’re prone to seizures.

Let that be a lesson to the rest of you…nuts.

Buc-ee’s, a friend to all travelers in need