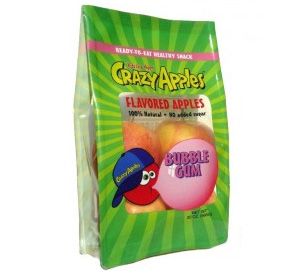 Certain that the general public would eat more fruit if it wasn’t so annoyingly fruit-flavored, Crazy Apples have unleashed a number of unlikely apple flavors out into the world: tropical blast, pomegranate grape, and bubble gum. How do they do this? They say they’re 100% natural, non GMO, but that they “can’t tell you exactly how we do it,” so I’m forced to conclude that wizards are involved somehow. Perhaps wizards who couldn’t quite cut it at wizard school and hence couldn’t get important wizard jobs, but can manage to alter the flavor of fruit slightly enough so as to get Muggle children to eat it. Just a guess.  That, or they cut a little window into the apple and cram a piece of ABC gum inside.  Or they wrapped an apple seed in a piece of Bazooka Joe and planted in the yard.  Or an apple and a gumball sat in a tree, K-I-S-S-I-N-G. What am I, some sort of apple scientist? Anyway, I won’t really be impressed until they release a cool ranch apple. You want me to replace other snack foods with apples, you need to step up your apple game to compete with the snack foods I’d actually reach for. Make it look like a ho-ho, smell like a ho-ho, and taste like a ho-ho, and I’m in. That’s not a Little Debbie in my lunch, it’s a Little Debbie CrazyApple!

Pros: two great tastes wrapped into one, ostensibly nutritious, clearly wizardry done on a varietal of apple other than ‘red delicious’ (the least delicious of apples),  the apple itself is Benjamin Franklin endorsed so it stands to reason he would also endorse Crazy Apples

Cons: the artificial taste of gum inside an apple, giving money to slackabout wizards who didn’t apply themselves, supporting the romeo-juliet relationship of a gumball and an apple, apples aren’t supposed to be chewy and bubblegum isn’t supposed to be crunchy so it’s a cognitive dissonance apple

2 Comments → Nom or Vom: Chewin’ gum’s got to be chewed out!