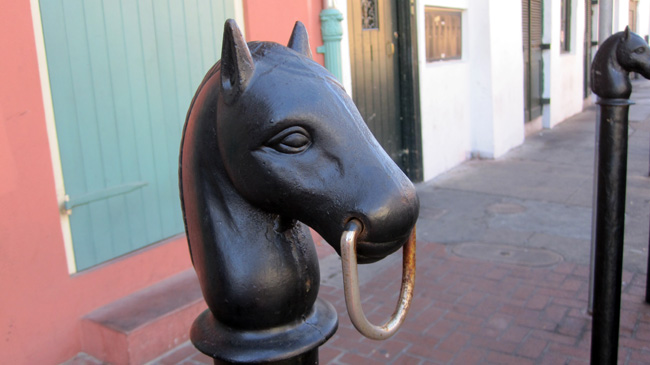 When I was in my early twenties, I would have loved Bourbon Street. I would have definitely reveled in the seediness with a Huge Ass Beer(tm) in each hand, a poboy strapped between my boobs, and I would have offered bites of the sandwich to anyone in exchange for strings of tacky plastic beads, plus I probably would have come home with at least six new t-shirts with slogans ranging from mildly suggestive to banned in three states. Now that I’m older, saggier, significantly less rock ‘n’ roll, and way more possessive of my sandwiches, Bourbon Street doesn’t really do it for me. Every morning, the streets are literally hosed off from the previous night’s debauchery, and the smell that arises from said hosing can only be described as the scent of bad decision making. It could be solely that I am older and more cynical, but especially during daylight hours, it feels like every tagline on Bourbon could be followed by “…you assholes!” “Pizza by the slice…you assholes!” “Huge Ass Beers…you assholes!” “Barely Legal Club…you assholes!” “Put some spice in your life…you assholes!”  “Balcony upstairs party party party…you assholes!” “Home of the hand grenade…you assholes!” Even the stuff that’s sold as sincere is kind of bullshitty. Take Lafitte’s Blacksmith Shop, for one. It’s advertised as the oldest bar in the United States, a pirate bar, and it is a pretty old bar, but not the oldest–it wasn’t a bar at the same time it was an actual blacksmith shop. They also claim that the Lafitte brothers (the pirates in question) used the place as a base for their smuggling operations between 1772 and 1791. However, the elder Lafitte didn’t even come to Louisiana until 1803. And then there’s the faux aging on the outside of the building, which makes it look less authentically old and more like a pirate bar as built by Disney. The only thing I would buy as being authentically old in the building is the bathroom, which will sincerely make you regret breaking the seal on your bladder with the aforementioned Huge Ass Beer…you asshole. Which isn’t to say that dreams don’t come true on Bourbon Street or that nothing good happens there. I was meeting up with friends to take a tour nearby, so we decided to grab lunch at NOLA Poboys on Bourbon beforehand. They actually didn’t have a permit for their deep fryer at the time (waiting on a visit from the fire department) so anything that would normally be fried on their menu was unavailable–which I was totally fine with because I do occasionally eat things that haven’t been deep fried.

I ordered a hot ham and beef sandwich, and while the sandwich itself was delicious, the truly wonderful thing happened in the wake of the sandwich, when I went to wash off the gravy that had dripped down to my elbows. You see, ever since I first encountered one of those super powerful hand dryers that flap the skin on the backs of your hands around like it’s trying to push it aside and dry you at the mitochondrial level, I have wanted to stick my stomach under one and see what happens. The problem is, these dryers are always right out in the open, so you never really get a level of privacy that’s particularly conducive to this type of scientific experiment. However, the bathroom at NOLA Poboys was an all-in-one unit, complete with super hand dryer, and thus, science could happen.

…As my gut whipped around like the Blob caught in a freak tornado, I may have shed a tear composed of 90% joy, 10% shame. Bourbon Street is truly a magical place.