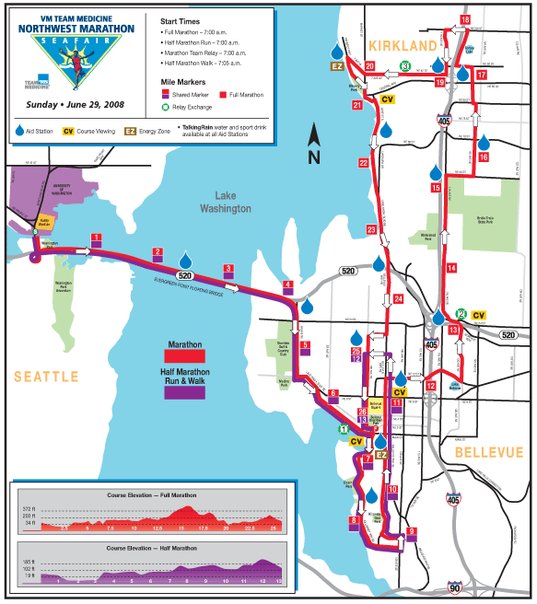 Yesterday, I walked on water. I suppose that statement is a little glib, so allow me to clarify: Yesterday, during the VM Seafair Half Marathon, I walked across the 520 Evergreen Point floating bridge that spans Lake Washington. The view was amazing–Bellevue in front of us, Seattle behind, and snow-capped Mount Rainier off in the distance, and it was easily my favorite section of the entire trip. The route I took is marked out in purple below. Around mile 7, I realized I’d worn the wrong socks–they were intended to wick away sweat, with more padding on the bottom and heat vents along the top, but they hit too low on the ankle, and my foot had been rubbing on the back of my shoe, forming a major blister. By mile 8, I was bleeding. If this were The Long Walk, I would’ve received my ticket by now for ignoring Hint 3.

Miles eleven and twelve were the worst. By that point, it was brutally hot outside, I could feel at least six blisters having their way with my feet, and my legs were on fire. The route set us up to go past where we’d parked, which was unspeakably cruel. Mile thirteen was easier, what with the knowledge that the walk was almost over AND the hot shirtless marathoners running by, though it didn’t slow down my complaining nor my instructions to put my finisher’s medal on my coffin.

At the last section, with the finish line in sight, I found the strength to run. I goaded Carrie into running with me, and while I thought we were just going to do an easy jog, it turned into a full-out sprint, with her blasting past me right at the finish line. One of the other members of our group who’d finished earlier and was waiting for us laughed and remarked that she was surprised that we didn’t give ourselves black eyes. My final time was four hours and change, which isn’t spectacular, but was about as reasonably well as I could’ve expected, with the blistering and the heat factor (I’d been doing most of my training at night and hadn’t realized how much the heat would affect me).

There aren’t any pictures of me stripped down to the sports bra, wearing the medal, screaming in triumph because 1) the shirt stayed on and 2) they were out of medals because they ‘underanticipated demand’ and will be mailing ours to us. I’d find that easier to believe if 1)we didn’t all have to preregister, giving them a damn good idea of demand and 2)the little cards they handed us to say ‘sorry, we’re out’ weren’t laminated. Lamination indicates forethought, not a last-minute whoopsie!

After a celebratory lunch, I went home and took a cold shower, which washed all of the salt off of my body and face (which felt like a salt lick) down into the open wound on my heel, which was…special. After that, I tried to take a nap while the upstairs neighbors’ velociraptors played what sounded like an impromptu game of basketball. I furiously stomped upstairs and pounded on the door, but just like when their toilet overflowed and started leaking into my bathroom and wouldn’t open the door for maintenance, they wouldn’t open the door for me. I shouted through the door in english AND in spanish that they need to stop whatever they’re doing NOW and huffed back downstairs. The basketball-style rumblings have ended…but for how long?

Regardless, now I’ve done a half marathon. Please wait until my body has healed before asking me if I’d do another one; right now the answer is NO. But still, I’m excited about having accomplished this, and knowing what I can do if I push myself. The human body is pretty awesome.

I believe that Dinosaur World is the only place where a boy like me can be happy.

24 Comments → My feet hurt! This fresh air is making my hair move! I don’t know how much longer I can complain!