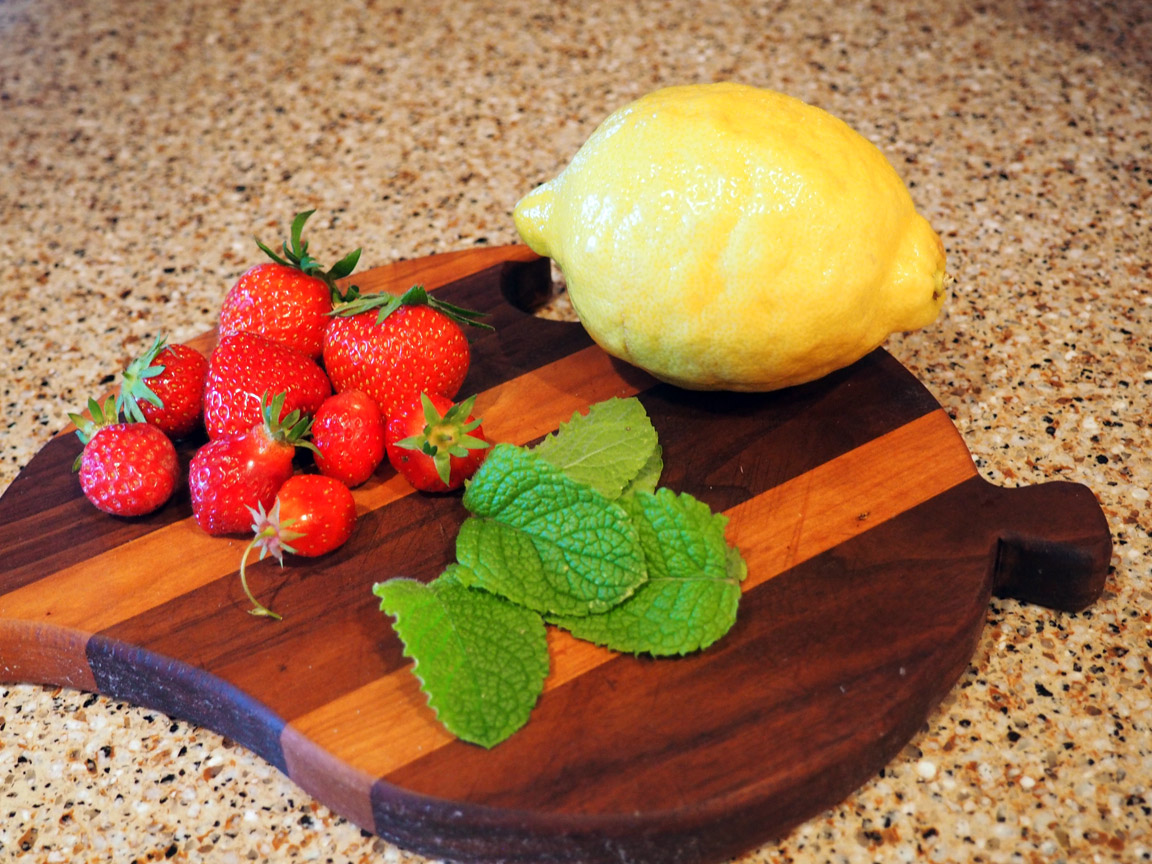 In June 2011, I went on a trip to Vegas where I made fast friends with some strangers there on a poker tour and I got hammered with them at the Treasure Island bar across from the pirate show, because that’s the sort of thing I do. Put me in a room with a bunch of strangers and eventually I’ll know their life stories and have made plans to vacation with them by the end of the night. While there, I had one (well, two) of the most delicious drinks I’ve ever had in my life: a strawberry lemon mojito. It was so perfectly summery and refreshing on a hot and sticky night that I hounded the bartender until he told me what was in it, which I wrote down, shoved in my pocket, and never saw again.

…until this week. I don’t know where it went, and I don’t know where it came from. One minute, I was sorting papers and the next minute it was in my hand. I was so excited about finding it again, not only to make for myself, but to share with you. How fortuitous that it’s strawberry season, I thought. I’ll make it and photograph the steps like a food blogger, I thought. This is going to be easy. This is going to be great. There was only an eensy problem in that the list wasn’t all that specific in terms of proportions or, well, anything. It reads:

I was going to have to improvise.

I don’t know whether shake ya booty was the name of the drink or my drunken way of saying that the drink needs to be shaken. The whole “voting liquor into the grocery stores” thing sounded like a great idea until it turns out that nobody stocks this specific strawberry rum on their limited shelf space. Did sugar water mean simple syrup? What kind of strawberry lemon juice? Would strawberry lemonade work? I could feel my confidence waning already. This was starting to sound like something on Pintester: one of those ones where she subs all of the ingredients and the preparation and wonders why it didn’t turn out. But I still had some hope that I could create something that bore some resemblance to the drink I’d enjoyed so much, and could tweak it from there, so I attempted to make it with standard mojito proportions, muddling some lemon, mint, and strawberry, adding white rum, simple syrup, and club soda, with a splash of strawberry lemonade.

It looks like perhaps food blogging is not in my future.

Mellzah vs the city of New York, Also Known As My Badly Photoshopped Vacation