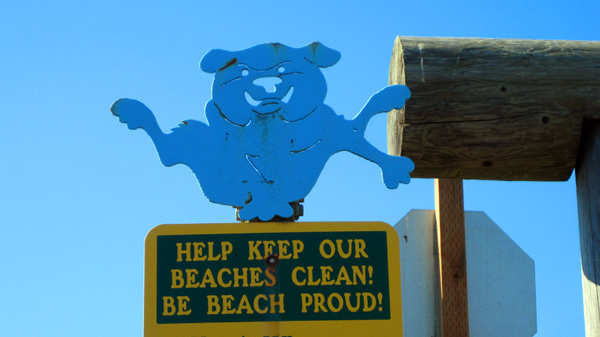 Since we only had a few days to spend in Long Beach this year, we tried to cram as much as possible into those days. So instead of sleeping off the previous night’s booze, we rose early and drove to downtown long beach to go for a morning horseback ride along the ocean. We arrived a bit too late for the first ride of the day, so we had an hour to kill in the area, which felt like much longer as nothing is open that time of day. During our hour, we spotted this charming sign: Really? At no point during its construction did anyone look at it and say “Gee, that’s an awkward pose, and it sort of looks like this dog has a big deformed ballsack”? Because it took me quite some time to figure out that it was intended to be a paw and NOT a ballsack, and it wasn’t just the early hour clouding my judgement. We also spotted some deer grazing in a nearby field, relatively unconcerned about the morning’s light foot traffic. This meant they kept eating instead of raising their heads or doing anything picture-worthy, so in a move that is bound to end either in hilarity or tragedy, I encouraged Jason to go near them with the phrase “Oh, they won’t hurt you, I just want some pictures.” Jason cautiously moved toward them, warning them “Hey deer! Predator moving in your area!”, and this is what happened:

Apparently we’re not so great at the menacing predator thing, even if we are the top of the food chain. Those deer weren’t thinking “Oh no! Apex predator!”, they were merely annoyed. In the event of some apocalypse that wipes out civilization, should we survive the initial impact, I don’t know how well we’ll fend for ourselves by attempting to annoy food to death. After the hour had passed, we went back to ride some horses. Two years is long enough to forget just how obstinate a horse can be, and as it turns out, their obstinacy hasn’t lessened in any way. This time, I was seated on an obstinate horse named Gunner, who seemed rarin’ to go, fighting to move forward as everyone else was still mounting their horses. Oh, he was rarin’ to go, all right. Rarin’ to go right back into the pen to eat some oats. It didn’t matter how much I pulled back on the reins, said “whoa”, or shot thoughtwaves of “I am going to have you turned into glue” at him with my brain, he wasn’t having it, and proceeded to trot right into the pen to chow down, with me dragged along for the ride like fat ballast. After he was forcibly dragged away by the wrangler, he then stood in line backwards with his head wedged into a corner like he was a little kid pouting. We were warned not to let the horses eat any of the dune grass as it’s not good for them, but Jason’s horse recognized that he’s a pushover and viewed the whole trip as an endless snack bar. CHOMP. CHOMP. CHOMP. “Hey, no, I don’t think you’re supposed to do–“CHOMP. We were furthermore instructed to keep some distance between our horses, which had been easy to do two years ago when it was just the four of us, but we had a lot of butt-sniffers in this group, which meant that horses were lashing out at one another with some frequency. I managed to mostly stay outside of the fray, but every once in a while, Gunner the butt-sniffer would wedge himself up in a group of horses just for sniffs and giggles. After the ride, I was helped off my horse by a five-year-old, which didn’t do much for my sense of self-confidence. I paid this child back in kind by not tipping him and hobbling away bowlegged.