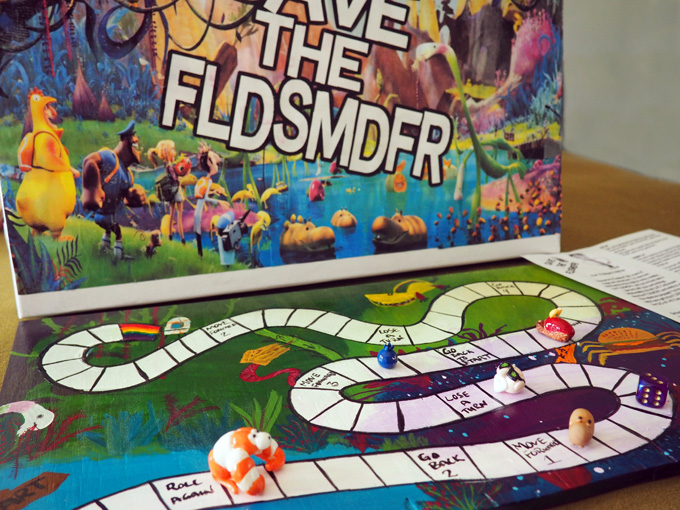 As I’ve mentioned before, Jason is the WORST to shop for, because everything he really wants, he buys for himself. This past Christmas, we’d already discussed that we didn’t want to spend a ton of money on gifts because it’s so easy to get caught up in an exponential increase in spending each year to try and top the previous year’s gifts. Let’s face it: we all have spending limits and less than an infinite amount of room for stuff.

I brainstormed for a while and decided that it would be really fun to make him a board game. We both have had a lot of fun playing board games together, but we’d had a bad string recently of games he bought that I hated. Mostly the sort with gigantic instruction manuals that you have to reference constantly throughout your turn, twelve different kinds of tokens to keep track of, and completely different rulesets for different players, so we’d be competing against one another and ultimately I’d lose because of something in the rulebook I hadn’t seen and then I’d be unreasonably pissed off for hours afterward. Ugh, kill me now. So I knew that I wanted to make a game with a simple ruleset where we worked cooperatively. Something fun, reminiscent of games we’d played as kids, easy to pick up and play, with a cute theme. We’d tried to go see Cloudy With A Chance of Meatballs 2 on our honeymoon with disastrous results, but saw it later and loved it, so I decided to infringe the hell out of their copyright for my personal enjoyment and made Save The FLDSMDFR. The object of the game is to reach the FLDSMDFR with one of the foodimals before Chester V arrives and takes it for himself. Players control their own foodimal and take turns moving Chester V, rolling a die and following the instructions on the board, having to land on the final rainbow space with an exact count. Should a foodimal and Chester V end up on the same square, there is a struggle determined by the roll of a die, the loser of which goes back to the starting square–in the event of a tie, both figures stay put. Between the struggle mechanism and various board features (which includes slides that move both ways), there’s a lot of back and forth in the game, and it’s generally anyone’s game up until the very end.

Jason and I have been enjoying playing so much that I ended up making him an expansion pack of foodimals for his birthday!

2 Comments → Makin Stuff: Save the FLDSMDFR