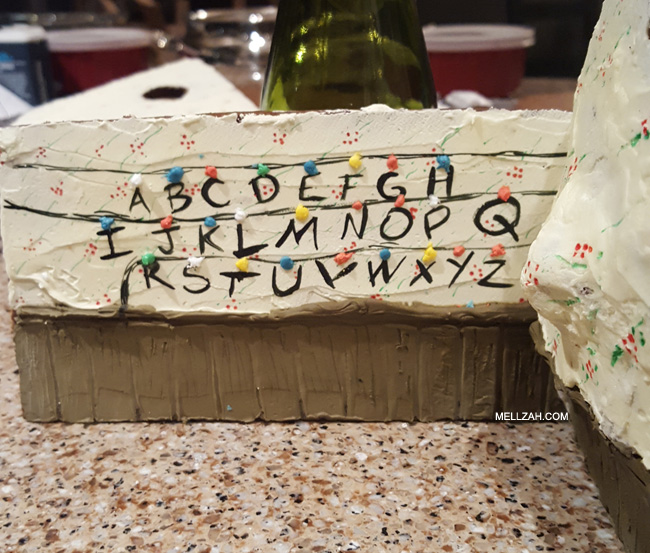 Like everyone else on the planet, I enjoyed the heck out of Netflix’s Stranger Things. I spent some time thinking about how I could rig up a Christmas card with lights that blink out “MERRY CHRISTMAS” or “RUN” or “YOU’RE NEXT” but I couldn’t figure out a non-digital way that wouldn’t be cost-prohibitive both to make and ship out 100+, not to mention I’d probably  be working on them from now until Christmas 2037 at which point Stranger Things’ faux retro will look real retro and the post office will be replaced with directly thought-beaming cat pictures into each other’s brains . But still–those blinking Christmas lights made the holiday season an ideal time for an homage if I could just figure out a good angle.

Finally, inspiration struck. I could make a Stranger Things gingerbread house! With lights and a demogorgon coming through the wall and gingerbread furniture with little marshmallow pillows and a frosting shag carpet and a whole “upside down” spooky tree area outside and and…WHOA THERE, MELLY. Considering I’d never made a gingerbread house before (except for one half-assed attempt at these cute little bastards that turned into a big honking mess in my kitchen with no tangible results, certainly no tiny cup-perching houses) or even royal icing, I was probably in over my head on just the house, nevermind all the gingerbread dollhouse furniture that would make it next level. I already needed to make frosting look like wallpaper, I had plenty on my plate without making some a plan so grandiose that I’d never actually follow through on it.

To make my Stranger Things house, I used this recipe (doubled) and this template (altered a bit to make the house a little more like Joyce’s). I also fashioned some of the gingerbread dough into a lumpy protrusion and tried to thin the edges so I could glue it on with frosting and make it look like something is coming through the wall without there being a corresponding divot on the outside of the house.

The part that I was dreading turned out to be the easiest–I slathered on some pale yellow icing for the wallpaper and dotted it with a toothpick dipped in food coloring for the pattern, the idea being not to mimic it exactly (which would be maddening) but to get close  enough to convey the idea of wallpaper. I then mixed up some brown and added the wood paneling. The letters and light wiring were painted on with black food coloring and a small brush. If I were doing it again, I’d try to pipe on the wires with frosting for a more three dimensional look, maybe pipe on the molding for more evenness.

As far as challenges go, I don’t know what sucked more: mixing all of those freaking colors of frosting (8! Mostly for those tiny dots of frosting for the strung lights) or assembling it. My parts weren’t quite perfect, the icing took longer than I’d like to dry, and the roof was so heavy that it wanted to slide straight off. All in all, I think it was a success! The outside could look more like Joyce’s house, and in fact, I cut some support beams for her front porch, but ultimately that would have made it too difficult to see inside, so I left it off.

I’ve got the gingerbread house, I’ve got the witch costume, all I need to do is lure in a plump child and Christmas dinner is settled. I mean, a ham. We’re having ham. Makin Stuff: Save the FLDSMDFR