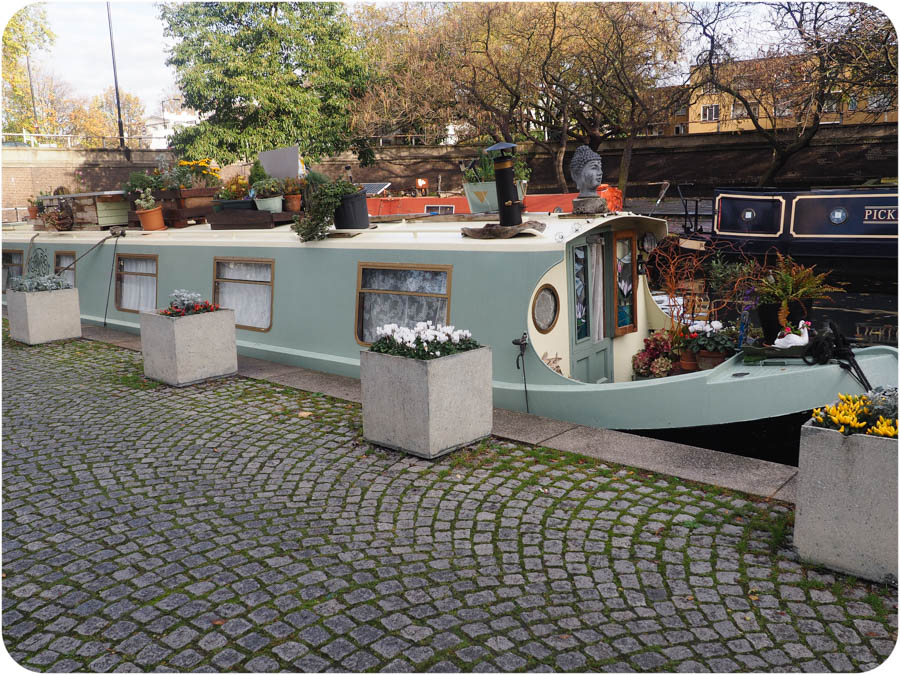 I no longer recall precisely how the map ended up in our hot little hands: whether it was given to us by the host of our AirBnB, or whether we picked it up ourselves from Paddington station. The important thing is that somehow I ended up holding the map whilst feeling impressionable: “Walk the Paddington Bear paw print trail!” and while I’m not particularly nostalgic about Paddington Bear, there was an area marked Little Venice with swans on the river and I thought “Oh! How charming!” and then I learned that there’s a little boat restaurant on which to have a floating tea and our walk there was a foregone conclusion.

It was charming upon first glance: a few well maintained cozy boats tied up, one trailing a floating dinghy that served as a garden. There were even a few swans out doing their swan thing. But not much further down Paddington’s pawprint path and it feels as though he might be leading you off to your watery garbage grave. Now, I have never been to Venice, but I find it hard to believe that the city that inspired so many quotes about beauty and grandeur consists mainly of houseboats with bags of trash strapped to the roof, and that’s the majority of what you’ll find in “little Venice”. The part of it that isn’t boats heaped with gas cans and glad bags is the canal itself, featuring a layer of floating rubbish thick enough to choke the waterway in its narrower stretches. I didn’t take any photos of the more murdery areas because it seems unnecessarily cruel to photograph someone’s home with the intent of mocking it on the internet;  you don’t spend your days living on a floating garbage barge because you have a lot of other great options. That said, I also don’t think this should be marketed as a thriving waterway with bustling cafes and shops, because that’s not what it is, in the slightest. London, you’re one of the greatest cities in the world–you don’t need to half-assedly crib off of another one for tourist purposes, I promise, just because a poet wrongly nicknamed the area such once upon a time. But if you’re going to do so regardless, might I suggest some waterway maintenance?  No one but Oscar the Grouch wants to take tea in a trash can.