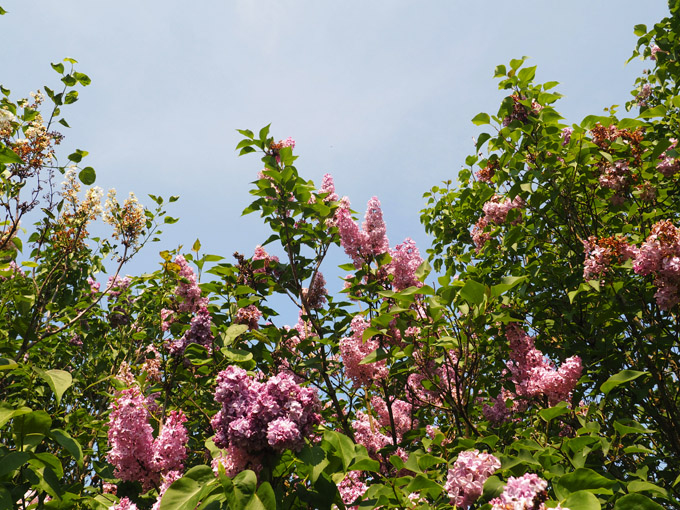 Lilacs are one of my absolute favorite flowers, so when I heard there was a celebration of lilacs in Woodland, I knew I’d have to attend. Lilac Days runs every year from mid-April to Mother’s Day weekend–you’re able to visit the grounds outside of those dates but that’s generally when they are in peak bloom. The grounds originally belonged to Hulda Klager, who had a passion for lilacs. She’d been inspired by Luther Burbank’s work crossbreeding fruits and vegetables and decided to try it herself. After successfully crossing two varieties of apple to get a one that would bake better, her mind turned to lilacs. She’d originally sent away for a number of good quality lilacs to begin her work, but her husband’s cows trampled all but three plants–so those are the ones she worked with.

And work she did. Lilacs are slow, sensitive plants. They’re easily shocked, so it takes three to five years after transplant for a lilac to bloom*.  Hulda would grow the seedlings on her porch for two years, transplant them into nursery rows after the second year, and two to three years after that, they’d bloom for the first time. After that, she’d leave them for another three years to properly evaluate their flowering and form, after which the majority of the plants will be destroyed because they didn’t exhibit the desirable qualities she was looking for. That’s seven to eight years after carefully cross pollinating the unfertilized stamens with a goose feather to know whether she’d had a successful cross or not–and her success rate was around 1 in 400. I’d have lighted the rows on fire around year three and worked on something less frustrating, like a 10,000 piece all one color puzzle. Hulda, however, didn’t give up, and by 1910, she had developed fourteen new varieties of lilac. In ten years, she had enough new varieties to show that she began to have an open house during the spring bloom to show them off.

In 1948, Hulda suffered a devastating setback when a huge flood put her entire farm (and most of the city) underwater for six weeks. Nearly all of her work was destroyed, but at age 85, she still didn’t give up. People who had acquired some of her lilac varieties sent her starts from their plants to replace what she had lost, and within two years, she was able to open her gardens to the public again. Before her death in 1960, it was estimated that Hulda had developed some 250 new kinds of lilacs! After Hulda’s death, her family sold the farm and gardens, and they were destined to be plowed under for a housing development. The local garden society heard about this and stepped in to save both the home and the lilacs, which is now a national historic site. With Lilac Days, The Lilac Society has kept Hulda’s tradition alive and preserved her life’s work, and you can see and smell more than 90 varieties of lilac that would have never existed if not for this tenacious woman.

The lilac farms were so, so gorgeous. Giant clusters of white, purple, magenta, and yes, lilac, flowers drooped  heavily from each tree. Every breeze carries wafts of their sweet scent. Not content with breezes, I buzzed from bush to bush like a bee, burying my face in the blooms and sighing with delight. Owing to the early spring, some varietals had already bloomed and declined by opening weekend, but many others were still in their full glory, along with a number of other flowering trees and plants, like magnolias and tulips. I was able to buy a bouquet to bring home which made the entire car (and now my bedroom) smell amazing and, even better, during Lilac Days, the society sells some of Hulda’s varietals to bring home, plant, and start your own mad lilac experiments…or just hang out and enjoy. By the time I went, they were sold out of (or weren’t selling any) of the intensely fragrant magenta Glory variety, but I was able to buy one of My Favorite, and I’m hopeful that it will thrive in my backyard. What a beautiful legacy Hulda Klager has left!

*I’ve felt this pain–I bought some lilacs five years ago and put them in pots on the sunny front porch of the rental house. Two years later, I bought a house and transplanted them into the ground. They leaf out but still haven’t done diddly squat in terms of flowering. Those jerks. EARN YOUR KEEP, PLANTS.