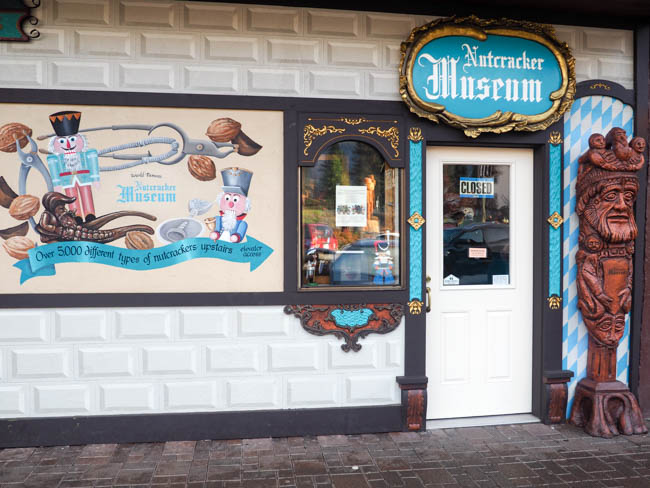 I’ve been to Leavenworth several times but had never made it to the Nutcracker Museum, as it was either closed at the time or there were group protests about it being “too creepy” even though the quaint shoppes there are already packed to the gills with creepy. Too creepy, you say? Too creepy?!? What on Earth could possibly be creepy about thousands of dead eyes staring at you from every directio–I retract the question. Come with me on a creepy journey, friends!

My first stop was at the museum website to ascertain that it would actually be open during my visit, which was a more important step than one would assume: they’re only open four hours per day, seven months of the year. If you’re reading this now and want to drop everything and head over immediately, hold your horses, because they won’t be open again until May. Sorry about energizing you with Nutcracker Fever™. But rest assured, you’re not the only one with Nutcracker Fever™, as the museum website also boldly claims that “all children love nutcrackers“. Not many. Not most. ALL. I certainly vividly remember the days of my youth colored by Nutcracker Fever™. Like all children everywhere, I loved nutcrackers. I had nutcracker sheets, nutcracker pajamas, and I begged Santa for the limited edition Bob Mackie nutcracker I saw in the Sears catalog. At school, my fellow children and I learned woodworking in the hopes of training our nimble fingers in nutcracker craftsmanship so we’d be accepted at Nutcracker College. On the bus, we swapped nutcracker trading cards (my most treasured possession remains a foil Rat King). In the evening, I used my nutcracker collection to shell nuts to dot my lightbulb-warmed treats in my nutcracker emblazoned EZ Bake Oven*.

Admittance to the museum is a paltry five bucks, which is a pittance given the number of nights since I’ve bolted awake, sweating, clutching the sheets while in the grip of Nutcracker Fever™. Upon arrival, I was directed to several rows of folding chairs set up in front of a tiny TV playing a grainy video about the history of nutcrackers. This is directly next to the person taking admissions, so unfortunately any smartass joke I would have wanted to make had to be stifled for the greater good of not being kicked out of the museum. This is Karl, named after his maker, Karl.

I knew before going in that the Nutcracker Museum contained one of the largest collections of nutcrackers in the world, but I don’t think I really knew just how many nutcrackers that entailed. After the video finished playing, I walked around a corner of nutcrackers for sale and found myself in a room filled with glass display cases with narrow walkways between them, all packed with nutcrackers. Outside this room is a small section filled with antique nutcrackers that no one is allowed to photograph for whatever reason, followed by a long hallway lined with more cases which leads to yet another room lined with still more cases. Don’t let my description fool you into believing it’s a labyrinth of nutcrackers: it’s not possible to get lost in this museum, but it is possible to become intensely claustrophobic. “Nuts all float down here, Georgie.” “Check out this Emperor Palpatine nutcracker,” I joked… …before finding a grouping of Star Wars nutcrackers. There was also a section on betel nut cutters, which is a nut that I have some familiarity with from my year in Taiwan. Often the sidewalks were splattered with red stains, which could have been blood, but was most likely betel nut juice. Chewing betel nut is supposed to have a similar effect to nicotine. A few slices of the nut are wrapped in a betel leaf, and chewing it releases a blood red juice which is expectorated wherever is most convenient (i.e. the street). At the time, these packets were sold by “betel nut beauties”: scantily clad women in small transparent booths along the street, which I believe is a practice exclusive to Taiwan although betel nut consumption is popular throughout southeast Asia. It’s not dissimilar to the bikini baristas found all over the PNW, and I wouldn’t be surprised if there’s a similar amount of angry local Facebook group posts looking for a “family friendly” alternative. Regardless, the Rotary warned us away from betel nuts, blah blah blah addictive, blah blah blah cancer…but you only live once, right? Might as well learn what it’s like to spit out a mouthful of “blood”, especially if you’re not like to be punched in the face or participate in community horror theatre. This’ll be the photo my detractors will use when I run for office. “SHE DRINKS THE BLOOD OF THE INNOCENT, DO YOU TRUST HER WITH YOUR CHILDREN’S FUTURE?” I don’t know why I find the name “nutting stone” to be so filthily funny, I just do. Hey, wait, this ISN’T a nutcracker! Why not both? All kids love nutcrackers! To the left of the nut guillotines are some shoes called “nutcracking shoes”. I’m pretty sure you could use them to crack whatever the hell you’d please, Gene Simmons. I also solved a personal mystery among the shelves. See that moon? I bought one exactly like it two years ago at an antique shop. When I bought it, I just thought the moon looked cool, and the man at the register exclaimed that it was a nutcracker. Over the ensuing two years, I still haven’t found a nut that it can crack–it just half-assedly spits them out of its moon mouth like some kind of low powered useless nut gun. It seemed probable that the antique store clerk had just lied to me to test the limits of my gullibility. Not so–it is indeed a nutcracker, just a terrible one. I suppose this is the Nutcracker Museum, not the Museum of Effective Nutcrackers.

Despite my Nutcracker Fever™, my eyes glazed over surprisingly quickly. “Well hey, that’s a nutcracker” turned to “Yup, still a nutcracker” turned to a vaguely amorphous nutcrackery blob. Perhaps if I’d played the nutcracker finding game, my attention would have been held for longer. What is the nutcracker finding game, you ask? The museum has different lists of nutcrackers to find, depending on one’s age and enthusiasm. For instance, one may be tasked with finding a Mickey Mouse nutcracker, an astronaut nutcracker, and a three legged man nutcracker. No word on whether they ask people to search for the Hitler nutcracker**, but he’s there if you have the fortitude to look for him. *I’m sorry, all of this is a hideous lie. However, a nutcracker was present when I learned the horrifying nickname my grandparents had for brazil nuts.

**Hitler IS there, along with some really racist caricature nutcrackers and a whole shelf of Confederate crackers. Because, you know, it’s not like they have enough other nutcrackers to fill the gaps if they were to take out the ones that implied some of their guests were sub-human. That would just be too much work, too tough of a nut to crack.

4 Comments → Let that be a lesson to the rest of you…nuts.