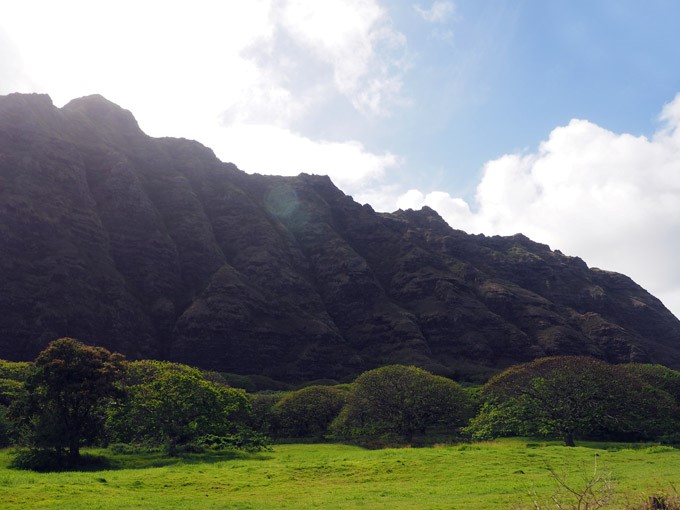 Before our trip to Oahu, I spent some time researching different things we could see and do, which ultimately led to this conversation. “Honey! There’s a ranch that you can tour and see the famous log from Jurassic Park!” “So you’re telling me that we’re going to fly six hours to go see a stick?” “…yes.” There’s more to Kualoa Ranch than their stick. I opted to take their movie site bus tour, which runs about 90 minutes and was the least strenuous of their tour options, which was unfortunately a consideration because I somehow managed to get sick on vacation again. The worst was behind me so I wasn’t creating a plague bus ground zero situation, but I definitely wasn’t up to anything more difficult than sitting on my ass and listening to someone talk. Luckily, the tour bus driver was serving up exactly what I was looking for, telling us about the history of the ranch, local flora and fauna, movie and TV info, and the occasional joke. The movie stuff was actually the least interesting part of the tour, which I never would have anticipated. While we drove to the first stop of the tour, the bus driver told us about Hawaiian land divisions, or ahupua’a. Land divisions would be determined by a chief, and they would generally go in a wedge shape from the mountain all the way to the water, encompassing all the land in between. In this way, not only did each land division contain all of the things that were needed to survive (and thrive), but it was also ensured that the land was being worked to its greatest potential. Hawaiians didn’t believe in owning land, rather, they were its caretakers. Land divisions were not private ownership, but they did share similarities–each land division would stay in care of the same family, passed down from one generation to the next. Those who cared for the land paid taxes back to the overseer, whose job was to collect goods to support the chief. It’s my understanding that Kualoa Ranch comprises the land that was once a land division. In 1850, an American doctor bought the land from King Kamehameha III. Since then, the land has been home to a sugar plantation, been occupied by the US military during World War II, and is now a cattle ranch, farm, movie site location, and tourist destination. Our first stop on the tour was at one of those World War II bunkers, built and abandoned by the military and reappropriated by Kualoa Ranch to display movie posters and other memorabilia. The bus driver warned us about the wind before we exited the bus, and I still almost lost my hat–I think the only thing that saved it was it getting momentarily caught in the rat’s nest I call my hair which gave me enough time to reach up and grab it. Much like the Pali Lookout and the Vista House at Crown Point, you could conceivably be blown away if you caught the wind just right. It wasn’t the wind that took my breath away, though. Look at that gorgeous water! After we finished walking through the bunker and gawking at the view, we re-boarded the bus and drove into the valley.  On the way, we saw some of Kualoa’s pipi (cows, but pipi is a much cuter name), a wild boar, and a native duck that is now endangered which the bus driver says is a tragedy because it’s supposedly delicious, which may or may not help to explain its endangered status. One more curve in the road, and we were in the Kualoa valley, filming location for dozens of movies and home to one famous stick in particular. There it is, in all its glory! Granted, it’s deteriorated somewhat in the intervening years since 1993, and you could basically throw down any log and tell me it’s the one from the movie and I’d believe you, but I wasn’t going to miss the opportunity to pose with it anyway. Because have you really lived if you went to see a famous stick but didn’t then pose with the stick and maybe photoshop a few dinosaurs into it later? I would venture to say you haven’t. After reboarding the bus, we saw some of the tracks from Godzilla (don’t get excited, it was from the Matthew Broderick one)–they had to fill them in substantially because the pipi were falling in at night and getting trapped. We also saw Hurley’s golf course from Lost, and a bunch of stuff from movies that didn’t crack 20% on Rotten Tomatoes. On our way back to the visitor center, we stopped at a spot with a beautiful view of Kamehameha’s Turtle and Mokoli’i, and then we were released and given the run of the ranch–to check out their petting zoo, pat horses, view their educational video, and (of course), press a penny or two. I made sure to do everything, and while their petting zoo was far from the world’s most exciting, I did greatly enjoy their tree goats. And I’ll always make time for horse snuffles. The stick may have been what brought me to Kualoa, but if I’m on Oahu again, I’d totally go back. The zipline tour looks fun, and I have it on good authority that the ATV tour is so fun it might make you pee a little. So maybe I’ll pack an extra pair of underwear, too.