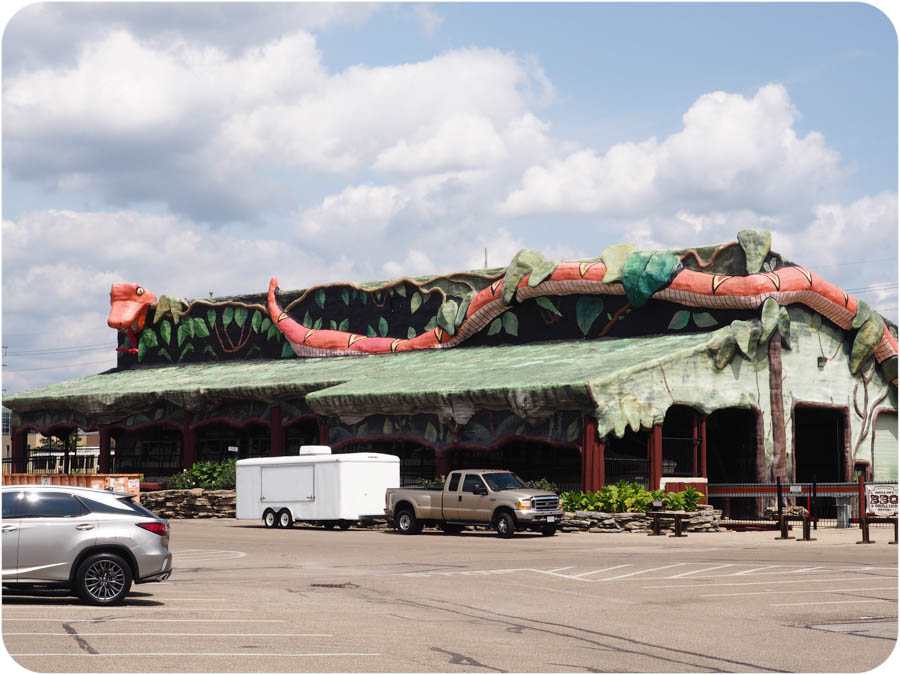 The Jungle Jim’s experience starts in the parking lot, with a monorail station entwined by a snake large enough to be given its own six movie series by the SyFy channel. Jungle Jim purchased the monorail cars inside from nearby King’s Island for the, uh, kingly sum of $1 when they closed down their wild animal safari ride in the early ’90s.

Originally, Jim intended to have the monorail track run all around the greater property, but as it turns out, even if you get the cars for cheap, installing monorail track is really expensive, so the track runs from the monorail station in the back parking lot to the storefront. The track runs. The monorail itself, to the best of my research abilities, only runs for special occasions, and my arrival sadly did not constitute one of those occasions, so we trudged from the back lot all the way to the front of the store, noting that many of the other businesses tucked into the complex have gotten into the statuary spirit. All except for “AVAIL Vapor”, which my mind insisted on turning into ANAL VAPOR, because of course it did. If I can’t ride it, then what’s the point? My father in law didn’t quite understand why I’d flown halfway across the country and driven halfway across the state to visit a grocery store, and that was because he had yet to behold the wonder that is Jungle Jim’s. Once we entered the store, I believe those questions ceased. I bought one of these gummy pickles and I can tell you for a fact that if real pickles tasted like its “real pickle taste”, I would never again eat another pickle in my life. Not even to make sure they still tasted terrible. NEVER IN LIFE. To be honest, I’m not sure if Jungle Jim is a wizard who lives in the jungle or if this is is his cousin, Wizard Jim, but either way, I appreciate the man’s dedication to dress up. As you might expect, this area plays Michael Jackson music on a nigh-constant loop. The British foods section had its own Sherwood forest, complete with Robin Hood, Maid Marion, and pilfered booty jammed up in the tree trunk. A grocery store so mighty it dwarfs King Kong! And somehow, after all that, it’s the toilet that’s famous.

I can’t even really convey just how massive this grocery store was, the multitudes of products it contains. An entire walls of hot sauces. An aisle of nothing but single bottles of craft sodas. A cheese section large enough to live in. Thousands upon thousands upon thousands of goods hailing from everywhere around the globe. All I can tell you is that I bought so much stuff that it necessitated shipping two boxes home, one of which USPS lost for three weeks, the box containing the above pictured gummy pickle. I was so happy when that prodigal pickle returned to me, at least until I tried it, at which point I cast it away and told it I wished it had never come back if all it was going to do was make me gag. JUNGLE WIZARD JIM, I TRUSTED YOU.