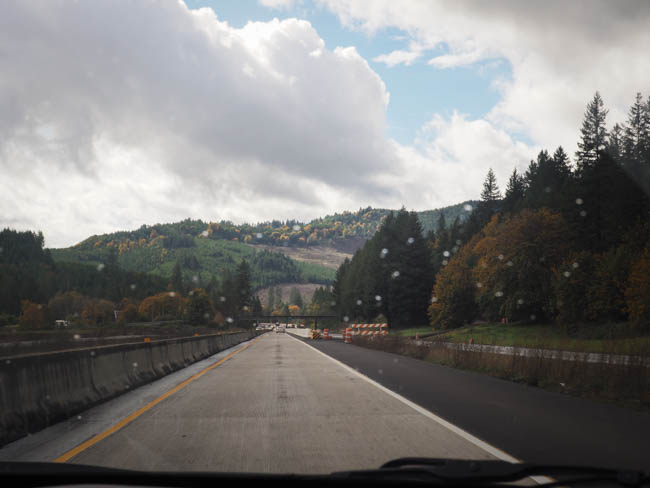 I’d first seen a billboard for Oregon’s Wildlife Safari way back in 2011 on my way home from my trip to Halloween Horror Nights. That trip was a hard push both ways and we passed by it in the dead of night in both directions. Every once in a while since then, Jason and I would  talk about going to make a visit, but it was one of those destinations that was always just a little too far to make it a day trip, and a longer weekend trip to that area just hadn’t been a priority.  Some friends visited Wildlife Safari this summer, and that reminded me to try and get down there–so when I was planning this road trip to L.A. and back, I decided to incorporate it on the way down. This, incidentally, meant I had to be ready to leave the house at 4am so that I wouldn’t hit morning commute traffic in any of the three major metro areas I’d be driving through, get to Wildlife Safari well before they closed for the day, and hopefully make it to that evening’s stopping point before dark (because, as you’ll see, it was a bit special and something to be appreciated in the light).

They really try to create an atmosphere at Wildlife Safari. A giant arched sign looms over the road, reminiscent of Jurassic Park. Other signs dot the winding roadway leading to the park, letting you know the animals are watching, that you’re in danger, and they know what you did last summer. I’m only exaggerating slightly. Cognizant of the fact we were being watched, when we arrived we pulled into the parking lot to step out of the car for a hot minute, stretch our legs, grab a snack from the trunk, and take a gander at the animal exhibits they have for people on foot. After pressing a penny (PRIORITIES), I spent some time looking at the adorable marmosets while they lounged and snacked. Those little tufts of fur they have on the sides of their heads are just too cute! I wasn’t here for this on foot business, however. My friend had fed emus while driving through the park, and that was exactly what I wanted to do. Unfortunately, at some point during the three month span between her visit and mine, they stopped doing car feedings because some of the animals were getting too aggressive. And I suppose I should be grateful for the fact that they stopped said feedings, knowing a thing or two about aggressive animals eating from one’s car. Aside from the no feeding thing, the rules were fairly similar to that of the Olympic Game Farm: you can roll down your windows, take as many photos as you like, but stay in the damn car–for your sake, for the animals’ sakes, for the sake of their insurance premiums. …They just look a little different than five year old me pictured them. You know, it’s probably for the best that something with horns this size didn’t approach the car, because it would gall me a lot to have a horn hole in a car I’m still making payments on. What all those signs at the entrance of the park didn’t tell us, however, was that the animals had moved from observing their human visitors to laying a series of traps for them–note the pallets scattered across the road, designed to either damage the tires and undercarriage of a vehicle or lure a Pinterest user out of the vehicle to claim them for their rustic reclaimed pallet wood farm table. Monsters. Just look at those smug bastards, carefully doing that thing where you are interested in something but make a show of looking away, feigning innocence. I see you, elk. I’ve done that look before. I know what you’re up to. Now, I’d like to talk about another important issue: the fact that I have been so indoctrinated into this pro-bear stuffed animal agenda that I don’t even see danger when I see a bear anymore. I look at those fluffy motherfuckers and think that they would probably give the best hugs in the universe, that we could sink into some fuzzy cuddle puddle and be bear and non-bear bestfriends and they’d even let me flip their ears around a little because they look extra soft and adorable. They even call big hugs bear hugs for chrissakes. What I am saying is, if I get torn apart by some steely bear jaws and claws, dig up Teddy Roosevelt’s corpse and sue him, because it is definitely his fault. His and the bear’s. LOOK AT THOSE EARS. Fuzzy and flippable. Huggable, snuggable bears. And then this emu caught me with my window rolled down and tried to cram his head inside and I was never more thankful for automatic windows, because they are actually kind of terrifying up close. That’s right, I’m not afraid of bears but I wouldn’t want to tangle with an emu, so you can see my priorities are a little out of whack. With our admission, I could have driven around the entire park twice if we wished, but I was satisfied with one loop. There were only a couple of cars there (I saw a number of employee vehicles driving around, but they aren’t gawking at the animals and waiting impatiently behind me to move already so they don’t count), so I got to spend as much time around each animal group as I wanted, which was completely different from my bumper to bumper Olympic Game Farm experience. Plus, by the time I finished one loop, the rain was really starting to come down which isn’t conducive to wanting to spend a bunch of time idling with one’s windows down. Directly across from the road that leads to Wildlife Safari is a Noah’s Ark themed restaurant, with signs reading: NEW OWNER MUMMY OUT OF EGYPT! DINO SKULL! JURASSIC ARK! ESPRESSO! HALIBUT! PEPPERCORN STEAK! and I can only assume that the new owner is in fact a mummy who serves up animals who have set their last trap at the wildlife safari and has brought in some dinosaur stuff and peppered his steaks to jazz up the joint. I mean, that’s the only obvious conclusion, right?

“Stay out of my territory”: Breaking Bad in Albuquerque