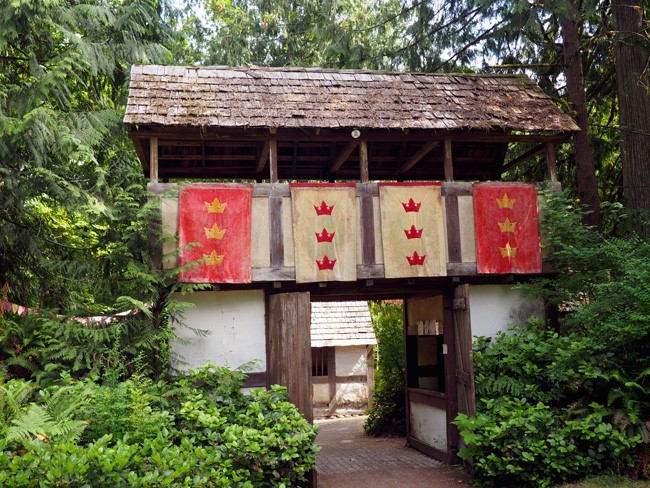 It comes as no surprise to anyone that most of the medieval and renaissance faires are a little light on the historical accuracy. People expect bold knights jousting on stately horses, queens doing queen stuff, turkey legs the size of a toddler, and signs with “ye olde” in front of them. I’ve previously stated that “The best part about visiting a medieval faire, ANY medieval faire, is that none of them are authentic.” And that was misinformed–because Camlann Medieval Village aims to be the counterpoint to those faires, a living 14th century historical museum, complete with monthly medieval feasts served with meticulously researched recipes.

Because these sorts of things are always more fun in groups, I recruited some friends to partake in the pageantry and excitement of the Midsomer Festival. Archery! Sheep patting for young and old! Minstrelsy and puppet shows! All capped with a twelve course feast! And the truly adventurous could rent period garb onsite to really get into the spirit of the day. We joked about having to send our reservations in by mail, wondering if they’d be rejected because they weren’t properly sealed with wax or delivered by trained raven. The only problem was figuring out when and where we should all meet, because everyone had different obligations and goals for the day. I decided to try and arrive early just so I wouldn’t miss anything. I needn’t have worried about missing anything, as there was actually very little going on. The sheep had zero interest in being patted by the young or the old, the archery and candle dipping were only available to those who paid an additional fee, and it was over 90 degrees in the shade so there was no way on earth I was going to layer a neck to ground crushed velvet dress on top of my street clothes. So after I looked at the blacksmith and the potter and felt like a fool interacting with a historical reenactor (she invited us into her cottage and I read at the entrance that you weren’t supposed to ask any modern questions so I fumbled around and eventually came up with “Uh..what manner of..uh, fowl, doth that wing be from?” which I’m sure was completely wrong in both language and phrasing and then when she answered, I nodded, looked pensive for a second and was like “Well…bye!”), I sent a message to the group warning them to push back their arrival closer to the feast. I then farted around, taking pictures, and eventually made my way to Boar’s Hede Inn in the hopes of getting something to drink. I waited, and waited, and eventually a man in a historical outfit came to the front and asked if he could help us. When I inquired as to whether they sold beverages, he told me that just then they were only serving a hot meal.

Ooookaaay. So I understand that they’re trying for historical accuracy and that a coke machine would look really out of place plugged into their book shoppe, but it is a problem that the only way to get a drink of water in the entire village is to beg the workers to take a sip from their communal cuppe. It is more than a problem, it is fucking ridiculous to encourage people to traipse around in winter-weight fabric during a heat wave and have nothing on site for them to drink. It’s asking for heat stroke and a lawsuit. The actors were apologetic but said that Camlann has been struggling financially and can’t afford to hire people to sell drinks, which I don’t understand, because drinks are generally profit centers. EVEN SO, if they don’t want to hire someone and outfit them in period garb and buy and store and keep track of more stuff and deal with the increased amount of garbage (which I understand), they should at least make it clear on their website and at their entrance that they don’t provide these services and encourage people to bring their own. Especially if they’re already struggling financially. All they need is one kid to keel over and they’re done. I ended up leaving and killing time in town with a beverage until about an hour before the feast, at which point I decided that the only way to properly get back into the spirit of things was to buy myself a flower crown. And where Camlann lacked in their guest services, they made up for it in flower crownnery. The wonderful woman who made my crown (whom I later found out is a friend of a friend, because I live in a very small world) asked how big and bold I wanted my crown to be, and I told her that I wanted it to look like a garden had exploded on my head, and ideally I should be able to use it to camouflage myself in case a bear wandered by. She was happy to oblige and made me the most hands-down-flipping-gorgeous piece of headwear I’ve ever seen, much less worn. I felt like Queen Titania, only jeans-clad and sweaty. Eventually the appointed time came, and my friends and I met up outside the Boar’s Hede, not quite knowing what to expect. They don’t allow any photography or video into their feasts (presumably for reasons of ambiance), though they did post the menu online so we’d have some idea of what we’d be eating:

TRENCHER BREAD (to eat & to eat upon)

STRAWBERYE  (a berry and almond pudding)

After some confusion about where to line up, we were all led inside and downstairs to their feasting hall that was elaborately decorated floor to ceiling in medieval art and seated around benches shoulder to shoulder and told how things were going to go. First we were to rinse our hands with their floral water (because we’d be eating with our fingers), then we’d be given a trencher (a large round circle of bread, much like the bottom half of a hamburger bun) to place our other courses upon. We could also eat our trencher, but were instructed to do so sparingly so as to not find ourselves without a plate. Food was to be served family style, passed down the row to about twelve people, and if I thought it was hard to to visually gauge a one-sixth portion of a thai lunch, it was even harder to gauge a one-twelfth portion, which meant that I took tiny dribbles of everything and the dudes at the end who didn’t need to worry about the appetites of their neighbors ate like damn hell ass kings. I snuck one photo because I’m a bad person and an enemy of ambiance. But look at how beautiful this medieval hall is!

My impressions of the first course were as follows: meh. The trencher was ok, and the salad was just bitter green leaves by themselves. The cinnamon pepper steaks were oddly sweet in a not-pleasing fashion. The crust on the pork and cheese tart was very good, however, and while the bowl of almond worts looked like curdled milk barf that I was very hesitant about spooning onto my trencher (which probably also has something to do with their “no photos” policy), it was good as well, as were the plums. About ten minutes after we had started eating, we were served a small amount of wine or juice, according to our preference.

The room grew hotter and hotter and though we started as a group of forty strangers, we began to bond over our shared misery. One of the guys at the end of our serving row talked about the Buckley Renaissance Faire’s ice cold pickle wench so longingly you’d think she granted wishes rather than sold pickles. I demanded to speak to the Lord of Camlann because I had some grievances to air. People started begging for more to drink, saying that they’d pay extra, and were denied. We joked about this being what feasts in hell must be like. Someone on the other end of the long table tried asking about the food in ye olde Englishe and everyone laughed. People started clanging their pewter cups with their knives, and as we sweated and our stomachs rumbled and our mouths ached for moisture, it began to feel like the kind of environment in which peasants revolt and begin burning down buildings. What is it with this place and beverages? I understood going in that Camlann was not Medieval Times, but is there something about perpetual thirstiness and the serfs that I missed in history class? For my $45, I didn’t expect knights jousting in front of my table, giving me their favors with all of the pageantry you’d find at some other kind of medieval faire, but I did expect that my basic needs would be met.

To kill time while the cooks were clearly struggling in the kitchen, the same guy acted as our “courtly minstrel” and sang us a couple of deeply cringeworthy songs, one of which was about riddles and somehow made me hate riddles more than I already do, which I’d previously assumed was an impossibility. FINALLY the second course came out, and after that, our second thimble of wine. Second course: Also mostly meh. The leeks and bacon were good, but that was pretty much the only standout. The strawberry and almond pudding was essentially jam. The sweet beef was really unpleasantly sweet, and what I’m assuming was the leeks and quail (chicken at our feast) was mixed with some kind of dry ginger spice and not mixed well, because in my small portion, I got a huge pocket of spice in my mouth and it was horrendous. I was so glad that I’d brought a bottle of water back with me from town, but even that was at the dregs.

After all was said and done, we were told that Camlann is a nonprofit and should any of us feel so moved as to write them a verrye larrge cheqque, that it would be much appreciated, and for a mere $100,000, I could have my likeness rendered into a stained glass window as a saint, which I feel is a bargain at any price. I obviously can’t fling around 100k, but I do very much like the idea of Saint Mellzah, Picker at Food and Swearer of Swears. I then enjoyed a thirteenth course of Menchie’s, pantsless, in my flower crown and didn’t share anything with anyone. It was glorious.