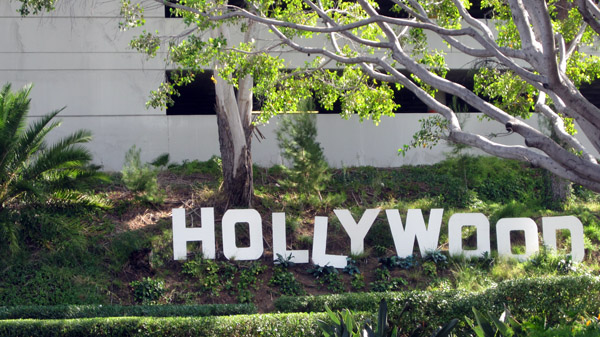 …I never knew how tiny that sign actually was.

We left for LA on Thursday evening as soon as Jason got home from work, making our way to the tiny town of Yreka, California before having to stop to rest. (I was glad we were finally through Oregon–it’s not that I have anything against the state, but as you aren’t allowed to pump your own gas, stations tend to close at night rather than manning them 24 hours a day, which made for an, uh, interesting tour of Roseburg where I first attempted to illegally pump my own gas at a closed pump and then drove around town until I finally found an open pump, at which I waited ten minutes for the operator to sashay his way over to the car.)

Once in Yreka, I initially pulled into a rest area, intending to nap for twenty minutes and then hit the road again, but as Jason tossed and turned and huffed and puffed on his seat, moaning, “This is so uncomfortable. I thought we were going to stop at a motel. I thought that was the plan.” I realized it wasn’t fair for me to change the game plan on the fly without consulting him, even if it meant arriving in LA later than I would have liked. So I drove us to a nearby motel and had five hours of overly caffeinated, jittery dreams, hitting the road at about 8 am, putting us on pace for an arrival at our hotel around 6pm.

Along the way, we stopped for Jason’s first taste of In N Out burger, saw tons of cows along the road (aka baby In N Out burgers), and, during the hottest portion of the day, the highway came to a complete stop and we got to watch the car’s temperature gauge click up…and up…and up…and up, all while panicking and cursing a little. Luckily, after clicking off the AC (which, in that car, means “blast slightly less hot air directly into your face”) and a few minutes of backed up traffic, the roads opened up again and the gauge went back down into the normal range. After checking in at the hotel, and finding our room, tucked back in the “loser corridor” away from the main hotel rooms, we went to the concierge to get directions to Hollywood Blvd. The Sheraton Universal hotel’s website indicates that it’s within walking distance, so I thought it was just a matter of having him point us in the right direction. Not so. It’s technically within walking distance, if you consider walking distance to be “Walk to the subway station and then take the subway to your destination,” otherwise, it’s a mere casual stroll over a mountain range.

Not ones to be deterred by such technicalities, we made our way to the subway system and were immediately befuddled by their ticket-selling system. They sell passes that can be used across their entire transit system, but if you buy a one-way pass, you walk through a separate stall, which doesn’t verify whether or not you have a ticket. At no point does anyone verify whether you have a ticket, and since the majority of the people use passes, it wouldn’t even make financial sense to have someone roaming the stations, asking to see ticket stubs. What, exactly, is stopping anyone, everyone, from riding for free? Aside from being pansies from Washington, too dorky and law-abiding to try and skirt the rules? We didn’t spend a long time on Hollywood Blvd that evening–just long enough to have dinner and map out the area for tourist activities the next day, but it was still nearly 10pm by the time we were in the subway station waiting for the train to take us back. We waited. And waited. And waited. A train showed up on the other side, and a garbled announcement was made on the overhead speakers, but I couldn’t hear it over the rowdy teenagers shouting and fighting nearby. We waited some more. And after that, we waited some more. On our side of the station, a man in a wheelchair cut pieces off of an onion bagel and flung them down onto the tracks, yelling “You all is stupid, waiting on the wrong side of the tracks. Crazy! Trains is all on the other side. Asshole! Shitbreath! Cuntstain! Wrong side trains!”, each exclamation punctuated by another piece of bagel chucked onto the tracks below. I leaned into Jason and whispered, “So…the man throwing bagels onto the tracks says that all the trains are coming on the other side of the station. But other people are still waiting on this side. Do we listen to the bagel-throwing man?” Jason replied “I think it means we should take a cab.” “Not after I paid for these tickets, it doesn’t! Shitbreath!” We approached some friendly-looking people, and as it turns out, they were tourists as well so they couldn’t be of much help, though they did say it seemed as though the trains were running in both directions from one side of the platform at this stop, as they’d gotten on the previous train and it announced it was traveling in the opposite direction. So we waited, and waited, and waited, and sure enough, the bagel-throwing man was correct. After finally making it back to the hotel, we showered off 30 hours of road sweat, grit, and the occasional french fry out of our various nooks and crannies, and collapsed on the bed so we could get a solid night’s sleep before the long day ahead of us.

“Oh Homer, of course you’ll have a bad impression of New York if you only focus on the pimps and the chuds!”

4 Comments → “It’s one of Nature’s most beautiful sights — the convoy.”