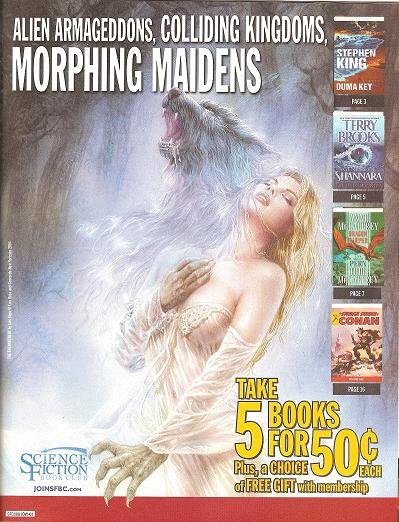 Yesterday, I opened my mailbox and found this: GOD, NO. Why would you do this to me, people of the science fiction book club? Why would you send me mail with a scandalous cover that implies that perhaps I’m into skanky werewolf sex like some sort of goddamn sci-fi FURRY? Why would you put this ‘art’ on the cover, through the mail, for my klepto mailman and in FULL VIEW OF THE NEIGHBORS? This could well ruin my political career! NO ONE IS GOING TO VOTE FOR A SCI-FI FURRY. OH GOD THIS IS ALMOST WORSE. Don’t call me ‘changeling’. I’m not a ROLEPLAYING sci-fi furry. I don’t put on capes and costumes and howl at the moon! Why did you do this to me, science fiction book club? WHY? What made you think that this was a swell idea, that I would respond to this sort of thing in a favorable manner?

The one thing we *have* learned from this is that my klepto mailman is clearly ALSO not a sci-fi furry or this would’ve disappeared as well, just like matadin‘s cthulhumas package.

The politics of failure have failed! We must make them work again!

I’ve also discovered that this post fits right in with ‘Lupercalia’ which is what the Christians transformed into Valentine’s Day–a festival about werewolves, blood, and fucking. So….uh. …yay appropriateness?