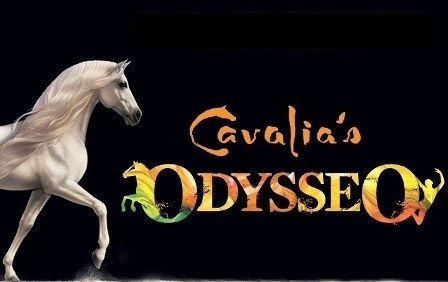 A couple of years ago, Jason and I attended Cavalia, an equestrian and acrobatic show that’s essentially Cirque du Soleil minus the clowns and with horses, and I loved every minute of it. When I saw a billboard for their new show, Odysseo, I mentioned to Jason that I’d like to attend. The next day, he sent me a message: “Do we have plans for SATURDAY, FEBRUARY 22, 2014, 8 P.M?”  There was no way he hadn’t directly copy/pasted that from a ticket purchasing site, and I couldn’t play it cool for even a second. “No…are we going to the horse show?!” “No, I, uh, signed us up for a, uh…cross-stitching class.”

I needled him about cross-stitching class constantly in the weeks that followed, asking about where it was, what we were learning, their flowing manes, but he stuck to his story, finally exhaustedly presenting me with the tickets on Valentine’s Day. Because nothing says “I love you” like the end of weeks of pestering. Little did he know that while it was the end of waking him up with a flashlight in the middle of the night to interrogate him about our supposed cross-stitching class, it was also the beginning of shaking him awake in the middle of the night to let him know exactly how many hours until horse show time. What I’m saying is, when his coworkers would see how wretchedly tired he looked, waggle their eyebrows, and say something coy about newlyweds, they really had no idea.

When the day finally came, we followed standard protocol and removed all cash and means of credit from my person, and not a moment too soon, as Cavalia has stepped up their merchandising considerably and moved it front and center, so within seconds of entering I was squeezing supersoft plush horses to test their fitness as a friend to Napoleon (verdict: ringing in at $100, they are much too fine for the ten minutes of ass-ripping they would endure in my household). They’ve also got DVDs of this show and the previous one, soundtracks, calendars, shirts, scarves, etc–the usual. What I didn’t see, and what no force on Earth could have stopped me from purchasing, were the SkyRunners, because I’ve got a number of bones in my body which have never been broken, and I’m certain they could help me remedy that particular problem. Our seats were pretty excellent; as we were off to the side a bit and angled to see the arena, there actually were no seats in front of us so I didn’t have to worry about the Jolly Green Giant sitting in front of me and blocking my view, which is what normally happens to me at every event. When I saw RoboGeisha in the theater, I couldn’t see the subtitles at all, so I essentially invented my own reasons for why someone might gouge out another person’s eyes with shrimp tempura. When I saw That1Guy recently, the tallest man I’ve ever seen in my life came in three quarters of the way through the show and pushed his way through the crowd until he was standing directly in front of me, and this was so inevitable that I only wondered what took him so long; maybe he lost track of time while shooting himself up with human growth hormone.

The show itself was amazing and beautiful, showcasing strength, athleticism, beauty, grace, and precision. The horses themselves are extremely well-trained, but they’re not forced to do anything they don’t want to do, and that gives the overall production a sense of spontaneity and wonder that it may not have if everything were clockwork. With their enormous screens, sets, and costumes, you’re transported from an enchanted forest to the African savannah, from Easter Island to space itself; woven throughout are the strands of companionship between human and horse, the appreciation of beauty in motion, and the joy of being alive. They incorporated all of the traditional dressage of a Lipizzaner show, but made it entertaining instead of godawful like an actual Lipizzaner show.

There’s a short intermission between acts, during which Jason asked me which part was my favorite thus far. “Every part. Every part is my favorite.” During said intermission, they send someone out in a mini steamroller to pack down the dirt in the arena; you can totally see him out there steamrolling behind the curtain in careful circles, making sure each part was packed down perfectly. The only suggestion I have to the producers is that they could turn the intermission into a little steamroller ballet–put a few of them out there, set them to music, and have them perform some of the same movements as the horses.

While both Cavalia and Odysseo were excellent shows, of the two, I prefer Odysseo, as it integrated the horsemanship and acrobatics more; at some points during the show, it felt like there was so much to see that I couldn’t possibly take it all in. They’ve got four more shows in Seattle before they leave: don’t miss it!

The City of Versailles: Horses and Hearses