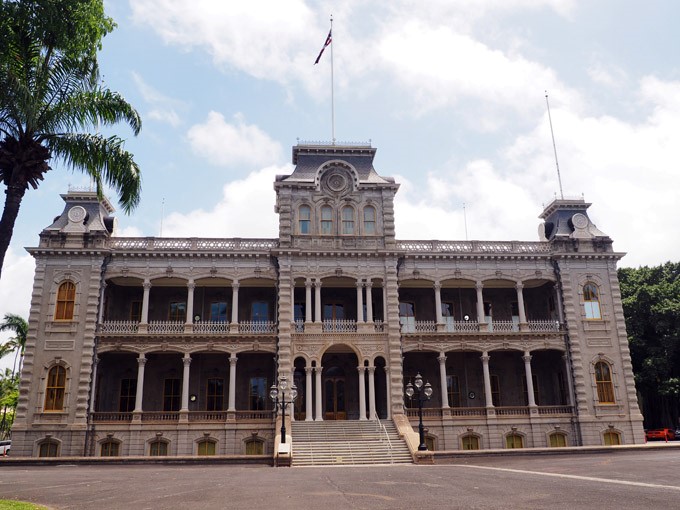 How dare these people spelling-shame the king like that?

Iolani Palace is gorgeous, full of history, and its restoration is a testament to the dedication and artisanship of the people who devoted their time to the project.  Unfortunately, the tour experience is less well-designed.

When I arrived, I parked on the street outside; this turns out to be the wrong place as you’re supposed to park inside the gates. The parking lot signs inside the gates indicate that you need to have a government pass or pay or you’ll be towed–the woman working at the gift shop insisted that it was free to park for everyone. The hours for self-guided and docent-led tours vary wildly from day to day which means that if you specifically want to take one type of tour or the other, you need to plan your day around your visit. As it turned out, on the date and time of my visit, they were only having the more expensive docent-led tours. After I ponied up, I was directed to go watch a video about the history of the palace and its royalty, but the video was timed as such that I had to leave before it was over in order to make my tour time, which would be such an easy thing to fix considering they know exactly how long the film is and exactly when each tour group leaves. And then there was the docent.

The quality of every docent tour is dependent on the quality of the docent and in a deeply unfortunate turn of events, I hated mine almost immediately, which is rare for me. If someone wants to talk about something they know and are passionate about, I want to hear it. I always want to hear it. I’ll stand there and listen and suck it all in like a sponge. I loathed this woman. Deeply. And the feeling appeared to be mutual. She talked down to the people in the tour group. She yelled at Jason when the back of his shirt brushed against the wall for “leaning on the wall”. She yelled at me for walking out of a room in front of her when she’d just asked us to proceed back out into the hallway. Wildly inconsistent, sometimes she did have us leave the room before her, toying with us like the world’s pettiest tyrant.  She talked about the bus system on Oahu and how her job pays for her bus pass. She talked about current politics. She talked about personal interactions she’d had with other tour groups. When we chanced to happen by another tour group, I was incensed to discover that group was actually getting to learn something rather than being scolded like puppies who piddled on the rug.

So much happened here: It had electricity and telephones before the White House! The monarchy was crippled and later overthrown in a massive betrayal by the Queen’s foreign advisers! The Queen was imprisoned in one of its rooms! It was turned into a government building, all of its exquisite and rare koa wood was completely painted over, the place got riddled with termites, and it was almost razed! The furnishings were all sold and had to be reacquired piecemeal and restored to its original condition! So tell people about that, because if they’re visiting this site, they should know what’s been done to Iolani Palace, what’s been done to the monarchs who resided there, what’s been done to Hawaii. This is the site to impress upon people those weighty histories. As it stands, I learned more from five minutes of video than I did in the entirety of my tour, which is a sad shame. So maybe save the bus pass talk for bunko night.