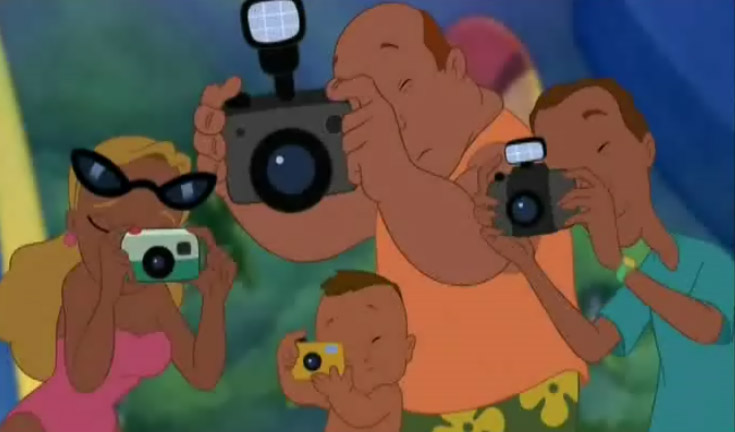 “Please be a traveler, not a tourist. Try new things, meet new people, and look beyond what’s right in front of you.” – Andrew Zimmern

“The traveler was active; he went strenuously in search of people, of adventure, of experience. The tourist is passive; he expects interesting things to happen to him. He goes “sight-seeing.”” – Daniel J. Boorstin

“If it’s tourist season, why can’t we shoot them?” -Anonymous

Picture  a tourist in your head. Mostly likely, you envisioned someone with a camera strapped around their neck, wearing ill-fitting shorts, some manner of shirt with a tropical print or beer logo on it, fanny pack clamped to their waist, and a stripe of sunblock down their nose. Maybe they were even wearing socks with sandals. You may have additionally determined that this person is ignorant of the local customs, of the language, and is looking for the most mundane, prepackaged  experience and wondering how they can find the closest Applebees. Don’t get too caught up in your elitist fantasy: that person is you.

Now, you may not necessarily look for a place where it’s “always Friday” and you may have studied the language or read up on the culture. You may dress impeccably. But if you’re visiting an area in which you do not live for the purposes of pleasure or experiencing culture, you’re a tourist. Tourist shouldn’t be shorthand for ignorant, but it’s been this way for years: people mutter about the “damn tourists” in their town, and fancy themselves “travelers” instead, romanticizing a synonym, waxing rhapsodically about their style of travel,  and drawing imaginary contrasts between  the two words so that they can justify looking down their collective noses.

Lately, the buzz on blogs and magazines and even television is to travel “like a local”: do what locals do, eat what they eat, sleep where they sleep in order to have a more “authentic experience”. It’s a new way to draw a line in the sand between what they do and tourism, and it’s equally arbitrary, and equally rubbish.

Locals eschew the wonders in their own backyards

How many times have you talked to a friend who lives in another city/state/country and asked them about a famous landmark or activity, only to have them respond “Oh, I’ve never been there.” You think “What?! Why not? How is that possible, you’re right there, it would be the easiest thing in the world for you to go!” Turn that eye inward: what in your area have you been “meaning to visit” and “not gotten around to”? A museum? A famous building? A natural landscape? A highly-rated and/or expensive restaurant? How much do you know about local history? Would you say that someone who travels to the area should follow in your footsteps, that it would be the best way to experience the area?

“Like a local” fetishizes a certain type of local

“Travel like a local” is, at its best, disingenuous. The people filling their Pinterest boards with high contrast photos of exotic locales with twee quotes about travel written on them aren’t aching to actually travel like a local. They don’t want to get a shitty job, come home to an overpriced, poorly furnished craphole of an apartment, eat something from a can, and worry about bills. No, they want to travel like a local rich person: someone who doesn’t have to work,  eats 16 course tasting menus,  and whiles away their days on a lazy bike rides. It’s not that those are bad things, they’re just not the experience of the average local. You want to see new places, make new friends, try new things, and that’s grand. But you don’t want to travel like a local. Not really.

So many travel guides recommend you locate expat hangouts because you’ll be able to get a wealth of information about the area from them and may be able to cultivate a “local” friendship while you’re in the area. That’s partially true. What you’ll mostly find among any group of expats: an unbelievable amount of complaining. The weather, the traffic, the people, their customs, the food, the health care, the cleanliness…if you sit among a group of expats, what you’ll learn is that everything is terrible, that they hate it all, and everything is so much better back home. This group commiseration is normal; they’re no longer in the honeymoon period, and they need to vent with a group of people who will understand their frustrations. But is that really the best  way to see a country: through the eyes of the disenchanted?

There are no secrets

We live in an age of boundless information. There’s plenty that an individual can learn, but there’s scant “discovery” left on Earth. We were born too late to explore Earth, and too soon to explore space. What’s left is tourism and individual enrichment. You can profess that you have “the heart of an explorer” but the reality is that there are no “best-kept secrets” anymore.  There are no restaurants that only locals know about in the age of Yelp and blogs. If people like something, they talk about it. Even the best restaurant in the world will go under if no one knows it’s there! Thus, the rub with the “travel like a local” crowd: Are you not going to visit the highest-rated places just because tourists know about them now, too? Which do you want more: the experience or the sense of elitism?

You’re not fooling anyone, anyway

You may have learned some French in high school, maybe brushed up before your visit with the Rosetta Stone. You may place orders in French and dress très chic, sitting at a cafe with your croissant and coffee with nary a fanny pack to be seen. Still, one wrong ‘vous’, an unusual accent,  will out you. And yet the world will not end. Locals may actually be more inclined to help you: to give directions, to be more patient when you’re fumbling with their currency or language. And there are some areas of the world in which you never could pass as local, no matter how long you spend in the area…and that’s ok, too.

Tourism makes the world go ’round

Well, not literally. Physics does that. But economically, tourism is vital, regardless of whether you’re eating at a street vendor or a chain restaurant. Tourism bridges gaps between disparate cultures and peoples and creates opportunities for employment for locals. To roll your eyes at those who visit Paris and beeline toward the Eiffel Tower or those whose primary goal when visiting Seattle is to go to the top of the Space Needle is to roll your eyes at tourism itself: the impetus felt to see a wonder in person, to touch history, and to better understand the world we live in. No, locals may not visit those places more than once, if ever, but sites that drive tourism are just as important as your favorite hole-in-the-wall bagel joint. Moreso, actually, as they bring money into the area that’s vital to growth and allows smaller spots to survive that otherwise wouldn’t.

You may only get to visit once

Ironically, there’s no one more dedicated to avoiding tourists than the elitist tourist. I once read an article about a woman who took a class on her trip, just so she could smugly ascertain that there were no other tourists present. …Congratulations? Unless you’re an heiress, you’ll never have as much travel time and money as you’d like. The average American earns one week per year, and of that week, uses four days of it…that is, if your employer offers paid vacation at all and doesn’t penalize you for actually taking the vacation time you’ve earned. Disneyworld may claim “it’s a small world after all,” but unless you make travel a priority in your life, you’ll likely never visit all of the places you’d like to go. So why would you spent your  travel time trying to live up to someone else’s standards for where you should go and what you should see or feel embarrassed about what you like?

If you want to visit every tourist trap on Earth, visit every tourist trap on Earth. If you want to rent a room through AirBNB and only eat at Michelin-starred restaurants, go nuts. If you want to hike across a country, do it. Don’t let any magazine or elitist hipster douchelord blog tell you that you’re doing it wrong, because “the best way to travel is ____”. When it comes down to it, no matter how you style your trips, you’re a tourist…and that’s ok. It doesn’t make you ignorant, or disrespectful, or anything other than someone seeing the world on their own terms.