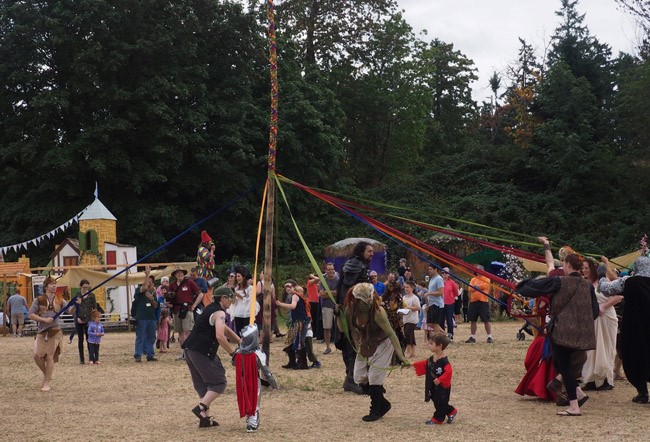 If Camlann Medieval Village is an accurate portrait of a quiet 14th century medieval village, the Washington Midsummer Renaissance Faire is the 14th century Disneyland. It spans three weekends in August, with three distinct themes,  different performances depending on the weekend and a schedule that’s so jam-packed that you could not see everything in a day unless you were really goal-oriented, which is why some people choose to camp out on the grounds for the weekend. I chose to make a go of one jam-packed day during the third weekend, Her Majesty’s Royal Masquerade, where visitors were encouraged to don their most fantastic masks and join the merriment.

My first stop at the Faire was Cirque du Sewer, the only show with an acrobat, trained acro-rats, and an acro-cat (also: an assistant in a hat, and instead of a mat, a poop towel). The show was charming and delightful, though I did once have to suppress my gag reflex when she placed one of the rats on her head and brushed its tail behind her ear like it was her bangs. I don’t know why that revulsed me so utterly, I’m just squeamish. It probably didn’t help that the rats all had names like “Ebola”, “Typhoid” and “Literally Coated In Diseases That Are Flaking Off Onto My Forehead Right Now”.  (Maybe I made up one of these names. Maybe.) After the exciting grand finale of Cirque du Sewer, which involved slack rope walking and more theme-appropriate piccolo playing, I made my way to the Jousting and Tournament arena, where the Seattle Knights (previously seen at the Hurl Faire and the Portland Pirate Festival) staged battles and performed feats of skill on horseback. I’ve really got to hand it to those guys–I was feeling a little warm just standing around in my t-shirt and jeans, and they were battling in armor for hours. No wonder one of their members passed out during a fight! I saw her later in the day and she was, thankfully, fine…I don’t want to see anyone get hurt for the sake of my entertainment. Finally, in the distance, I spotted the notorious pickle wench, purveyor of ice cold pickles, and wearer of a really ridiculously awesome pickle mask. It was pretty refreshing…for a pickle. Sure, the salt content had me running for McGilly Sasparilly’s “Ambrosia of the Gods” cream soda, but in its first few cold pickle-y bites, I could see why my tablemate at Camlann waxed so rhapsodically about them. Plus, I will pretty much never turn down a proffered pickle. I’d probably even take one from the paws of Ebola the rat, if he felt like sharing. After that, I wandered around, catching the tail end of a performance by Broon, and setting up shop really early for Jeffrey the Jongular. Just before the show, he looked out at the audience and said he needed to go out and wrangle up more audience members. I jokingly asked him why we weren’t good enough for him, and he asked me how big my tip was going to be. First, Jeffrey, it is not polite to ask a woman about the size of her tips, and second, it made things really awkward when the only cash I had left turned out to be a fistful of quarters from the bottom of my purse. I think the tip issue is the thing that most didn’t sit right with me over the course of the day: with the sole exception of the knights, every performance I attended ended with a lengthy spiel asking for tips, some more aggressive than others, some indicating that our tips were the only thing keeping them off the street. I don’t know what the deal is with Faire, if they’re not paying their performers or what, but it seems weird to me to pay an entry fee into a place that’s offering you a day’s entertainment, only to then feel like the biggest piece of shit on Earth if you only have a few bucks to toss into their hat after partaking in said entertainment, like you’re ripping them off. I don’t typically walk around with a bunch of cash in my wallet–I happened to visit an ATM a few days prior to the Faire and had roughly $40 on me. I spent two bucks on a pickle, three bucks on a soda, and the rest of what I had on me in tips, and when that was gone, I felt like I shouldn’t go see any more shows because I was tapped out. I did go see one more show, Robin’s Risque Revels, in the adult-only theater, enjoyed all of the lowbrow jokes and songs thoroughly, and afterward I felt so guilty that I didn’t have any cash on me that I practically slunk out of the theater and suggested that we go home for the day. I’m not saying don’t go–I enjoyed the Faire, and I’ll probably go back, just that if and when I do, I will be prepared with more cash on hand so I can enjoy performances AND a giant turkey leg.