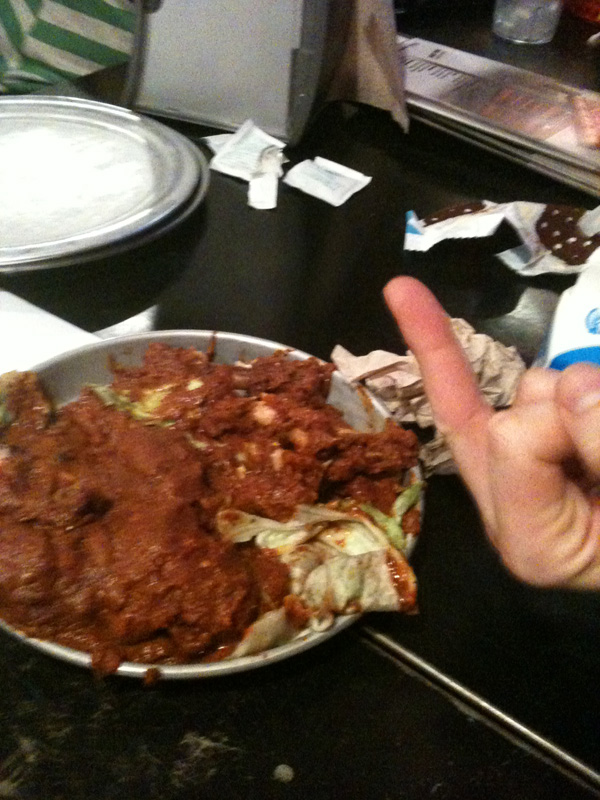 On Friday, we went to Wing Dome (which used to be a clever play on words on Seattle’s King Dome, but now that it’s gone and so are the Sonics, it’s more like a subtle way to confuse tourists and recent transplants) to celebrate Chris’ birthday. I ate my very first chicken wing, and as with most things that come with dipping sauces, I rather enjoyed it. Chris, who decided to embark on the 7 Wing Challenge, enjoyed his somewhat less. The 7 Wing Challenge is as such: eat seven of their chicken wings smothered in seven alarm sauce in under seven minutes without using any napkins or drinking any beverage. If you win, you get the wings themselves for free, a t-shirt, and your picture on the wall of fame. If you lose, you have to pay for the wings…but not as much as you’d pay the next morning if you ate all seven. The only thing allowed on the plate at the end of seven minutes are clean bones. Our waiter helpfully added that one of the challenge-takers likened the flavor of the sauce to the devil’s dick. But Chris had just tried the five alarm sauce, and he wasn’t concerned.

He started out strong, but in the end, couldn’t make it past three wings. I don’t blame him–I tried a dot of the sauce on my pinky finger and my mouth exploded in flames while my face went numb. And not only is the sauce hot, there’s an ungodly amount of it ladled over the wings, which seems unfair. If you were to order any of their other wings, there would be only enough sauce on them to coat the surface–this was a chili bowl full of sauce dumped on top. A ten-gallon hat full of sauce. This was an after picture. An AFTER–there’s so much sauce, you can’t even see that anything has been eaten or disturbed. Bad form, Wing Dome. Bad form.

Spotted on the Roadside: The Teapot Dome in Zillah, WA