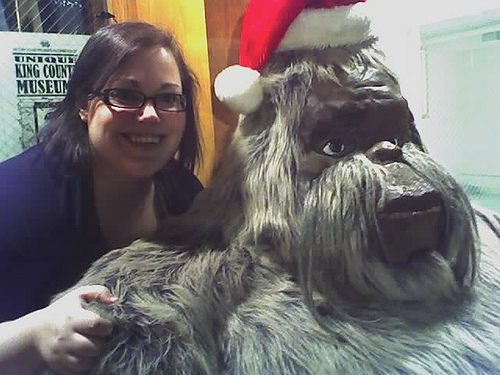 It’s no secret around these parts that I have a thing for roadside attractions. Yet for some reason, up until recently, I had neglected to check the Roadside America website for the strange and unusual in my own backyard. This is how I ended up at the Seattle Museum of the Mysteries on Saturday night. Also, how have I not been to see the troll under the Fremont bridge yet? Or to the Spite House?

It’s really a museum in the the very loosest sense. They have a few bookshelf displays–a couple on the history of the location, one on ‘Mel’s Hole’ and one on DB Cooper. The rest appears to be the results of a lifetime of collecting books on the paranormal and occult, with one lonesome plasma ball hanging out on a table.

We had arrived about 20 minutes early for that night’s lock-in, where we would be “participating in our ongoing paranormal investigation of our resident ghost, Peter Alexander Dunnovitch” by playing poker with him. But before that, we had to sit through the remainder of the ‘Ghost Hunter’s Meeting’ which registered at about an eleven out of ten, hilarity-wise. One group fervently espoused the need for psychics on the ghost-hunting team to ‘assist in pseudoscience by peering over the cliff of the known, where scientists dare not see’, while the other group indicated that no, they were scientists, and would do things scientifically. The first group countered that the second can’t rightfuly call themselves scientists if they’re not endorsed by, or members of, an official scientifc organization, to which the second group angrily retorted “Oh, so YOU can do science, but we can’t?” I was struggling between two major urges at that point: the urge to laugh maniacally, and the urge to blurt out “NONE OF YOU ARE DOING SCIENCE. I KNOW THIS BECAUSE I AM A SCIENTIST.” Another woman was also facing an internal struggle, and her struggle became quite clear to us all when she started snoring on the couch. Clearly, scientific debate doesn’t hold everyone in thrall.

After the ghost hunters cleared out, there were just three of us left–a ‘gun-toting republican ghost-hunter’, my date, and me, plus the museum employee. The museum employee (one of the psychic scientists) sat us down in front of the TV to show us a little bit about the history of the location as a prohibition bar, and afterward, she took us on a tour. As a psychic scientist, she had a lot of theories regarding just about everything. She had a theory that liquor was smuggled into the bar via the women’s club next door. She had a theory that a lot of the areas that were walled off, yet should’ve been accessible via the blueprints, were all secret passageways. She also theorized that these secret passageways have been backfilled at some point during the last 100 years. She showed us the inside of a closet, and theorized about the gap in the wall. She took us into the women’s bathroom, and theorized about a secret passageway. She talked about the exposed brick in the men’s bathroom and theorized further. So I wasn’t at all surprised when she took us through a cluttered service closet into a back alley and said “I have a theory that this is the most romantic spot in all of Seattle.” I know that when I am standing in a freezing cold, filthy alleyway blocked off by a chainlink fence topped off with razorwire, I think ‘true love’.

Next on the tour was the Harvard Exit Theater, which is supposed to be the most haunted place in Seattle, with employees reporting doors opening and closing by themselves and patrons reporting feeling someone fondling their hair, bathroom doors locking themselves, and ‘balls of leaves’ floating down the stairs. The psychic-using scientist also took a moment to theorize on why there were so many women’s organizations in one block, and what purpose they served in the community. After we went back to the museum, it was time for some ghost poker. Although I am by no means a spectacular poker player, I can hold my own, and was looking forward to playing for a while, ghost or no ghost. Had I known we were only going to play two hands, I would have bet more aggressively.

After our two hands (during which the ghost made no appearance, scientifically or otherwise), the tour guide had each of us draw a card, and said she would return in a moment. When she came back, she had us flip over our cards, and the person with the high card got to be the leader of a ghost hunt. Showing my natural inclination toward dominating others, I had drawn an ace and subsequently got busy ordering the other two around, as is my wont. The tour guide handed me a thermal video camera, I had the other two conduct a game of rock-paper-scissors to see who would use the EMF detector, and the other person became the Keymaster. This video–I can’t even begin to describe it. It was comedy gold. Our mission was to go into the women’s bathroom in the dark, do a baseline EMF scan around the room (noting that there are electical wires and whatnot around), then implore the ghosts of the women’s club to assist us in finding the secret passageway, and do another EMF scan. Afterward, we were to look in the mirror if we dared. It was clear on the video that we were all pretty uncomfortable, unbelieving, and out of our element, and the sarcasm flew fast and thick. The gun-toting-Republican-Keymaster asked the ghosts to do something to make him shit himself. We stood in front of the mirrors and chanted “bloody mary” and “candyman”, respectively. I wish to Cthulhu we’d gotten in some ‘light as a feather, stiff as a board’ and all of the other sleepover activities from my youth, but alas, we were short on whipped cream, sharpies, and a freezer in which to stuff people’s underwear. I further wish I’d been able to coerce the psychic-using-scientist to give me a copy of our footage. Since I wasn’t, here’s a picture of me and their Sasquatch. Who wants to go back on ‘Weird Science’ night?

The Seattle Museum of History and Industry
ghost

20 Comments → I was walking with a ghost