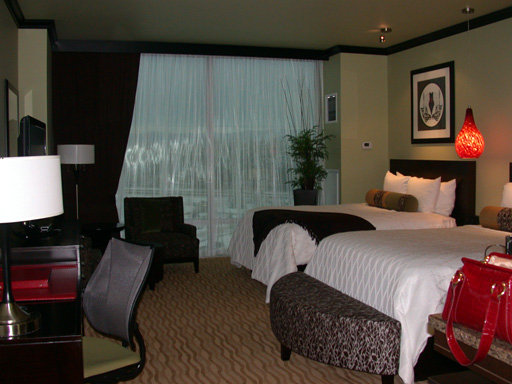 On the 20th, my coworker came to pick me up in the middle of SNOWPOCALYPSE’08 to make the trek up to Marysville for the company winter party. Our budget for next year’s party got slashed by corporate, so we decided to go out with a bang this year and live it up at the new Tulalip Resort & Spa. Most of us also elected to get rooms so we could not only stay out later, but not have to drive after inevitably drinking too much.

When I checked in, the front desk staffer apologized and said that the highest floor she could get me was the 9th floor. OH NO. Nine out of twelve was the best she could do? Remember: This is Marysville, not downtown Seattle. You’re not overlooking anything but the highway…but I suppose not being on a higher floor, we were denied the opportunity to look out over the nearby Wal-Mart.

Which is not to detract from the hotel at all, because the rooms were really very nice. The beds in particular were a whole new world of comfortable, and I fully intend to move out of my apartment and into one of their showers. You wouldn’t understand. And look: There’s the highway!

Shortly after I checked in and quit gawping around the room like a hillbilly, Carrie arrived and we began primping for the dinner portion of the evening.

Here is yet another photograph of me, but this time, in a whole new bathroom mirror. You must be thrilled. Dinner was delicious, and a sure step up from last year at Bucca Di Beppo’s (which was served ‘family style’–for 2.5k, we had to split each piece of cheesecake six ways. WHAT.). A good number of my coworkers braved the SNOWPOCALYPSE, one even driving from as far away as Portland, but enough skipped that instead of two drinks with dinner, we each had four or five. We also ended up grabbing boxes of leftovers from the buffet, and after four or five drinks, I thought it was a good idea to get one completely loaded with nothing but mashed potatoes and a couple of rolls. I think my general idea was to stay in the potato/starch family, and at one point, Carrie and I got so giggly about potatoes, everyone else in the room surely thought we were six sheets to the wind.

After dinner, we met downstairs, and headed toward the club with live entertainment. An elderly woman was sitting at the door, carding people, and when Carrie handed her her ID, the woman stared. And stared. And stared. Just when I was about to make a joke about having to sneak her underage ass into another bar, the woman handed it back and bluntly stated “I can’t allow you inside. This ID is expired.”

Sure enough, it had expired on her birthday a couple of weeks prior, but that didn’t stop us. We just went over to the OTHER lounge, the one with the guy working the door who was too busy looking at boobs to bother to check expiration dates. My boss’ boss pulled out his credit card, started a tab, and we all began drinking furiously, sprawled on comfy chairs. The odd thing was, we all kept drinking, but no one really got drunk. Sure, I would never have gotten behind the wheel of a car by the time I got to drink number nine, but at no point did I feel that I’d lost motor control. However, after a certain point, we all decided to head back to the other lounge and just waltz past whatever old lady happened to be checking IDs so we could engage in something far more entertaining than watching music videos. That something? Watching white people dance.

This guy made me laugh SO HARD. It was clear from his attitude that he’d worn his GOOD tank top to the club, the one with the guns crossed on the back, which also showed off HIS guns. It’s important to show off your guns when you’re flapping your arms about like a chicken, which is a tip this next guy should keep in mind:

After a while, even President Wonka got down on the dance floor and danced like a woman, but I’m saving that video for when it’s time to negotiate my raise. After dancing, he then snuck into the VIP section, which really had no discernable additional awesomeness besides the handwritten sign that announced the VIP status of the person within the velvet ropes.

We stuck around until last call, and then headed back toward the room–we ended up getting into the elevator with a couple of guys who noticed either (take your pick)(A)how amazingly attractive we were or (B)how amazingly drunk we were, and they started to brag about how they were alllllll the way up on the 12th floor, in the player’s room–how they had a pool table right in the room, and a golden tee, and would we like to check it out?

We followed these guys up to the player’s room, and one hell of a party was going on inside. These guys said it was a company party for ‘financial advisors’, and after a few seconds, Carrie leaned over and whispered that she really wouldn’t trust ANY of these people with her money. We drank our beer, giggled over the fact that you could see the Wal-Mart from the window, and stood in a corner and mocked most everyone in passing. A girl with an unfortunate hairdo wearing a leopard-print dress bellowed “I WANT CHAMPAGNE”. Another girl, with skin like a handbag, the world’s most jacked teeth, and whom I’m pretty sure was wearing nothing under her red velvet dress (to the dismay of all), loudly disclosed to us that the guy who invited us upstairs “didn’t think I could kick, didn’t think I could kick him (hic)IN HIS PENIS” and then ran over behind the bar and licked out the dregs of the ketel one jug. People either walked by and made a ‘who the fuck are you’ face or they bared their drunken souls to us. Either way, after a while we’d had enough of watching complete strangers make asses of themselves, went back to our room, and scooped up cold potatoes with rolls. Our new Marco Polo call is “I WANT CHAMPAGNE!” “I’M GOING TO KICK HIM IN THE PENIS!”

The next morning, we awoke, hangover-free, ate far too much bacon, ran into some people who were at the party the night before, who snorted when we inquired about what sort of financial advising they do and informed us it was a BILL COLLECTOR’S PARTY (which makes SO MUCH MORE SENSE) and won some money on the only remaining ‘Alien’ slot machines in the state (perhaps in the country!) And then, I went home and got trapped in my apartment for a solid week in the snow. Had I known I was going to be stuck at home so long, I would not have stopped drinking, and attempted a full-scale bender.