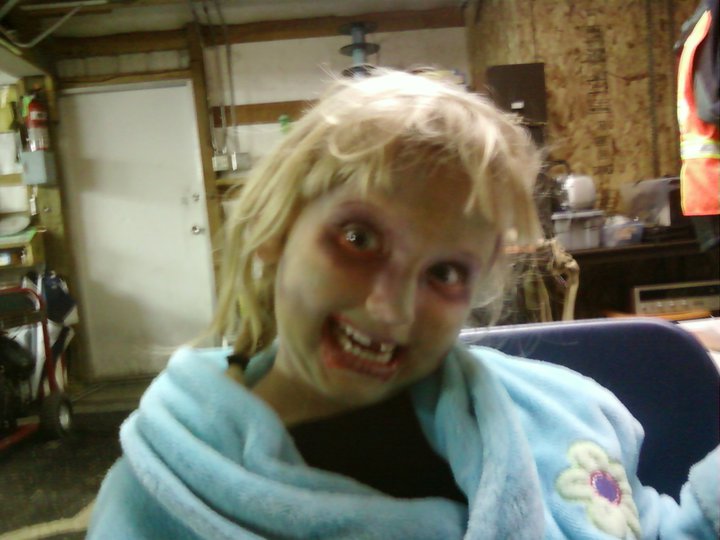 My last couple of days at the haunt went really well, though on the next to last night, a truck rolled over on Maple Valley Highway RIGHT in front of the park, took out the lighted “Haunted house here!” sign, and boned up traffic for hours, so it was a VERY light night for both volunteers and customers. I ended up sticking around until the end and shot the shit with everyone about bad movies, and the lead artist told me about some of the disasterpieces he’d worked on, and some of the ridiculous offers he’d gotten from people who expected him to work for nothing. I mentioned some of the trouble I’d had with prosthetics so far, and he remembered and brought me THE book on prosthetics to look over, saying that the only place it (and every book on the subject thus far) was lacking was information on sculpting. I suppose because it moves into the realm of the subjective instead of the technical, it’s hard to teach, because there isn’t one RIGHT way to sculpt a nose, etc, but the topic should at least be given more than a paragraph out of an entire book, because otherwise the beginner doesn’t really know how to move past lifecasting. The three of us exchanged contact info, and I definitely plan to keep in touch.

The last night might as well have been called ‘Confessional’. One teenage girl confided in me about how much she desperately liked her friend’s brother but she was afraid that he didn’t know she was alive, even though he had seen her in a short dress! One little girl sat in my chair and gravely informed me that a looong time ago, when she was really little, she used to pick her nose and then eat it, but that she doesn’t do it anymore, unless she forgets and catches herself doing it, but that hardly ever happens.

And Michael Jackson? Michael Jackson was SHAMELESS. MJ: “So, I was wondering, when a guy takes a girl out on a date, how many of them do you think want to just get up and leave when she goes to the bathroom?” Mellzah: “Hmm. I think that depends on how the date is going, and if it’s a group date, because when girls go into the bathroom together, it can be a while and I could see losing patience and wanting to go.” MJ: “Well, when I take YOU on a date, you had better not bring your friends!” Mellzah: “ONE, I don’t plan on going to jail any time soon. Two, you could NOT afford me.” MJ: “What if I get a job?…Don’t you think I’m going to be the sexiest zombie out there tonight?”

Let’s just reiterate that for a second. A twelve year old. Was hoping I’d find him sexy.

Excuse me while I go die.