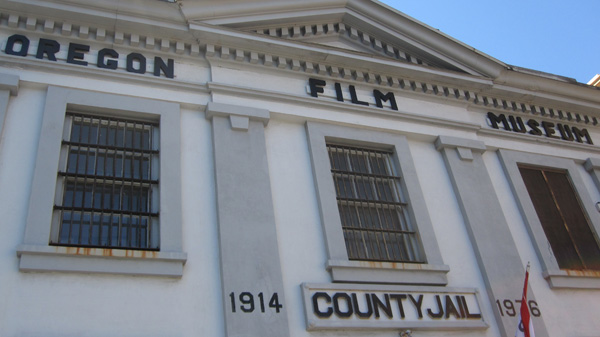 During this year’s long beach weekend, we made it a priority to visit the Goonie Museum, as we just missed it last time and had to settle for being bitten by the Goonie cat at the Goonie house. This museum is located inside the old county jail, which had been donated for this purpose by the city. Realizing that a museum dedicated to the Goonies alone might come up lacking, it recognizes many of the films that were shot in and/or featured Oregon, though it is still generally referred to as the Goonie Musuem. Tell the Goonies why you’re here: Up until this point in my life, I’d never really bothered to conceive what the inside of a jail might be like, and I’ve never had the misfortune to be forced into the experience. (Yes, once when I was in junior high, I was brought home in the back of a police car, and at one point I did attempt to visit a boyfriend who found himself incarcerated, but both of those are stories for another time, and neither resulted in me actually being inside a jail.) Still, it smelled exactly the way one might imagine a jail smells: a bit like sweat and pee and desperation. The walkways themselves were narrow and claustrophobia-inducing, and while I suppose that makes sense in terms of preventing prisoner escape, it’s less than comfortable for people visiting of their own free will. Although it has been up and running for over a year now, it suffers from exhibits that are either not ready for the general public or are broken. In the cell area of the jail, you are supposed to be able to send your friends the link to the museum’s website so they can watch you rattling around a cell, moodily resting on a bed, or yelling for chow. That was broken. In the other section of the museum, you’re given access to video cameras and sets with greenscreens, one of which was broken. You’re supposed to be able to record yourselves through the camera and edit everything together. That was broken. We had a lot of fun fooling around and photographing ourselves in flattering light, but it wasn’t everything it could have been. But like I said, we still fooled around. Everyone’s natural ham came out in front of the camera, and we’ve taken this as a sign that we should own video equipment of our own while simultaneously knowing no good would come of it. It’s like going to a pet store and falling in love with a nervous tinkling dog named Stainmaster 2000. You love his cute face, but can you change his nature? Probably not. After a while, we noticed a face-size hole cut into a door, which I assumed was there for me to recreate a scene from The Shining. I have no idea why it was actually there, though I suppose it could well be there for this purpose as the front exterior of the building was filmed in Oregon. While having my Shining moment, I realized that fortuitously I was wearing my ET/Shining shirt mash-up and I had the opportunity to take an extra creepy photograph, if only I was willing to cram my boobs through a hole in the wall. As always, I was up for it. At least, it was creepy until this happened. After we’d done all of the fooling around in the museum that we could muster, we made our way to the gift shop and realized that each of the cameras they’d given the public to play with feed directly to a monitor on the gift shop screen. At least three faces turned beet red, and there were some strong mutterings of “Thank god we didn’t get our tits out”. There should be a warning! It’s not like we’re all of a sudden going to learn decorum on our own!