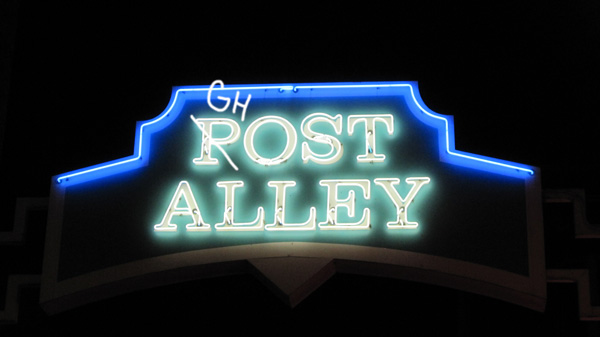 To celebrate my friend Aisling’s birthday, we went on the Market Ghost Tour. The Pike Place Market has supposedly been voted the most haunted place in the Pacific Northwest, which seems somewhat convenient given that it’s a tourist destination, but I suppose that’s the way these things go. Almira could have Satan popping out of the ground on Main Street every fifteen minutes, and the people around here would hem and haw and conclude that if it isn’t within a fifteen minute drive of home, it isn’t worth seeing. This was a ghost tour, unlike the Museum of the Mysteries’ ghost hunt, so there was no yelling at ghosts or recording EVP or running down dark hallways in an attempt to catch paranormal activity on a thermal camera. Instead, it focused on telling ghost stories located in the general area. And even then, it was a lot more general history than spooky stories involving encounters with the dead. For instance, we were told about Dr. Linda Hazzard, a doctor who treated her patients by starving them to death. It was intimated that she practiced in or near the Pike Place Market, when a cursory internet search indicates that she did all of her practicing stateside in Olalla, Washington. Also, the story involved zero ghosts. In another story, we were told about a “fat lady barber” who used to steal from traveling sailors, but whose “fat caught up to her, she had a heart attack, and broke through the floor on account of being so fat.” Except we were told immediately afterward that wasn’t the case, they’d combined two stories into one–the “fat lady barber” was murdered by one of the sailors she’d stolen from, and another person had fallen and broken through the floor. We were told these stories were combined in order to have a better morality tale, so people will “eat their veg” and not steal. It’s really good of them to have done that; I don’t know if I could have made it a full seventy-five minutes without some form of fat-shaming. And really, who is going to believe that a fat lady died from her stab wounds? Please, like a knife could have even penetrated through all that fat. She was clearly double-teamed, but ultimately taken out by obesity: the silent killer. Once again, it’s good this story had a moral, because that made up for the lack of ghosts. There were stories about posing for pictures with dead relatives–no ghosts. A story about a raunchy old lady who used to hang out at the Pike Place Market–no ghosts. A tree blossomed after someone was buried at its roots–no ghosts. Hey, look at that tile on the market floor bought by the Heaven’s Gate Cult!–no ghosts. Even when the stories did involve ghosts, they were nigh-universally lackluster. “There was ghost activity in the theater, but it stopped.” “There was a ghost haunting this building, but someone put cake on his grave and he stopped.” Even when the story should have had a little more punch, the guide rushed to the finish line and didn’t give any time for anything to register, hustling us to the next story area. “And the little boy had no eyes–and we’re walking, we’re walking!” It’s not that I had a BAD time, I just expected a bit more. Maybe more ghost stories and fewer made up morality tales. After all, once someone has admitted to telling you a lie, how can you believe any of the other preposterous things they put forward as the truth? Ultimately, I think I could have had a ghostlier experience if I’d taken the $17 for my ticket and spent it on whiskey. Why’d they build this ghost town so far away?

The Seattle Museum of History and Industry
ghost

6 Comments → “I keep telling you, ghost sex is nothing! It’s worse than nothing!” “Then why were you moaning last time?”