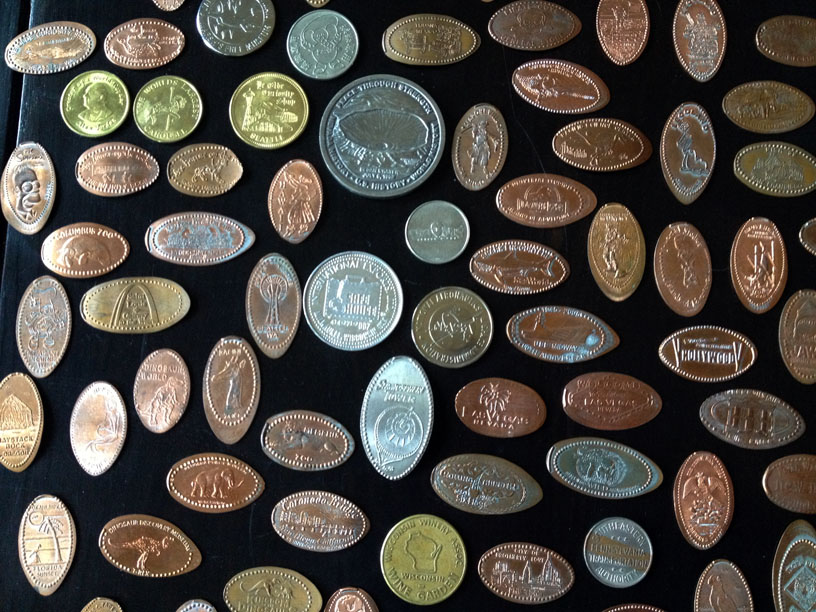 I have been collecting pressed pennies for as long as I can remember. Literally any time there is an opportunity for a coin-based souvenir, I have either gotten it myself or wrested it out of the hands of someone else.  They all hang out in a bowl in the house, and like a great big weirdo, I scoop them up in my hands and let them jingle through my fingers. I would swim in them, Scrooge McDuck style, if it was possible.

The day we went to the Kennedy Space Center, there were two separate coin-based souvenir opportunities: one pressed penny, and one silver coin with the NASA logo. I needed both, and stripped the necessary change to acquire them out of Jason’s pockets. This ended up costing me significantly more than the value of the coin.

Unlike Washington State, where there are only a few toll roads and they’re mostly avoidable, Florida has tolls everywhere. It seems like there’s a tollbooth every twenty feet on the highway, and as people who rarely carry cash, we were completely unprepared. Luckily, we had some cash on hand when we arrived at the airport, and the booths we went to were staffed with people who could give us change. Unfortunately, on our way back from the Kennedy Space Center, our GPS lagged at a critical juncture, and I ended up merging from one highway to another going in the opposite direction of the one we wanted to travel. Normally, this isn’t a problem; you just drive to the next exit, turn around, and merge on in the opposite direction. In Florida, this was a problem, because on this particular highway, the exits (and entrances!) were tolled, too. Umanned tolls, accepting only change.

Change that I had used in the acquisition of pressed pennies.

Then it was a matter of driving around and finding a business that would give us change so we could merge back on to the highway in the correct direction, which took longer than you might think.

Before we went back to Florida, I stopped at a bank and picked up an entire roll of quarters. This time, the toll roads wouldn’t accept cash, period, only a sunpass, which of course, being tourists in a rental car, we didn’t have. Seriously, Florida? In order to get to our destination in South Beach, we ended up having to take a pass only toll road, so I’m not sure exactly how they deal with violators, but as a repeat offender, they probably have a warrant out for The Tollway Terror. We’re the most infamous duo since Bonnie and Clyde.

Why’d they build this ghost town so far away?