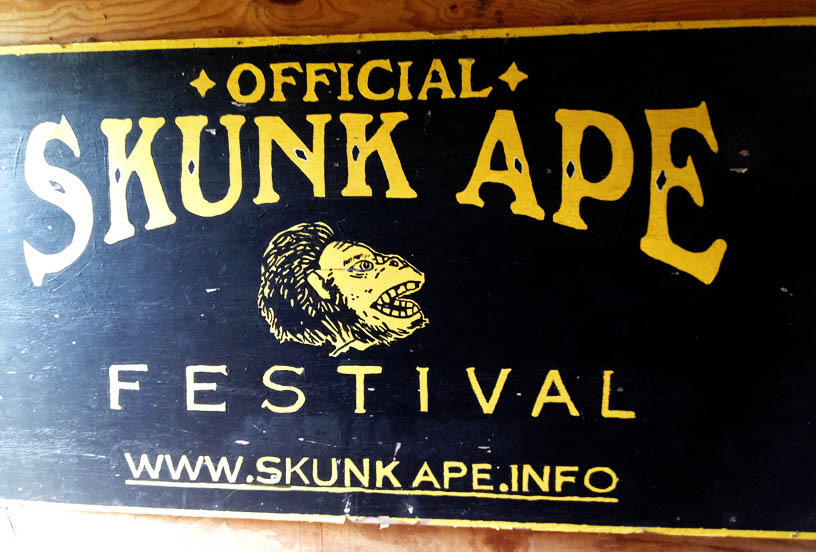 One of our must-sees in Florida was the Skunk Ape Research Headquarters, so, you know, another intellectual venture for us.  Based on the myriad quotes on their website,  such as “I’m an American. I should be a shining example of how great this country is. But instead, the Parks Service has built all of these campgrounds around me. Their employees direct customers away from me.”  [The rest of this quote is found on the Roadside America report: “…one of their employees has attempted to buy illegal weapons in Miami to kill me. And they won’t even fire the guy.”] generally make the owner sound unhinged in a fashion that made the prospect of visiting particularly enticing. Having never been to the Everglades before, I expected the Skunk Ape Research Headquarters to be decrepit shack at the end of a winding dirt road hours from civilization, the air thick with humidity and the strains of banjo music from an unseen player, the sort of place that would make you feel like you’ve stepped out of your car and into a horror film.

This is what we got instead: I mean, it’s sort of decrepit in a touristy way but it’s off of a paved main road and there’s still cell signal, so your only legitimate source of danger are the mosquito swarms and the myriad diseases they can transmit. Inside the corrugated metal storage container, there was a large gorilla statue, some skunk ape tchotchkes to purchase, and the same generic tourist crap you can buy from literally anywhere in Florida. Shoved into one corner was the Skunk Ape “evidence”, which consisted of one foot cast (which was covered up with hats you can purchase), a few photographs, and a broken television.  There wasn’t even anyone in the shop to answer questions, not even the, uh, eccentric owner, just a guy who was browsing the internet and clearly pissed we’d interrupted him. It’s not that a couple of photoshopped pictures of a dude in a suit isn’t exciting, I just expected a little bit more enthusiasm for their supposed obsession. Perhaps a little more scientific rigor, something to tide over the public’s thirst for truth while visiting on weekends that aren’t on the Miss Skunk Ape Pageant. Or if you’re going to the trouble to falsify a cast, why not go a step further and fake up a fur tuft or a skull? Because right now, I’ve got about as much evidence of unicorns in my house (a non research center) as they had of skunk apes in their research facility. Plus, not to boast, I have two working televisions. In the back, they have a small animal exhibit, and I suppose the Skunk Ape stuff is just a way to lure people in and away from any of the other animal exhibits we’d seen on our way; paying for it just so we’d feel we didn’t waste the trip. Apparently I’m one to reward that sort of sheisty behavior, because pay and go back we did. They clearly specify that the back area is “at your own risk”, and they mean it, letting you hold a baby alligator and even offering to let it bite you. The man in the back was much friendlier than the one up front, seemed knowledgeable about the animals, and generally allowed you to poke and prod things at your own risk. Mostly, we neither poked nor prodded because if anyone was to be bitten by something that could shear bone, it’d be me. They had a number of snakes, a few snapping turtles, a large nonthreatening turtle, and a large alligator out back, but I was unexpectedly charmed by the birds. The parrot greeted me and would follow me around as I walked around his cage (though he’d always make sure to say “hello” when I wasn’t recording video.) This umbrella cockatoo in the cage I was told “loves attention but has poor impulse control, so he would also love to bite you. But you can pet him if you can get him to turn around.” I did actually risk stroking his feathers with one finger on my non-dominant hand. I’m not sure he got much out of it, but I felt immeasurably brave.

There was a second cockatoo who loved people more and apparently managed to quell his bitey impulses, because he would sit on anyone who would let him, raising one little leg in the air when he’d had enough and was ready to move on to the next person. Sometimes he would hang out on one person for a long time, and sometimes his leg would pop up almost the second he perched on someone; all we could do was respect the leg. Overall, maybe things are a bit livelier around the Skunk Ape Research Headquarters during the Skunk Ape Festival, but otherwise I can’t recommend a visit until they get their act together. It could be a truly ace roadside attraction with a better mini museum about the history of the skunk ape and the owner’s efforts to see and capture one, and they could kick it up another notch by getting rid of the sad everyday Florida tourist crap merch and sell skunk ape plushes, cast replicas, official licensed Skunk Ape hunting gear,  and for god’s sake, get a pressed penny machine in there. Either way, they need more than their sad neglected corner o’ crap to make it worth the trip. I’m not going to lie, I also hoped that we might catch a baby skunk ape that looked like a wee Chewbacca who could ride the dog around, but unless he has amazing powers of camouflage and elected to climb in our rental car of his own free will, that one didn’t happen either. That might be the biggest disappointment of all. I was going to name him Carl Skunkbutt, make him tiny outfits, and freak out everyone at the dog park. Why don’t my dreams ever come true?