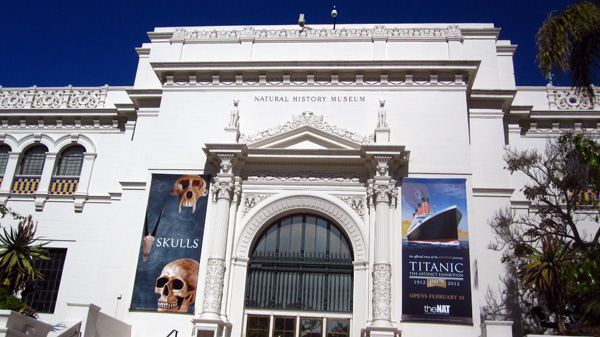 On our second day in San Diego, Jason and I visited the Natural History Museum in Balboa Park, arriving in time to see the Skulls exhibit but thankfully missing the Titanic exhibit–the fewer times I’m reminded of the three hours of my life I wasted watching a movie about a selfish woman who tells rambling stories about banging in jalopies, getting drunk, and showing her boobs to people, who then throws her legacy into the ocean, the better.

First, Jason made friends with a dinosaur. Next, we saw a display of a velociraptor being torn apart by hungry rats. I have problems dealing with the idea of the flamboyant assassin of the dinosaurs being eaten by small mammals, yes, but I have even more of a problem dealing with the fact that Liberacesaur is being devoured by animals with such derpy looks sculpted onto their faces. Particularly that guy on the left. I don’t even remember what this animal is, but riding it was far more important than learning anything. Then, Jason made friends with a manatee. Upstairs was the exhibit about skulls. Surrounding the area was a blackboard that people were encouraged to draw on–I honestly don’t know how they thought any good could come of this. I’m shocked that we had the self control not to draw wangs all over everything. In the skulls exhibit, I learned that rhino poachers are extra super huge douchebags as the “horns” they kill the animal for are just lumps of keratin (hair and nail protein). Good job, guys, maybe next time you can make your magic potions when you clip your toenails instead of making all the world’s rhinos extinct. Your compass is broken. Also upstairs, they had a tank filled with animal bones that were being cleaned by their “helpers”, flesh-eating beetles. It smelled about like what you might expect a warm tank of bugs munching on fetid tissue might smell like. After we were done checking out the skulls, it was time to go downstairs to watch a 3D movie. We’d carefully considered our options and decided to go with “Sea-Rex, the T-Rex of the seas” because we felt like it would deliver on all levels, but especially on the blood and gore level (but always with an eye toward science, mind). What we got was a 3D movie about a creepy late middle age time traveling guy hitting on a young teenage girl. I am shocked that none of his “Let me show you” statements ended with “my penis”. Also, what’s with this “T-Rex of the seas” bullshit? Is this the only way they could get people interested? I watched an entire film about it and I barely remember that the actual name of the creature is the Mosasaur because it was blocked out by the phrase “T-Rex of the sea”. Granted, I could have just been crabby while watching said film as I was hungry and there was no concessions stand available to sell me the “T-Rex of hot dogs” or the “Ankylosaur of sour patch kids”. There was also no blood or gore. Disappointing on all levels–but if you don’t believe me, now you can own it on blu-ray! We were very nearly running out of time but decided to be a little late to our next engagement so we could see the minerals exhibit. “Formed by unimaginable heat and pressure deep inside the earth, minerals explode in a vast pa–ugh.” This bra made of precious gems and metals makes my bras seem both comfortable and affordable by comparison. It bears mentioning that this is the only section of the museum that contained armed guards, but we were still allowed to touch many things–and everything we could touch, we DID touch. I was especially keen to lay my hands on a meteorite as I like the idea of handling something that was hurtling through space (No, I do not have an astronaut fetish). Since we visited San Diego, Jason purchased a small meteorite and I go handle it almost compulsively. I’m sure I’d be typing with it in my lap right now if it didn’t weigh so damn much. This piece is called “Neptune’s Daughters”. I think it’s time to call CPS.