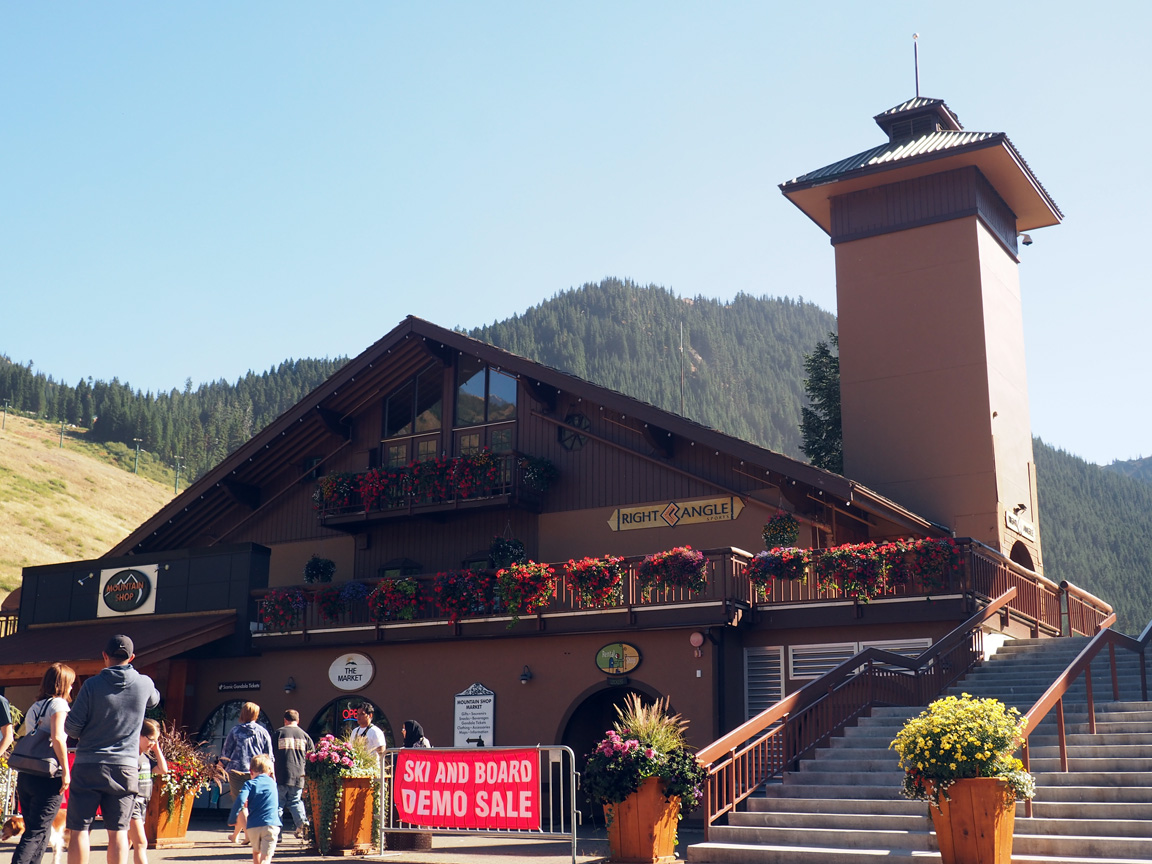 Our one year anniversary fell on a gorgeous day, so we decided to make the most of it and drive to Crystal Mountain and take their gondolas up to the summit for what they call the best view of Mount Rainier. We’ve been having a lot of problems with teens (and young adults) dealing and doing drugs and partying in the lot area behind our house–over the summer, I’d been telling everyone I saw back there that they needed to go somewhere else, and the reaction has been about what you’d expect: a couple of apologies, a few “old nosy bitch” remarks and that’s been that. But our neighbor has also been telling people they can’t be back there any longer, going a step further and telling them that if he saw them again, he’d take their pictures and call the police, and things have started to escalate. Our house has been egged. A package was taken from our doorstep, ripped open, the contents mutilated and scattered through our front and back yards, in broad daylight. The very next day, the day before our anniversary, someone started a fire behind the neighbor’s house, also in broad daylight. So when we left for our daytrip, we were both more than a little anxious that something would happen while we were gone, and we both began pointing out houses for sale further and further in the boonies (“A two hour commute each way isn’t so bad, is it? Plus we could have horses! I find the scent of manure really quite invigorating.”) Thankfully, nothing happened that day and with any luck, this entire thing will blow over. There are some killer houses for sale with amazing views out there, though, if we can ever figure out a way around the commute issue. Is this the fabled double-decker outhouse?! When we bought our tickets for the gondola ride, the ticket-seller asked if we planned on eating at the restaurant at the top of the mountain, The Summit House. When we replied in the affirmative, she said that since we didn’t have reservations, it’s unlikely that we’d be able to eat there, and if they could fit us in their schedule, it would be a two to three hour wait, but we were welcome to buy snacks in their gift shop and take them up to the top with us. We took one look at their dusty Cheetos and decided we’d take our chances on the top of the mountain. I don’t know where the two to three hour figure came from, but The Summit House was able to seat us immediately on their patio, at what I would consider the best seat in the house. When you have such gorgeous views all around you, why would you want to sit indoors? The food there is expensive, which has everything to do with the location and the view and not the quality. Which isn’t to say it’s bad: just overpriced. My watermelon salad was refreshing and delicious, Jason enjoyed whatever the hell it was that he ordered, and the only regret came in the $10 mixed drink we both ordered: their “house squeezed lemonade with vodka”. On a sunny late summer day on a patio, how could that fail to be amazing? I’ll tell you: when the “lemonade” turns out to be two shreds of lemon flesh in a glass of water. I would swear on my life there was no vodka in that glass. Just water with a hint of lemon. It tasted like disappointment in a plastic cup. What a cheeky little bugger! Pinkies out, though. They’re not total animals.

When we tired of having chipmunks crawl all over us like adorable rabies vectors, we proceeded back down the mountain. If the gondolas had been open past sundown, I definitely would have stayed to see the sunset. Instead, I’ll see if I can catch it on their webcam.