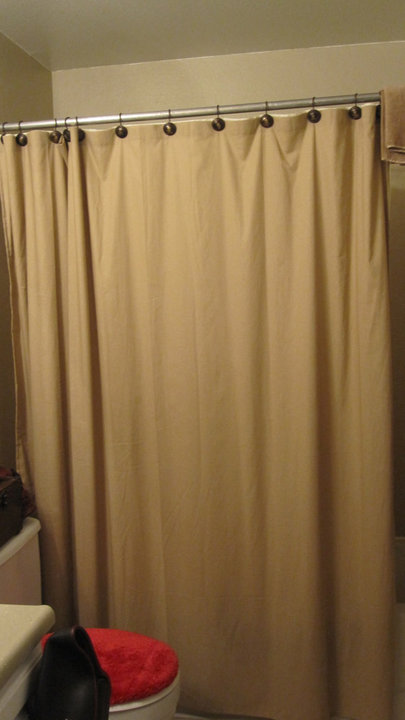 On Saturday, I was stood up for a date by my supposed boyfriend. I waited and waited and waited for him to show up at my place, and he wouldn’t have ever even bothered to let me know he wasn’t coming. The only way I found out that he’d ditched me to have dinner with some other chick was because they both posted pictures of THEIR get together on the internet (GEE, IT’S NOT LIKE I EVER CHECK THE INTERNET OR ANYTHING), and full of rage and booze, I ended up painting my shower curtain, which I’d intended to do for some time, anyway. It’s pirate-y and pleases me enough so that I don’t feel like I have to shake someone down in the street for the money to buy this insanely overpriced shower curtain. At least, for a while.

I actually haven’t posted any pictures of the pirate bathroom since I moved into this place a year ago, it’s quite different from the last place as I have MUCH less counter space here. So, here’s a quick photo-tour. Eventually I intend to have changeable phrases for the poster so that guests can switch things up as they like–I’ll get around to it at some point.

Makin Stuff: Save the FLDSMDFR