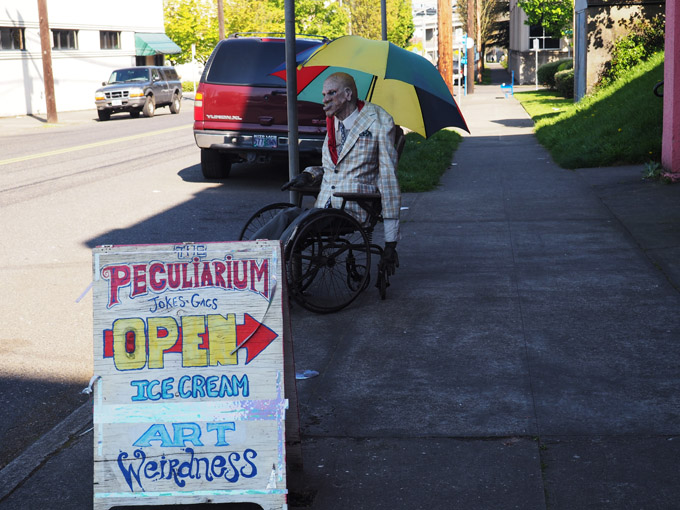 So many of Portland’s weird, iconic monuments to peculiarity have closed shop, moved, or disappeared. The 24 Church of Elvis closed for good in March 2013 after 30 years in four different locations. The Velveteria Museum of Velvet Paintings has packed up and moved to Los Angeles. The Faux Museum closed in January of this year. The Portland Alien Museum has closed to the public, ostensibly to deal with a predicted universal extinction event in 2016. The World Famous Woodstock Mystery Hole has stopped giving tours. That’s what makes it extra delightful that the Freakybuttrue Peculiarium has wholly embraced the slogan to “Keep Portland weird”, with their blend of outsider art, interactive displays, curios, and a good old-fashioned eating challenge: ice cream with a healthy sprinkling of insect larvae.

I loved the Peculiarium. LOVED IT. From its alien autopsy room to its videotaped lecture on the diseased zombie brain to its busty John Waters to its snarky signs to its absolutely amazing creepy dollhouse, the Peculiarium was everything I hoped it would be and more. I came, I saw, I bought their coloring book, I played with their theremin, and I thought long and hard about their Insect Eater’s Delight packed into a “Cone de Lisa” (aka a waffle cone with milk chocolate and a rice krispy treat inside decked out with sprinkles) but ultimately determined that I just wasn’t ready to eat real insects when just the suggestion of one once made me throw up. Also, I had a lot of doughnuts in there already. So maybe next time! I hope there’s a next time. Portland just wouldn’t be as weird without the Peculiarium.

1 Comment → How Very Odd: The FreakyButTrue Peculiarium in Portland, OR