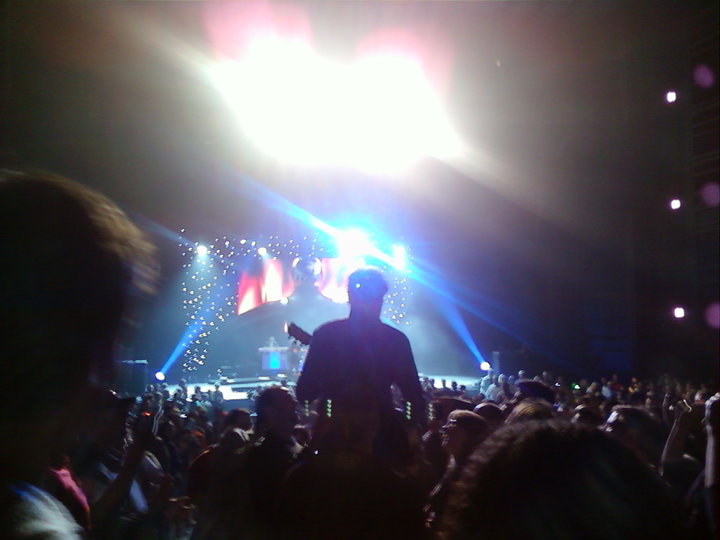 Last night, I went to see Conan O’Brien’s “Legally Prohibited From Being Funny On Television” tour at McCaw Hall with Tristan. I wasn’t entirely sure what sort of show I was in for, given the opening act Reggie Watts and his utter lack of anything even slightly resembling humor. From Wikipedia: His shows are mostly improvised and consist of stream of consciousness standup in various shifting personas, mixed with loop pedal-based a cappella compositions. Aka: Wesley Willis Lite, except it’s affectated mental illness, ala Amanda Palmer and her latest ploy for attention, Evelyn Evelyn, and what have we learned about playing false disability for effect? It’s tacky, offensive, and it sucks.

Conan was a welcome funny counterpoint, being introduced onstage by a video showcasing his life after The Tonight Show–overweight with a beard ala ZZ Top, hovering over the phone waiting for a potential job to call, stuffing his face, laying in abject grief on a trampoline, and smearing peanut butter on his toes to encourage the dog to come over. After the video was over, Conan took the stage, and explained the eight stages of grief he went through after losing the show, only ever referred to as ‘the incident you may have heard about’, most notably anger–anger that people like Kim Kardashian, The Ace of Cakes, Snookie, and Criss Angel still have TV shows and he does not. Also notable: the ‘blame everyone else around me’ stage, and ‘buy everything that Amazon thinks I would also like’ stage, though in my opinion, it could have used a ninth stage, the ‘hunt network executives for sport’ stage.

He also spoke warmly of Seattle, referring to it as his home away from home since he swept in like a Viking and stole one of our women, marrying her clad in gore-tex and fleece at St. James Cathedral.

Some old favorites were brought out, changed slightly given that they may now be the intellectual property of NBC–Masturbating Bear turned into Self-Pleasuring Panda (“Endangered–and now we know why!”), Triumph the Insult Comic Dog went unintroduced, and the Walker Texas Ranger Lever was the Chuck Norris Rural Policeman Handle.

Some of Conan’s musical numbers really fell flat, but were saved by Meatloaf’s giant inflatable bat from the ‘Bat Out Of Hell’ tour, Andy Richter’s clever radio-style commercials for local establishments Dicks and the Fremont Troll, and brilliant Tonight Show writer Deon Cole. Oh, and one special guest, you might have heard of him, maybe, even though he’s a local guy–Eddie Vedder. Eddie freaking Vedder. He came onstage with a mandolin and sang a sweet version of “Rise Up”, then switched the mandolin out for a ukelele, cracking that tiny instruments make him appear larger, though Conan the giant shatters that illusion. He then sang what he referred to as his birthday card for Conan, and asked everyone to sing along as it would be “like signing the card”. The song? “Oh Yoko”, with ‘Coco’ substituted for ‘Yoko’. Then Mike McCready came out and he, Eddie, and the Legally Prohibited Band played a thunderous, powerful version of “Baba O’Riley”, Eddie flinging tambourines into the audience, getting them replenished from backstage, and flinging more out. It was AMAZING.

To close, Conan played his version of “I will survive” and “40 days”, ran out into the audience with his guitar, and kept playing standing up on a seat about three rows in front of us. I could have reached out and touched him if the act wouldn’t have been creepy even for me. All in all, a good show and worth paying to see the man that NBC paid to go away.