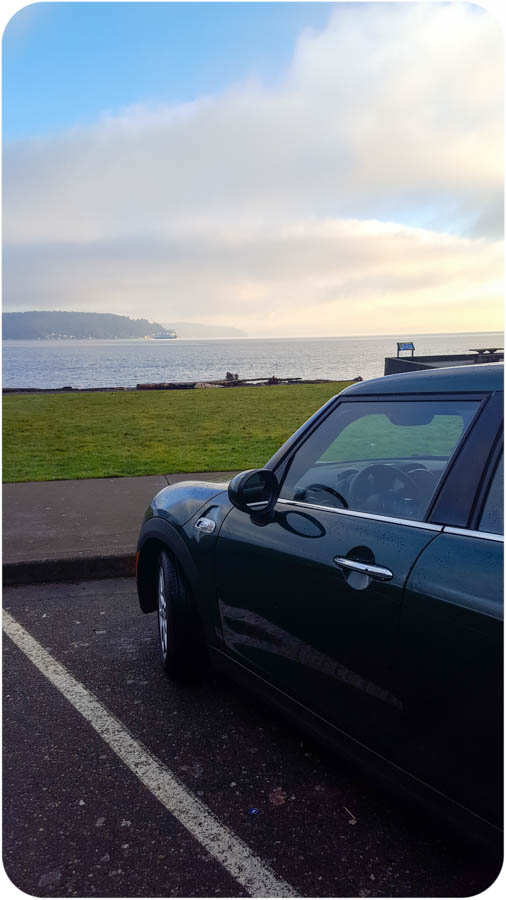 This December, we bought Jason a new (used) car, because you could hear his old junktrap Saturn squealing down the street from a block away, its bumper held on with a bit of string, the oil puddle in the garage growing into a horrible pond. It was ridiculous, and we were both determined to get him into something that was less likely to heave a sigh and collapse in the middle of the freeway. Ultimately, we bought a Mini Cooper. It had some flaws in the chrome pieces surrounding the headlight and taillight, and since it was certified and the trim should have been pristine, they gave us a thirty day IOU to replace them.

When replacement day rolled around, they gave me a new Mini to tool around in until the work was done, and since it was a gorgeous day, I decided to go to Point Defiance Park and walk around. I parked near Owen beach and climbed the staircase back up to five mile loop road, backtracking to the rhododendron garden. I started wandering the trails and found myself on this absolutely magical moss pathway: How is it even possible that this didn’t lead to a witches’ hut?

While the branches here don’t sigh as heavily with mosses as the ones at the Olympic National Rainforest, it’s a close thing. Even in the winter, with dead leaves carpeting the ground, this place is verdant and full of life. Very few other people, however, so I almost shrieked a couple of times when someone I had been unaware of suddenly passed me by because I had been looking too intently at my camera and too deep in podcast land to sense their presence. I might as well wear a sign on my back that says “Murder me“. What a neat mushroom! Speaking of getting murdered out in the woods somewhere, I misinterpreted the map and ended up getting a little lost. Not, like, “oh shit I need some survival skills alone out in the wilderness for 72 hours” kind of lost but more like “this road keeps splitting and somehow every fork is marked with the fort going one way and the zoo going another but I never arrive at either”. If I only had access to those signs, it could have turned into the former kind of lost situation, but thankfully T-Mobile’s coverage has improved since I switched to them and I was able to use GPS to figure out that I was nowhere near where I thought I was. Once I had that information, I was able to orient myself back on the path toward Owen beach, and took myself out for a celebratory “I didn’t get myself killed out in the woods” lunch at Duke’s Chowder House. This wild salmon with goat cheese and blueberries was so good, and while I’m still iffy about mixing cheese and seafood (probably from hearing it my whole life and not because I’ve had a particularly heinous cheese seafood experience), the tangy goat cheese paired beautifully with the flaky, rich salmon, the balsamic blueberries a burst of earthy summer on a cold winter’s day. A window seat with a beautiful view of the sound was the cherry on top. I can’t believe how long I’ve lived in this area and had never been to this park before. I’ll have to make it a point to go back during the other seasons to see how it changes–maybe I can twist Mini’s arm into giving me a loaner for oil changes.

The Topiary Park in Columbus, OH