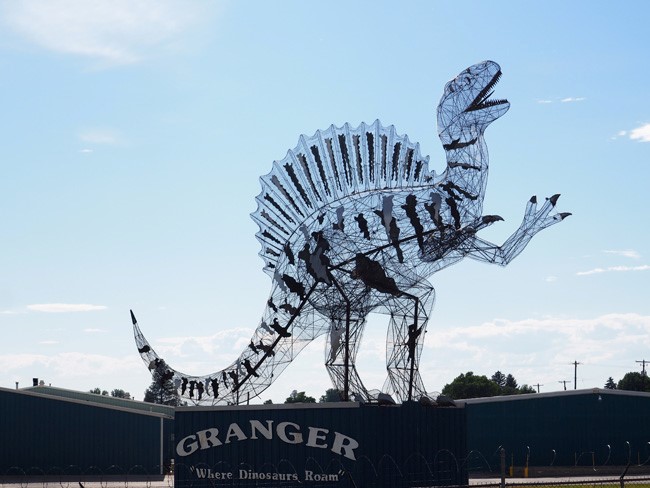 Only one dinosaur bone has ever been found in the state of Washington (an unidentified theropod in the San Juan islands), but that didn’t stop the small town of Granger from conspiring to capitalize on Jurassic Park mania in 1993. In 1994, the first dinosaur statue was produced, and their collection has grown by leaps and bounds since, with around thirty concrete dinosaurs scattered around the town. Driving around to see them is like being on a much safer, easier-to-spot safari. There’s also significantly less chance of a mauling, though it came close when I was repeatedly heckled by some little bastard children out a car window because I dared to climb on and ride a baby brontosaurus like god and nature intended, losing a shoe in the attempt. “Boo! Boo! You suck!” over and over and over. It might not be strictly polite to dropkick someone else’s child, but I think the rules of society occasionally allow for it. After all, it takes a village. I made do with “I can see you, you little shits!” and they piped down. Score one for profanity and vague threats.

There was also a slight risk of mauling by dinosaur descendants. I visited at the peak of nesting season, and several species of birds made it clear that we were not welcome in the area. None so clear as the goose that hissed and charged at Jason while his back was turned. I warned him in time which I feel makes up for my failure during The Pony Incident™ of ’14.

Although a few of Granger’s dinosaurs have “battle damage”, most of them have sweet and goofy expressions, not unlike the dinosaurs of Dinosaur World. Unlike Dinosaur World, the dinosaurs of Granger are a little worse for wear, but they are free to gander at, ride, and generally make an ass of oneself in public. It’s also evidently a prime public makeout spot, even at high noon on a Sunday, and I have some spectacular photos of people grinding intently on each other’s laps that I took by complete accident. Whoooops. Take that action into the privacy of the volcano toilets, people.

I believe that Dinosaur World is the only place where a boy like me can be happy.