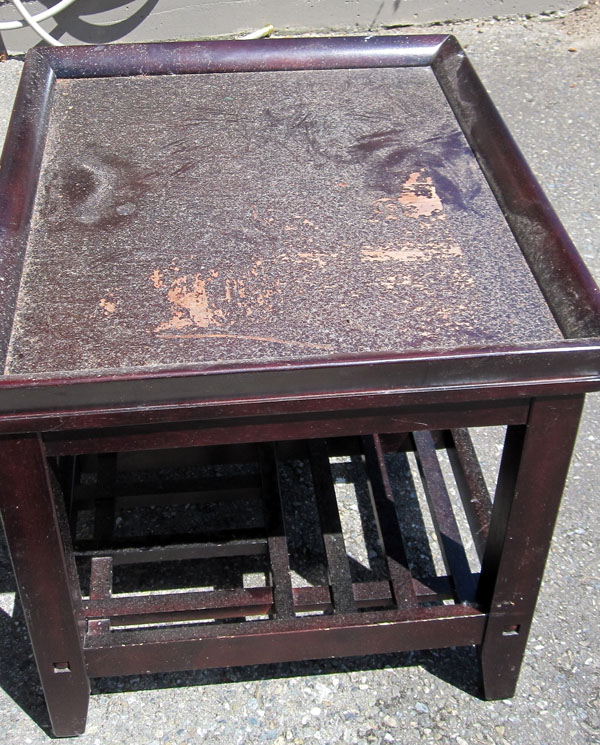 The friend who gave me the now orange chairs also gave me a table to makeover. The table was overall in decent shape, save for the top, which was flaking and peeling like a sunburn. I decided I didn’t want to refinish the entire thing, just the top, and I was just recently inspired by a completely glittered concrete floor, so I decided to glitter this tabletop in a similar fashion. After sanding it down, taping it, and laying down the base coat, the first lesson I learned is that glitter doesn’t stick well to spraypaint. Even wet spraypaint. The second lesson I learned is that if you’re going to get large amounts of glitter to stick where it doesn’t want to stick via spray lacquer, you must first mist the glitter from above with several light coats, as if you spray too directly, the glitter will ball up and roll across the table in chunks. The third lesson, I already knew: glitter eats topcoat, so in order to have a non-bumpy, reflective top, instead of gritty, dull glitter, you have got to coat and recoat and recoat with lacquer. I determined that doing this via spraycan would take a year and a day, so I busted out the big guns: polyurethane in a can, and I still needed three thick coats before the surface was smooth and reflective, with each coat taking approximately 24 hours to cure as apparently it dries very differently on glitter than on wood–lesson four.

Lesson five: if the paint on the top was flaking, the other paint probably isn’t all that stable, either, and the tape you placed to protect it from red spraypaint and glitter will likely pull it straight off. @(#& Nothing a little more spraypaint can’t fix! The photo doesn’t even begin to capture its glittery majesty. It’s primarily red sparkle but in direct sunlight, it flashes gold and purple. It’s going to live in my crafts room, dubbed Mellzah’s Sparklepalace of Glitter and Gore, and there it will serve as a stand for the monitor/xbox Jason got me for the room, as he knows how important it is to me to have movies/tv shows running in the background when I’m working on a project; it helps me to stay focused on the task at hand instead of wandering away after five minutes.