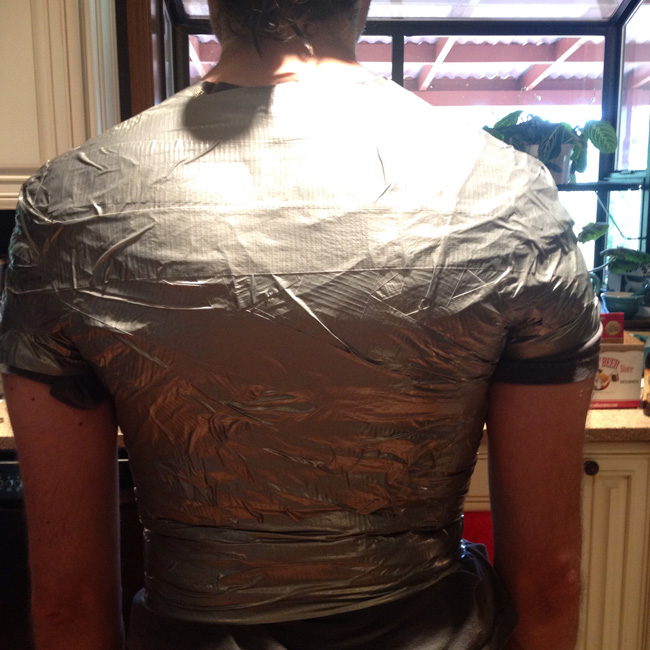 I’m writing this in the past at a crossroads: either I went on vacation this week or I got mashed by a tree in STORMPOCALYPSE 2016. Or, I guess, I didn’t go and I didn’t get mashed but the power was out for a damn long while and updating my blog wasn’t my first priority. Regardless, I didn’t work on shit this week to reach my Halloween goals. So here’s a look at the costumes I built for last year. That’s right, last year. I’m nothing if not timely.

I’d had a bug up my butt for a while to make Jason a Thorin Oakenshield costume. I made his ring way the fuck back in November 2013, and then I hit a patch of severe depression and didn’t do anything for Halloween 2014. I’d had my traditional pumpkin carving party, but as far as a costume goes, I didn’t do shit. I stayed at home, handed out candy, and depressed myself further because it was my favorite holiday and I wasn’t doing anything. So I started working on his costume in earnest at some point during early 2015. First, I made a duct tape husband. This allowed me to fit a costume to him without him needing to be present and with a slightly lower risk of sticking him with pins. I also turned these santa boots: into these Thorin boots: I cut off the faux fur top, covered them in brown fur, and made boot caps and straps from fun foam. I don’t know why I had never really used cosplay resources before to figure out how to make stuff, but it turns out there’s a whole community of people who know what they’re talking about when it comes to making costumes and props, and they’re willing to share this information with people like me. Hurrah! It turns out this fun foam stuff that I’d seen a million times at craft stores and wondered what anyone would use it for is actually a miracle substance that I may end up using for everything. It’s pliable, you can heat mold it and it will hold its shape, and if you seal it with glue and paint it with metallic paint, it can resemble metal armor. It’s pretty astounding! Cosplayers are also all about thermoplastics like Worbla, which would have also worked for this application but it’s significantly more expensive, so I haven’t dipped my toes into that pool yet. I also used fun foam to make Thorin’s bracers, shown below before they were sealed and finished: I also learned to do resin casting, which has turned out to be another useful tool in my arsenal. I needed to learn for this costume because Thorin wears a suit of brigandine armor under his cloak, and it’s one of the most visually striking aspects of his costume, so it’s not something I could skip out on. First I made a master in apoxie sculpt. I then made a silicone mold of the master, and then dusted that mold with aluminum powder, poured in resin with more aluminum powder mixed in, waited for it to cure, rubbed the new resin part with steel wool to make the aluminum shine, and then weathered it with black paint to give it dimension. This had to be done one hundred plus times, most of which was spent simultaneously cursing myself for having such big stupid plans that involve so much work. And most of that work was hidden by the cloak. Blargh. Thorin’s jeweled belt buckle is also a pretty big visual point in his costume, so I wanted to hit that recognition point as well. This involved resin casting some gems (the backs of which are painted with metallic nail polish, which gives them a reflective sparkling quality) and socketing those gems into a belt buckle made from more foam, this time from one of those thicker foam floor mats. Cosplayers work wonders with floor mats, but so far, I haven’t managed to do as well. It’s harder to cut, takes more heat to shape, and I think ultimately the belt buckle turned out just OK. I also sewed the tunic, the cloak, made leather patches for the knees of his pants, and repainted a plastic toy sword, and Thorin was complete! My costume was a little more fraught. I vacillated between a number of options: lady bearded dwarf, Tauriel, Bilbo, and Thranduil, ultimately deciding to go with armored up party king Thranduil. The armor builds started off ok, with foam handguards and bracers, which flexed really well with my arm and hand movements. The raised portions were made with puff paint, and while it’s useful to make designs, I have determined it is also the devil’s paint, and this is never more evident than when you’re trying to paint a long, smooth, curving line with it. Three quarters of the way through and PFHT!!!!!!!!! Surprise air bubble! which will cause paint to spurt everywhere and/or come out in a horrendous lumpy mess. And then it takes a lifetime to dry and if you touch it even one second before it’s fully, fully, fully dry, it will wetly smear all over everything. My hands were silver for at least three weeks. While waiting for armor to dry in various stages of puff paint and elmer’s glue, I started constructing the cloth portion of my costume. No pattern, just eyeballing it. It turned out surprisingly ok except the neckline which I hated and didn’t know how to fix. I figured it wasn’t all that important because the whole thing would be covered with chest and shoulder armor anyway. I made his complicated shoulder pauldrons and though they weren’t exactly identical, I felt they looked pretty cool. But then I started on the chest armor and the shit hit the fan. Because it’s such a large piece, I needed to make it out of the larger foam floor mats rather than the fun foam (which is generally about the size of a sheet of paper). That foam is thiiiiick, and a piece that size needed more heat to shape than my hair dryer could provide and some dumb part of me refused to buy a heat gun for this one thing. I’m already a fat person, and the additional thickness of armor that I couldn’t get to curve in anywhere made me look like a walking barrel. And THEN there was the complicated pattern on top that turned into a goddamn puff paint nightmare world. I needed to reassess. Could I made the costume work without the chest armor? Eeeeeeeeehhhh. The shoulder pauldrons were supposed to attach to the chest armor to keep the weight of the cloak from straight dragging the whole business off my shoulders, so that wasn’t working super well. The wig that I bought was way too long and thick, and at this point in the game, I hated the whole thing together but it was too late to change to something completely different. Thrilled. So thrilled. Ignore the PJ bottoms. And all the Halloween bins in the background.

Soooo it was at this point that I decided to ditch all the armor I’d made. The handguards, the bracers, the boot armor, the pauldrons, and especially that fucking chestpiece. I cut and thinned the hell out of the wig. But with the armor chopped, it really needed something  else to make it more Thranduil. I determined that something else was his branch crown. I made the crown out of twisted wire: which I then coated in hot glue and painted brown. At this point, it looked like a crown of weird turds, but I kept at it: Thranduil’s crown in the movie just has leafy bits in it, but I felt like he was the sort of dude who would probably accessorize to the season, so I added in sprigs that had tiny pumpkin looking things. And with that, I was done! And not too soon, I think I wrapped the whole thing up the day before my Halloween party. All hail your King under the Mountain and your Party King!

Halloween 2016: Season of the Witch