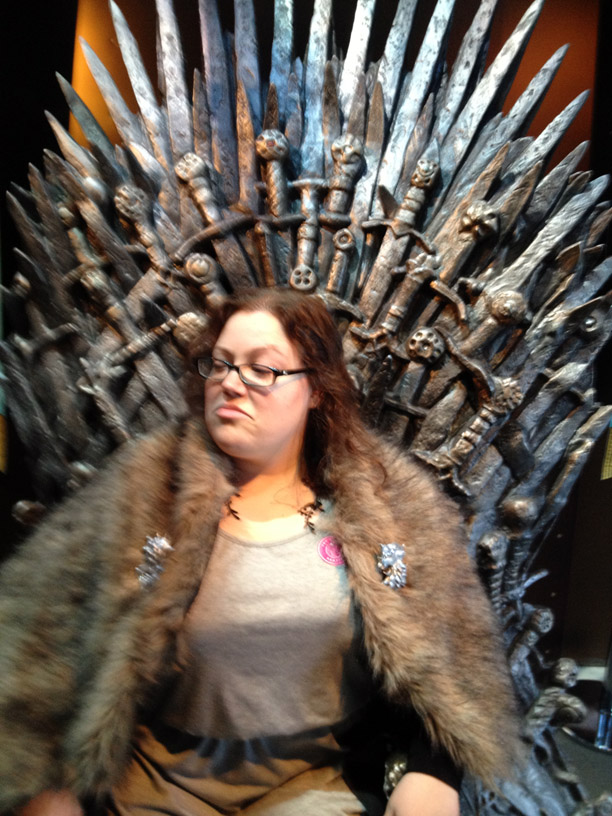 One of the current exhibits at the EMP is Fantasy Worlds of Myth and Magic, a place to see costumes and other memorabilia from various fantasy movies and tv shows, and more importantly, when I visited, they had an Iron Throne you could sit on. There was no way I wasn’t bringing my Stark cloak with me, but as I pulled it out of my bag, I became very self-conscious. Would the people in line behind me laugh at me? Snicker at Captain Dork? I needn’t have worried: after Beth and I finished taking pictures, I turned to the girls behind us and asked if they wanted to wear it and they couldn’t have been more excited about it, saying they had wanted to ask me if they could wear it but were too afraid to do so. In the Fantasy Worlds of Myth & Magic, we’re ALL Captain Dork. Inside the exhibit, they have a test to determine what fantasy archetype suits you. Is anyone at all surprised I was categorized as a witch? I don’t recall the exact description, but it was probably something like “Self centered jerk, eater of the cute, hater of children, wearer of inappropriately dark and heavy clothing in summer”. And this is only because they didn’t have a lazy slob archetype, which is the witch only with more crumbs and less leaving of the house. Speaking of witches, they had the amazing feather cloak from Snow White and the Huntsman on display. Just like at another museum with another covetable cloak, I was tempted to break my way in there and stride out cloaked to the nines, but I again barely resisted the impulse. Of course, owing to the fantasy setting, everything was dimly lit and it was impossible to get a decent photo, which is one of my bigger gripes about the exhibit: it’s often too dim to see any of the details, and when I come to see a display of costumes, I want to see all the details. I want to see the hand stitching, the beading, the things that weren’t caught or conveyed by the camera. When you stick a dark feather cloak into a dark case behind reflective glass, all you really see is your own dark reflection looking back at you. They also have an interactive “create your own fantasy map” display; you can create a pirate, anime, or wizard map inside the exhibit, save it to a card, and print it out at the gift shop. Since I’ve had some form of pirate-themed bathroom for a decade, the choice was obvious. While I did end up printing mine (but not hanging it), the amount of time you’re given to create a map is too short, and I wasn’t able to make it as detailed as I’d have liked: two of my islands have nothing but trees on them. I understand they have to keep the line moving on busy days, but when I went, there was no one waiting behind me, and it would be nice if the system were more flexible. In addition to Fantasy Worlds of Myth and Magic, they are concurrently running an exhibit about the lure of horror films, complete with an Alien costume and facehugger from “Alien”, Jack Torrance’s axe from “The Shining” and a number of videos featuring Roger Corman, John Landis, and Eli Roth talking about their favorite horror films and how they personally approach the genre. They also had a soundproof “scream booth” where you’re photographed giving your most bloodcurdling scream and you become part of the exhibit. I may have blown one of poor Beth’s eardrums because “tone it down a notch” isn’t something of which I’m capable. If you’re in the area, both exhibits are running indefinitely. If you’re not, there are tons of great screams on the EMP’s Flickr stream.