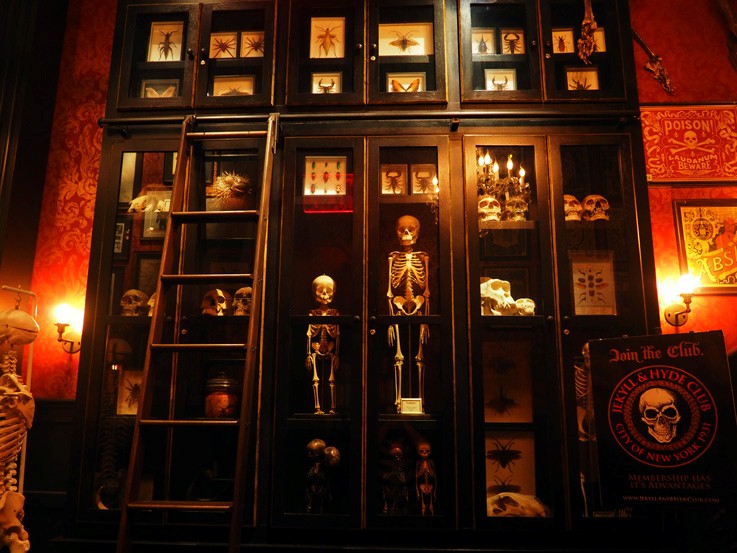 When I talked about my upcoming trip to New York, my polite friends would inevitably inquire what sights were on the docket, and were generally perplexed when the first words that came out of my mouth were “I’m going to the horror Chuck E. Cheese!”  The look of confusion in their eyes would say everything. “Isn’t that just the regular Chuck E. Cheese?” “You’re going to a city with the best restaurants in the world and you’d choose Chuck E. Cheese?” “I bet the horror is what you find in the ball pit.” “What’s wrong with you?”

In some ways, The Jekyll & Hyde Club is the horror Chuck E. Cheese, but it’s also so much more: if Chuck E. Cheese and an English library and freak show shared a magical evening and somehow split their DNA three ways and had a baby, The Jekyll & Hyde Club would be that baby. Unlike Chuck E. Cheese, the animatronic parts of the restaurant were created much more recently than the 1970s, and they’re creepy in an enjoyable way, not a “I can’t believe they’d let that dusty half-rotted material jerk around near food intended for human consumption” way. No detail was neglected: the servers dressed like Victorian-era butlers, complete with bowler hats, every seat in the house was near something interesting to look at (unlike the sequestered mine area in Casa Bonita), there was even a secret entrance to the restrooms through the fireplace and down a book-lined corridor, AND in said restrooms sometimes a face would pop out at you in the mirror like the Bloody Mary nightmares of your childhood sleepovers….good thing you’d already let go of your bowels just minutes earlier! The eyes in some portraits would move. Other portraits would morph over time–sometimes it would look like a standard portrait, sometimes the subject would blink, slowly erupt in boils, his face would twist in pain, or the shadow of a tarantula would start crawling across. It was excellent. Truth be told, this place looks exactly how I’d decorate my house if I had infinite money and no one to tell me no. Except I’d also have a dinosaur room. I was seated opposite this, so I had a lot of time to watch these most-excellent moving portraits. Sometimes the pharoah would talk! Frankly, I’ve seen a few dolls that are scarier than this. What I didn’t know was that the Jekyll & Hyde Club also contained its own haunted house: The Chamber of Horrors. If I hadn’t already decided to visit, this would have sealed the deal for me. Objectively, it’s not the best haunted house I’ve ever been to–it was fairly evident that there were only a few employees working inside and they relied overly much on the room being pitch black for scares. However, just having the place to ourselves was enough to make it better than our experience at Halloween Horror Nights Orlando : it’s hard to be scared with a line of bros penguin walking with their arms around their girlfriends in front of you. I don’t know how the experience would change when the restaurant is full. The night that we went was relatively dead and we were some of the last people through the maze before it closed for the night. They also put on combination live/animatronic show every so often (Every hour? Two hours? We only saw one while we were there, so it’s not often enough to be obnoxious) that was definitely Frankensteinian in nature, not Jekyll and Hyde. Not that I’m complaining! The show was entertaining, the actors looked like they were having fun, and the audience was definitely into it, which are all important elements to keep it from from feeling sad and awkward.

It’s weird to talk about a restaurant and not mention the food, right? I went in with really low expectations, because restaurants in this category rarely make food that you feel enthusiastic about eating, and I ended up being more than pleasantly surprised, as was Jason. Granted, the things that we ordered were hard to mess up (a Memphis burger and a margherita pizza, respectively), neither one of us have food critic tendencies, and we were both quite hungry, so a boiled shoe probably would have been acceptable at that point in time as long as it was a large one. Still, I would say that it outclasses many of its theme restaurant peers. As far as prices go, I didn’t find it shockingly expensive save for the stupid-expensive drink I ordered ($20!!! In USD! For a drink that didn’t get me drunk!)–in general, the prices seem in line with other theme restaurants. They do tack on a $3 “entertainment fee” per person which is a little annoying, but seems reasonable by comparison to Casa Bonita‘s insistence that no one may enter without purchasing an entire meal. Neither would be preferable, but ultimately $3 is negligible. The Chamber of Horrors isn’t included in that $3 fee, it comes at an additional charge which varies depending on whether or not you’re dining at the restaurant.

I would say that the biggest downsides to the Jekyll and Hyde club are that it’s in Times Square (which is all-around horrible unless you are a fundamentally different sort of person who enjoys massive crowds of people wandering aimlessly and excruciatingly slowly in a mall filled with stores you have at home and advertisements flashing at you on all sides…it’s like walking in a stinky, annoying, pop-up banner), the seats all have arms which make them difficult to climb into when you’re butted back to back with another customer, and your experience is wholly dependent on how much effort the employees are willing to put forth into their performances. None of these caveats would prevent me from going back, should I find myself in NYC at some point in the future. In fact, I think Casa Bonita has a serious contender for the title of “most exciting restaurant in the world.”