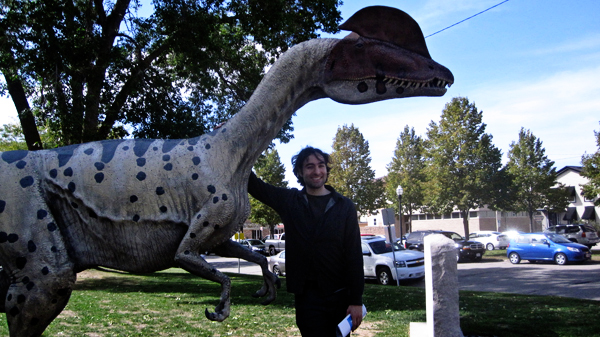 Will I ever get tired of visiting dinosaur museums? In a word: NO. The Dinosaur Discovery Museum in Kenosha, Wisconsin packs a lot of dinosaur into a relatively small space, eschewing individual platforms in favor of one large grouping. It’s the only museum in the United States designed specifically to show the evolutionary transition between dinosaurs and birds and it does so with the largest collection of theropod dinosaurs in the country; by containing them all on one platform, it’s easier to compare them to one another. Especially delightful are the motion sensors which trigger dinosaur noises and make you feel as though you’re being stalked around the room. I thought it was a trick question with the answer being “this museum!” Although it’s not a scientifically sound theory, based on similar facial expressions, I postulate that this dinosaur may in fact be Napodog’s ancestor as they both appear to be pleased as punch to be tracking mud around like it takes no work at all to clean the floors. NONE AT ALL. Happy-go-lucky jerks. Downstairs, you can watch fossils being cleaned and prepared for research. You can also assemble a dinosaur puzzle and do some coloring; of course we elected to do all of these things, for science. As you can see, Jason’s Eoraptor explores how one might camouflage itself in the 1980s, and mine is exploring hipster fashion. SCIENCE!