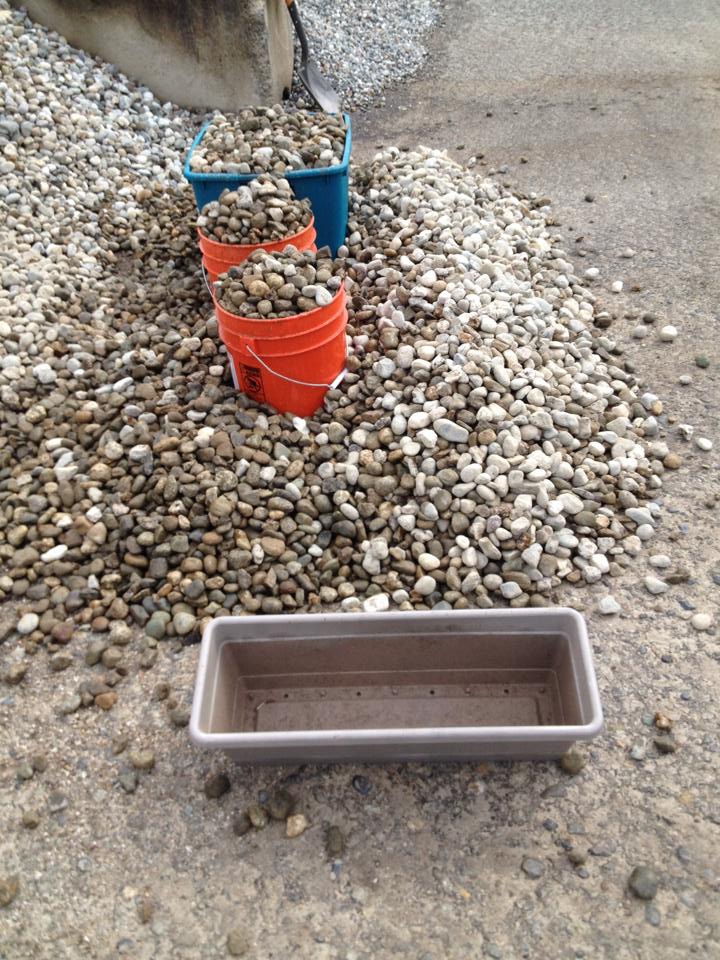 Our house came with a giant cement slab in the backyard, indicated in the listing as RV parking. As we have no intention of ever purchasing an RV,  and it’s actually one of the best areas in the yard in terms of sunlight, I decided the best use of the area would be to set up a container garden. Not the mishmash of pots we had at the rental house, but essentially large raised beds, only on concrete instead of more soil.

I’ve learned a few things during this endeavor:

First things first, we needed to buy some lumber. The best stuff to use is untreated cedar. However, when the dude at the lumberyard told us our grand total, I decided that pressure-treated wood probably wouldn’t cause me to sprout a third arm. Once the wood was delivered and assembled to our liking (we decided to go with two taller beds rather than four shorter ones to give plant root systems plenty of space to spread out), it was time to order some dirt and some rocks for drainage.

The company we ordered our dirt from had a split-load fee, but more than that, they required that each item type you order be a minimum of two yards, which was much more than we needed. That’s silly, I thought. There’s a materials yard not far from the house, so I’ll have the dirt delivered, but I’ll haul home the rocks myself.

The soil was set to deliver on Saturday, so I needed to pick up the rocks on Friday so I’d be home for the soil delivery the next day. I drove off to the materials yard in our dainty Saturn SL2 with one of those plastic storage bins, a couple of home depot buckets, and a couple of heftier plant pots, just in case. It wouldn’t be that many rocks, after all.

When I told the woman at the counter that I wanted to buy a yard of rocks, she looked at me, looked at the car, looked at me again, and asked if that’s what I planned to haul it in. “You don’t have a friend with a truck? Home Depot rents trucks, you know.” “I know, but I think it will be fine. Look, I brought a storage bin and some buckets.” “Well….under the circumstances, how about I sell you a half yard for now and you can see if you want more later?”

I said that would be fine, and she sent me down to the rock area to wait for the guy with the loader. When he arrived and scooped an entirely full bucket and asked me to set my bins down in front of it so he could “pour it in” and save me some work, I began to realize I had made a mistake. My buckets filled almost immediately and the rocks kept coming and coming and coming. A half yard of rocks was a lot more than I’d envisioned. Then I discovered that the storage bin was so heavy that I couldn’t budge it so much as an inch, not even pushing against it with all of my body weight. There was simply no way I was going to be able to lift it into the car. The loader operator asked if maybe I’d rather have the rocks delivered instead, and that sounded like a good idea to me, but when I found out that it would cost six times more than what I had paid for the rocks to have them delivered, I decided that I’d made my rocky bed and I needed to lie in it. I rolled up my sleeves, asked if it was ok if I made a few trips, and got to work. It took me six trips to get all of the rocks home. Six trips. I don’t think they expected me to keep coming back after trip two. By the time trip six rolled around, I was so bright red from my exertions that one of the employees helped me load the last of it into the car because I think he was afraid I might burst a vessel and die on their property. The important part is that I did manage to get it all home so I’d be ready for the dirt delivery the next day. From this angle, it doesn’t look like that much. This angle tells the story better.

We have literally twice as much dirt as we needed to fill the beds. I’ve filled the beds, some containers, spread some out on the landscaping, and we still have an enormous dirt pile covered with a blue tarp in the backyard that sort of looks like we might be hiding a body. Or twenty. Just a big ol’ corpse pile, hanging out. Eventually I plan on building a strawberry tower, which will help use some of the dirt, but it looks like Mellzah’s Folly (yes, the dirt pile has a name) will be around for some time yet. The smaller rock pile, Mellzah’s Folly Jr, will be keeping it company. The plants are loving it, though, and I’m loving having a happy garden. Plus this third arm is really coming in handy!