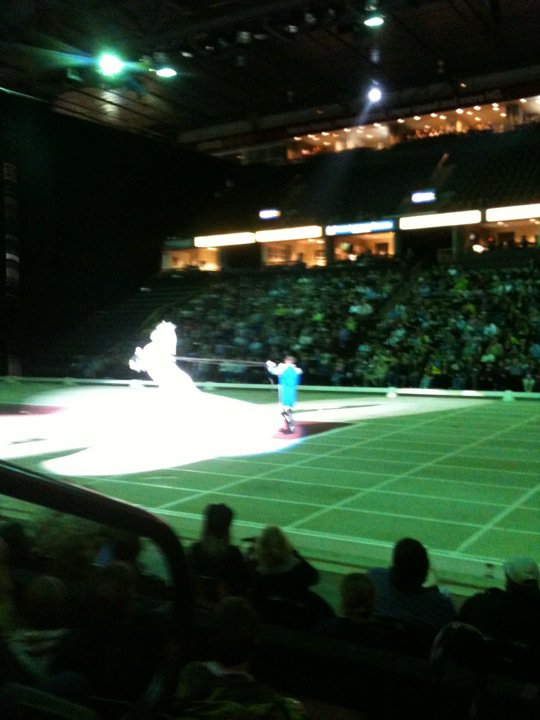 Today, Jason took me to see the Lipizzaner show at Comcast Arena. I, like many young girls, grew up obsessed with horses. I participated in the 4-H Horseless Horse program, which is like a rent-a-horse service for preteens. “One horse, please” topped every Christmas wish list until my parents could no longer take me tearing out the front door in sub-zero temperatures every December 25th, looking desperately through snowdrifts for the horse which Santa had assuredly left for me. (They weren’t so concerned about how distraught I was, more over the heating bill that resulted from doors and windows being flung open.) However, their patience for my obsession was limited, because there’s only so long an adult can feign interest in watching twelve year olds in cowboy hats riding shaggy ponies circle a ring over and over and over. Eventually it got to the point where they pretended that all horses had died from a rapidly-spreading horse disease, and so they flipped the channel whenever they saw something with four legs on TV larger than a dog, avoided taking me to Medieval Times, and nearby Tempel Lipizzan shows were also a no-go.

Over time, I began to suspect that my parents weren’t exactly truth-tellers on the whole horse issue. When I heard on the radio this week that the dancing horses would be on display, I came home and immediately demanded that Jason take me.

…As it turns out, perhaps my parents didn’t have so much of a problem with horses as they did with mind-numbing, soul-sucking boredom. I hadn’t expected the show to be a thrill-a-minute, and I would have been sufficiently entertained if I had been busy trying to take decent photographs, but Comcast Arena has a ban on professional cameras, and I was given the option of either returning it to my car, where some nearby transient could break in and steal it, or checking it in with Comcast Arena employees, and letting one of them steal it. I decided to take my chances with the car instead of leaving it in the hands of The Worst Company in America, where lying and stealing must be in the employee training manual. Everyone else with their phone cameras and handheld cameras were allowed inside, so the message they’re sending is “Comcast: We love a shitty, blurry picture!” At least it’s in concordance with their television service. I wonder if when the wind blows moderately hard, the arena goes down, too?

So instead of being distracted with fiddling with my camera settings, I was forced to listen to the MC and observe the audience around me, focusing my hate beam. It almost read like a single mom’s convention, filled with a lot of greasy-haired, exhausted women dandling one or more very young children on their laps. The children were too young to appreciate the show, so it was clear these women were there to ogle some horses for themselves. Save for the miracle of birth control, I would probably be one of those women. Nearly everyone was decked out in Everett-level finery, because nothing says “big day out” like shorts with a hole in the rear end, t-shirts with stains, or Batman capes (I should note that said cape was on an adult, not a child).

I very nearly lack the language to describe how thoroughly I hated the MC. When he wasn’t talking about the history of the horses in excruciatingly boring detail, he was stumbling over the names of the horses and the riders, or telling jokes of the sort that cause one to want to find a flaming hot poker and jam it into their ears to avoid the risk of hearing one ever again. It’s like he built a comedy career around jokes that make audiences want to groan in despair.

Because the horses are named after their sire and dam, all of their names are quite similar, and it’s difficult to tell them apart. Jason and I solved this dilemma by giving them more memorable names: Tapey Joe, Poopy Bob, Foamy Steve, and Slobbery Mike. Tapey Joe was named as such because when he was supposed to perform a jumping trick, he pulled up some tape from the arena floor onto his hoof, and then his leg bandages came untied and he turned into a sloppy, angry mess. They kept trying to get him to perform the trick, emphasizing how natural the movements are to these horses, but Tapey Joe was having none of it and kept kicking out at his trainer. I hoped he would break his lead and put a hoof through the MC’s jokehole, but no such luck.

Aside from the incident with Tapey Joe, the rest of the show was entirely unmemorable, and word must have gotten around about it, as the arena, which is about the size of a large-ish high school gym, was less than a quarter full. I feel like they could have done a few things to make it more interesting and profitable, and I’ll list those things now for free, as I’m feeling charitable:

One: Know your audience. Sure, the show emphasizes the tradition of training these horses in this manner by accompanying the performances with classical music, but in this day and age, that doesn’t play well, particularly in places like redneck mecca Everett. If you have the horses burst through the curtains in a shower of fireworks and the strains of “Rock You Like A Hurricane”, the audience is way more likely to get pumped up.

Two: People don’t want to buy your program for an extra ten bucks. There’s this thing called the internet now, and people can look at as many pictures of horses as they want to for free, with their pants off if they would like. If you want to get extra money from your audience, institute a U-Pet-Em program where for an extra ten bucks, they can pat the horse’s neck, and for an extra twenty, have their picture taken with the horse. People are there at the show because they want to see pretty horses and imagine riding them. They aren’t going to get that feeling from a printed program.

Three: People are there at the show because they want to see pretty horses, not to listen to an MC yammer on and on with the world’s worst repertoire of jokes. More horses, less MC. Maybe have the MC lay on the ground and have the horses perform a leap maneuver over him.

Four: Less dressage, more tricks. If you’ve seen one horse perform a flying lead change, you’ve seen them all. There’s no need to have every horse in your lineup perform that same maneuver over and over and over again. Instead, have the Evel Knievel of horses jump over a flaming bus. Have a Horseasaurus robot stomp around the ring. Give your audience something to marvel over and talk about!

Five: Let people take decent pictures. Seriously. Good photos are a good, free advertisement. Not one person who sees this photo is going to think “Hot DAMN I need to see this show no matter the cost!” Man, that light blur inside that lighter blur is, like, so inspiring.

Six: Run it like a reality show. Let audience members vote on which horse gets sent to the glue factory. Will it be the obstinate one who won’t perform tricks? The ugly one that snotted on the person in the wheelchair in the front row? The other obstinate one who performs tricks poorly? YOU DECIDE.

In conclusion, until this horse act steps up its game, you’re better off staying home and watching horse videos on youtube. Here’s one to get you started.

18 Comments → Coming up on America’s Next Top Gluestick