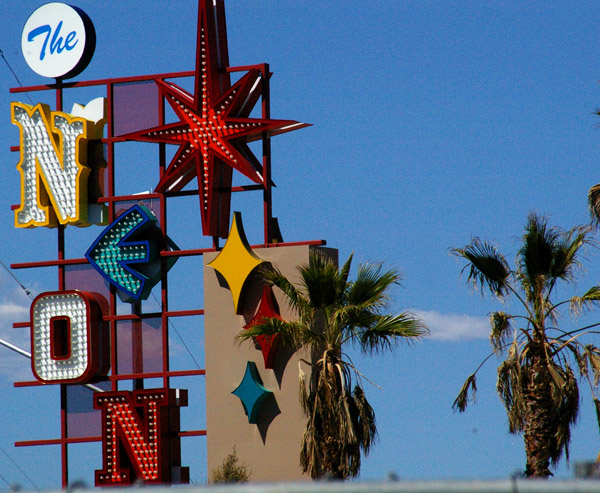 On our trip to Las Vegas, we made sure we had time to visit the neon boneyard, as it’s something I’ve wanted to do for a few years and kept missing. It will eventually be turned into a full-fledged museum, but at the moment, it’s basically a backlot full of signs out in the blazing Las Vegas heat. I’m not exaggerating: we were told that the 106 degree heat was the hottest tour they’d given this year, and they discourage people from straggling from the group as they’ve actually had issues with people keeling over!

Thankfully, no one keeled over on our visit, though I did learn about some of the more unpleasant ways the body can sweat. The neon boneyard collection contains any and all of the signs they could scavenge from the neighboring casinos, either from when they replaced their signs or went out of business. So, as one might expect, the signs are rusted or otherwise broken. Our tour guide instructed us to please avoid touching them (apparently some people have attempted to lick the signs? I can’t begin to fathom why) as not only are they rusted and full of lead and asbestos, but they are also irreplaceable–they consider the signs their Mona Lisa, and you wouldn’t go and lick the Mona Lisa, would you?

No sooner had she given her instructions than I backed away from the group to take a photo and promptly stumbled backward into a sign–not enough to fall, but enough to give it a kick, which made a terrible clattering sound. My only cover was to disguise my voice and say gruffly “It was an accident!” and then I skittered away. I don’t know if that’s a resume-worthy line: Kicked the Mona Lisa. That S has tasted my foot. We were also told that we were not allowed to use any of the photos we took for commercial purposes–when I asked how they would know, they said “Oh, we’re big on the internet.” So I told them that they would probably find my blog, and not to be aghast at the fat Elvis I’d photoshopped in front of a sign. So as not to disappoint: City of the Dead: St Louis Cemetery No 1

6 Comments → “Come to think of it, every shift at the cemetery is the graveyard shift.”: The Neon Graveyard in Las Vegas