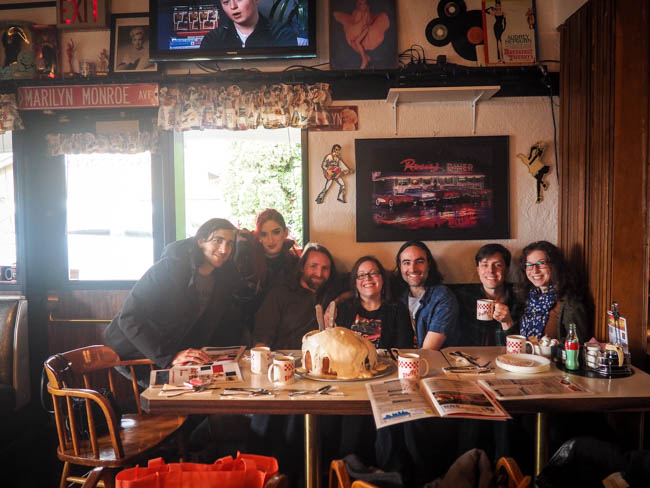 Why do people climb Mount Everest? Conventional wisdom declares that they do it because it’s there. For Jason’s 34th birthday, I wanted to do something similarly life-affirming and reckless: eat the biggest cinnamon roll in the world. Because it’s there, and so are we. Not by coincidence, the world’s largest commercially available cinnamon roll (in other words, not a Guinness attempt, but something that could be acquired without trying to make it myself) is found a couple hours’ drive away in the town of Longview, Washington, at Stuffy’s II, a restaurant which prides itself on  serving all manner of “stuff”, biggie-sized. They’ve got pancakes the size of wagon wheels, massive 5lb cinnamon rolls, and other giant platters of food available, but only one item is so large, so full of potential energy, so Hulk gut-bustingly huge that it requires 24 hour advance notice of one’s intention to order: their 10.5lb cinnamon roll, aka the “Bear Roll”. Like its namesake, the bear roll is both massive and dangerous, containing a whopping 8,000 calories. If you can finish a bear roll by yourself in less than an hour and fifteen minutes, you’re inducted into the Stuffy’s II hall of fame. It’s one of those bucket list items, in that, if you go it alone, there’s a good chance you’ll kick the bucket.

As dedicated as I am to eating, and as much as Jason likes cinnamon rolls, I knew there was no way we’d be able to defeat it by ourselves, so we assembled a team of adventurous souls to make the trek with us for a full afternoon of face-forking. Even so, with seven of us in on the quest, we’d each need to eat 1.5 POUNDS of cinnamon roll in order to declare victory. It wouldn’t be easy, but I was convinced it could be done. For us. For posterity. Because it was there. To pump us up on the trip to the restaurant, I assembled what is possibly the most banging cinnamon roll based playlist in the world.

I’d seen photos of the bear roll. I’d watched a video of someone eating one. I thought I was prepared. When we arrived, I saw some cinnamon rolls rotating in a case and thought “That’s large, but doable.” I was wrong. Those rotating rolls were their regular cinnamon rolls, which bore only a passing resemblance to the behemoth our waitress delivered to the table. Prior to its delivery, we’d been contemplating ordering entrees to balance out the roll. The waitress wisely suggested that we spend some time with our bear roll prior to ordering more so we could better gauge what accoutrements the situation called for. We tore into the roll gamely, each slicing off a slab for their plate. As we sliced, still more frosting oozed out of the beast as though it were a bottomless fount. It seemed like everyone enjoyed their first few bites. Unfortunately, after that point, we all hit a wall. The sheer sweetness was overwhelming. When all that sugar hit my system, my body heated up like a furnace, and it felt like every cell in my body was on alert. My mood was high. I was almost delirious with sugar-based happiness. Shortly thereafter, however, I felt as though I couldn’t possibly eat another bite. It wasn’t the sort of taut-stomach fullness I anticipated I might feel after a large meal, but rather a hollow sort of nausea that roiled around and told me that I shouldn’t so much as even think about taking another bite. A look around the table confirmed that everyone else felt similarly and it became clear that although we’d made a valiant effort, the bear was simply too massive a beast for us to conquer.

Luckily, I was prepared for both outcomes.