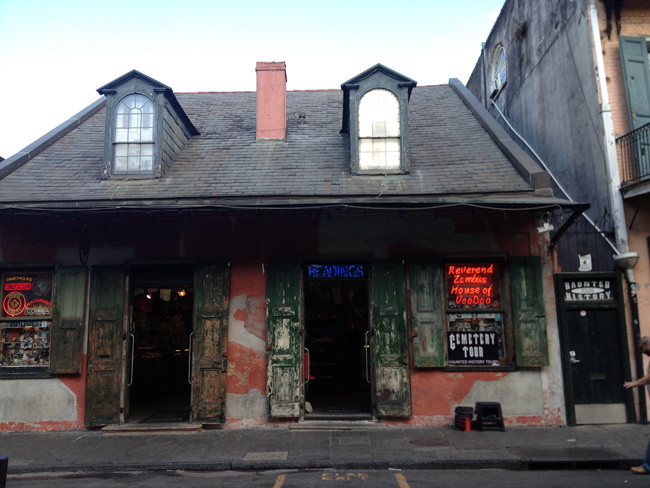 The above-ground cemeteries of New Orleans have long-fascinated visitors to the area. Mark Twain famously said that the city of New Orleans has no architecture, save for its cemeteries. Nicolas Cage even bought space for and constructed an enormous whitewashed pyramid for his eventual interment. Thanks to vandals, disrespectful tourists, and ne’er do wells, you actually can no longer visit St Louis Cemetery No. 1 if you don’t have relatives interred there unless you are accompanied by a licensed tour group. I selected Haunted History Tours at random (all the tour groups advertise that they’re the number one tour group, and they all pretty much depart from one voodoo shop or another so it’s impossible to differentiate between them from afar), and fairly shortly into the tour I was sure I had made the correct choice. I’d seen a number of tour groups wandering through the french quarter, and some of them were so large that I’m not certain the people in the back knew what was going on or could even see the thing they were there to hear about before the group made it to the next thing on the list. Our tour group was seven people plus the tour guide, which made it easy to hear and ask questions and get a more personal tour experience.

We departed from Rev. Zombie’s House of Voodoo (meh, I’ve seriously seen some of the candles for sale in there at Urban Outfitters), and walked up the street toward the cemetery, learning the original sites of the graves so none of us invest in potentially haunted property, and taking a couple of quick detours at Louis Armstrong Park and Basin St. Station to talk about the history of the area, learn about why people and GPS devices get so confused when talking about directions in New Orleans (you’re not going north, south, east, and west in the crescent city–you’re going lakeside, riverside, uptown and downtown), and take one last opportunity to use a restroom since (surprise!) there aren’t any in the cemetery. While we were in Basin St. Station, our tour guide recommended a book, Frenchmen Desire Good Children, about the history of New Orleans and its interesting street naming conventions. Somehow, I got the title mixed up in my head and went back to Basin St. Station later and requested to buy a copy of City of Saints and Bastards, to which the people working there looked quite perplexed and asked me which tour guide recommended that book, again? It turns out once they figured out which book I was actually after, that they were sold out, but they also enthusiastically praised it, and said it’s the book that all New Orleans tour guides study before they take their examinations. I bought it later on Amazon and just very recently started to read it, which I wholeheartedly recommend you not do, because it is the single most racist piece of shit I’ve ever read. I said “What the fuck?!?” more times in the first ten pages than I did throughout the entirety of the series of Twin Peaks, and it wasn’t a perplexed kind of Twin Peaks-y “What the fuck?” but a truly horrified, can’t believe this book came highly recommended, really can’t believe that the author just compared native americans to dogs sort of “WHAT. THE. FUCK.”. I think I would have preferred City of Saints and Bastards to this hot garbage. But back to the tour. It was interesting to see how differently the city of New Orleans handles burials. We learned that because of the heat inside the tombs, in about a year’s time, there are only bones left in the tomb, which means that they can be reused over and over again, adding more names to the plaque on the front, while the bones intermingle in an area at the bottom. This is why you see double-decker tombs in the cemetery, because if you had multiple family members die less than a year apart, you wouldn’t want to open the tomb until the decomposition process had ended. With two, unless your family was having a really bad year, it’s unlikely you’d have to worry about opening up a tomb that wasn’t…uh…fully baked. We also learned that tomb maintenance is handled by the family or by a trust left by a family for said purpose, which is why some tombs look pristine and others are crumbling.

Marie Laveau, the voodoo queen of New Orleans, is interred at St. Louis Cemetery No. 1, and even though maintenance people keep whitewashing away the Xes people scratch on the sides of the tomb, hoping for her favors even in death, more keep appearing. Evidently, if your wish is granted, you’re supposed to return and circle your Xes and leave her a gift in accordance with the size of the favor–although her tomb has been cleaned, it’s plain to see that not many favors are granted. Some people also believe that Marie Laveau’s bones are not interred within that tomb but are instead elsewhere in the cemetery out of fear of them being stolen, which is why triple Xes are found all over various tombs in the cemetery from people hedging their bets. Visiting this cemetery made me think a bit more about what I’d want for my own body when I die. I’ve joked about being packed into a lipstick tube and launched into space, I’ve suggested that it would be totally fine if I was just tossed into a dumpster, but it is important to really consider the impact not only our lives have on the planet, but also our deaths. The single coffin below ground has to be a thing of the past, as our world population has exploded and there just simply isn’t room. Family crypts are an interesting solution. Maybe I can get in on Nic Cage’s badass pyramid. Either way, right now, I’m seriously in the mood for some brick oven pizza.

The voodoo that you do

4 Comments → City of the Dead: St Louis Cemetery No 1