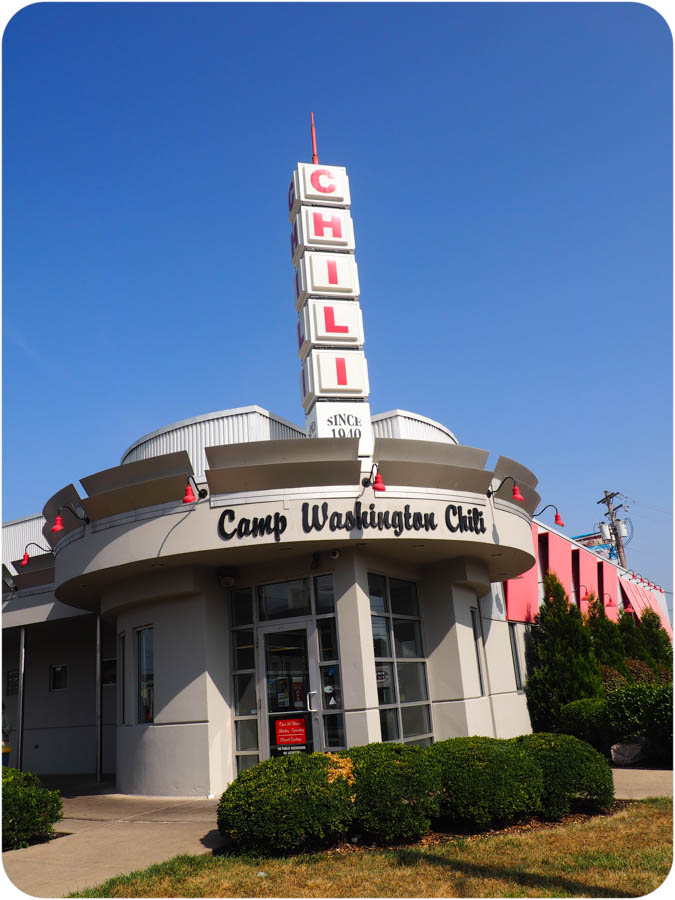 Of course I was not going to take a day trip to Cincinnati and not eat the style of chili for which they are famous (or infamous, depending on one’s perspective on chili). I will tell you that I have never, never been to a city where chili is so heavily advertised and consumed. Chili restaurants in Cincinnati are the equivalent of Starbucks in Seattle: there’s one on every corner, and if you miss that one, there’s one less than a block away. Who is eating all this chili?! And pretty much all of their chili chain stores have drive throughs, which I also find a little mind boggling if only because chili doesn’t strike me as the consummate eat-on-the-go food. Like maybe, maybe I would concede this point if it was of the “frito pie/walking taco” variety where you dump chili and some fixings into an individual corn chip bag (there’s plenty of room in there, after all, given that each of them contains, on average, five to seven chips maximum) and eat it out of the bag with a fork. Or turn around and redump the contents of your bag into your mouth, I’m not the etiquette police. I can barely spell etiquette on the first try, much less put on pants and enforce a system of rigid and complex rules that seem archaic in modern society. Just, for the love of god, as you’re pouring chili and chips into your maw, please try not to burp at the same time.

Regardless, Cincinnati chili is a different beast altogether. Cincinnati chili is a spiced meat and tomato sauce melange that is used as a topping for two things: spaghetti, and hot dogs. It is NOT intended to be eaten by the bowl like chili con carne, and the people of Texas would probably rather blow Ohio off the map than refer to Cincinnati’s signature sauce as chili. If you decide on spaghetti, you can order your Cincinnati chili a number of ways. As in, literally, you tell the server whether you want your chili two way, three way, five way, etc. The least you can order your chili is two way, which is the chili plus the spaghetti. Three way: chili and spaghetti and cheese. To add to the confusion, not all of the ways are the same at all of the restaurants, but they all involve chili, spaghetti, cheese, beans, and onions. Oyster crackers are commonly given on the side as a garnish, but for some reason, they do not count as an additional way, forming the ultimate Six Way Chili.

I did some polling at the American Sign Museum and they all agreed that Camp Washington Chili was the place to go for the best Cincinnati chili, and in my later research, discovered that it had won a James Beard Foundation American Classics award in 2000, so I feel confident that the Cincinnati chili I ordered and ate was its best possible iteration. The verdict? It’s tasty but I think you have to grow up on it to get it in your blood enough to crave it. O Pie O was a late addition to the rounds. When we arrived in Ohio, my mother in law had stacks and stacks of every magazine and brochure that had anything to do with Ohio tourism (she knows me pretty well on that score). I flipped through all of them, and a glossy page calling the Honey Vinegar Pie at O Pie O Ohio’s best dessert stopped me dead in my tracks. Ohio’s best dessert? Within striking distance? Obviously we were going to go. Obviously. The verdict on this one was…not so good. I don’t know if I caught them on an off day in the kitchen or what, but the crusts on all of the pies were tough and leathery, not flaky in the least and not nearly tender enough to cut with a fork. Without a good pastry, you really cannot have a good pie aaaaaand it’s especially hard if the insides aren’t all that great, either. I can appreciate the tangy silkiness of the honey vinegar, but it felt like it needed something. The blackberries in the blackberry buttermilk pie were unpleasantly sour.  On the eternal battle that is cake v pie, I’ve switched to team pie, but I’m finding it difficult to go to bat for this particular pie. Now this pie that I made for my Game of Thrones birthday that disappeared before I got a slice and so many people came out of my kitchen moaning about its deliciousness that I had to make it again like a week later, THAT is a pie that I’m willing to ride or die on team pie for. Go eat that pie and know that because of something some magazine said once, that you’re eating a dessert that’s better than any in Ohio.

Newport, Ohio, the Basketiest Place In The World