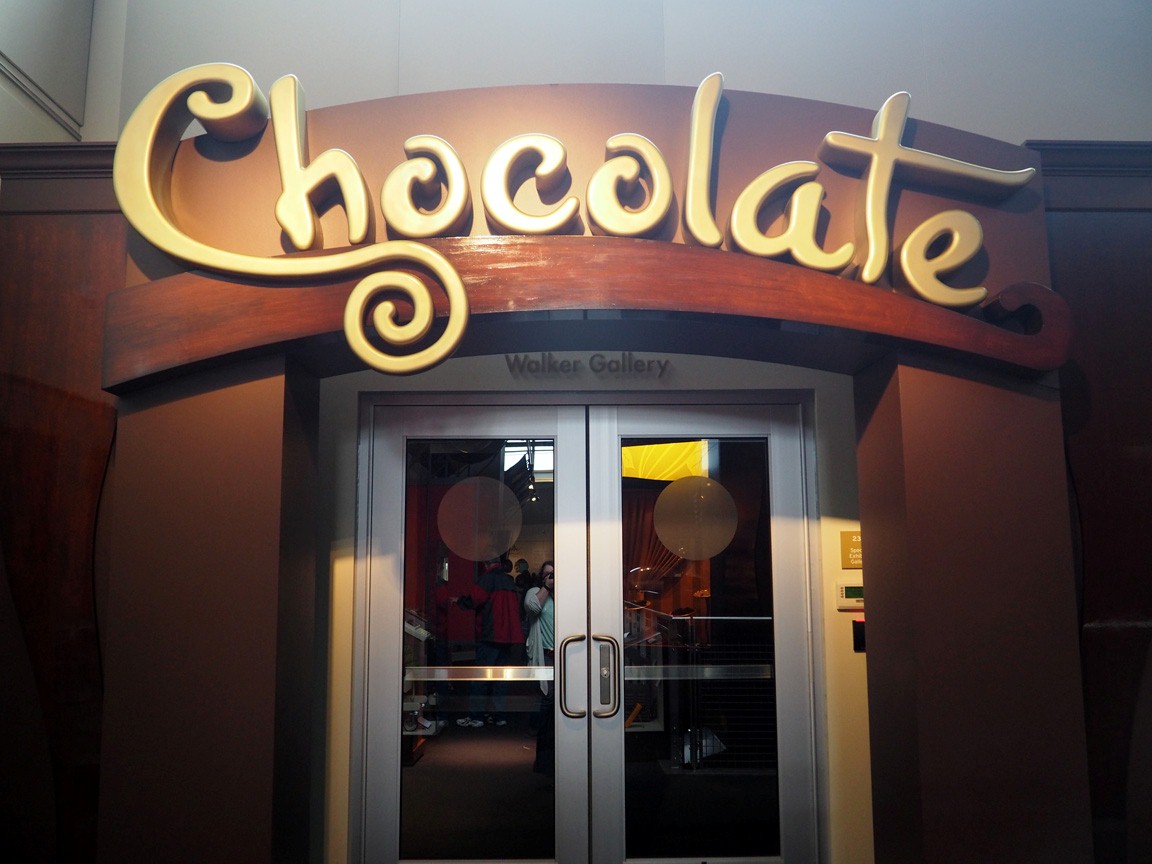 I’ve already talked about the general awesomeness of the Seattle Museum of History and Industry. They also offer the occasional amazing special exhibit. Chocolate: The Exhibition is a national tour, developed by the Field Museum of Chicago, and it’s actually been on the road since 2002; currently it is located at the Cincinnati Museum Center.

The scent of artificial chocolate is pumped through the vents as you enter Chocolate: The Exhibition, engaging the senses and preparing visitors for the smorgasbord of information to come. You’re started at a life size replica of a cacao tree, which not only shows how the pods grow (off of the trunk, not off of the branches like apples or peaches), but also talks about the ecosystem that the trees are part of and the life they help sustain, like the pink-legged graveteiro bird, which was first discovered in 1996 and primarily lives around cacao trees, or the endangered golden-headed lion tamarin, which makes its home in the canopy over cacao trees. It helps to show that our choices don’t exist in a vacuum: if there’s a high demand for cheap beef, more acres of rainforest are destroyed to make room for less-delicate, more profitable cattle. It’s why buying shade-grown cacao is important, as it helps keep the cacao part of the ecosystem instead of ripping down trees and growing it separately. Cacao pods contain around 50 seeds, which is enough to make about 7 chocolate bars. But before it was ever made into bars (long before!) it was whipped into a frothy, spicy drink by the ancient Maya of Central America, a treat treasured by kings and priests, though the poor occasionally imbibed it as well. It was considered the food of the gods and was thus a treasured luxury item; as such, priests would present the seeds as offerings to the gods. The Maya also traded cacao to peoples who lived in cooler, drier areas who couldn’t grow the trees themselves–there’s evidence in a mural in central Mexico that the people there knew of the trees though their climate could not possibly support them. By the 1400s, cacao use had spread through Mesoamerica via the trade empire of the Aztecs, who would not only drink the cacao (or chocolatl), but also used it as a form of currency, with farmers paying their taxes in cacao seeds. In 1519, Hernan Cortes led Spanish soldiers to the Aztec capitol to divest them of their gold. Instead, they found cacao–lots of it. This opened the cacao market to Europeans, which is a polite way of saying that the Spaniards conquered the Aztecs through genocide, stole their cacao (and everything else), and sold it in Spain. Once it had been introduced to Europe, someone there added sugar to the beverage, and it quickly became renowned as a drink of the wealthy. However, it took nearly 100 years for knowledge of the drink to spread outside of Spain, for reasons that remain unknown. For some time, it was the beverage of choice, served only in private clubs to the rich, primarily to men. The first chocolate house opened in London in 1657, and within 50 years, there were more than 2,000 chocolate houses in London alone! When it was served in the home, it was in expensive, decorative cups and saucers, echoing the vessels of the Mayans and Aztecs. The cups themselves were symbols of wealth and status, and these wealthy people would often linger in bed over a cup of chocolate in the morning  instead of coffee, which was considered the bitter drink of the working class (and is now sold to them for $5 a pop by mega coffee chains, so it’s not like coffee has suffered by that comparison). I appreciated that the exhibit didn’t gloss over the human toll of chocolate’s growing popularity, spread over almost the entirety of 300 years, both in Central America where the beans were grown via forced labor by the native peoples, and in North America, where slave labor was used to meet the increased demand for sugar, and later, to replace Native labor in southern Mexico and Central America when the population was drastically reduced by disease. In fact, sugar is directly responsible for the rapid growth of the slave trade in the Americas. The exhibit noted that at the beginning of the 19th century, the price of one teaspoon of sugar was approximately equal to the monetary value of one day in a slave’s life, and it’s deeply disturbing to consider that human life was valued so poorly compared to an amount of product that is now given away for free in packets in diners. It wasn’t until the industrial revolution that things began to change, though even now, farmers work very hard growing cacao to sell to the world and many are so poor that they have never even tried chocolate in its finished form. Disgustingly, child labor and trafficking still flourishes in the cocoa trade, which, again, is why your purchase decisions matter, and why I’m glad that the museum didn’t skip over some of the less palatable aspects of the chocolate trade. During the industrial revolution, mass production made chocolate more widely available and affordable to those other than the wealthy. In 1847, after patenting a method of grinding cocoa beans with a steam engine, Joseph Storrs Fry sold the first chocolate bar in England. Soon after, nearly every candy shop began to sell chocolates that had been molded in decorative molds. By the 20th century, mass-produced chocolates took over, and the world hasn’t looked back. In 1875, Daniel Peter and Henri Nestle claimed they invented milk chocolate by adding condensed milk to their recipe; however, it must be noted that a company in Germany had already invented milk chocolate in 1839. Not only does this make the bars smoother and creamier, but it also made it possible to reduce the amount of cacao per bar, which made it overall cheaper to produce. In fact, today, the United States only requires a bar to contain a minimum of 10% of chocolate liquor to be considered milk chocolate; the standards in the EU are minimum 25% cocoa solids. In 2007, the chocolate manufacturer’s association (which includes Nestle, Hershey’s, and Archer Daniels Midland) began lobbying the FDA to change the legal definition of chocolate to allow the substitution of “safe and suitable vegetable fats and oils” including partially hydrogenated vegetable oils for cocoa butter in addition to using “any sweetening agent” (including artificial sweeteners) and milk substitutes. Currently, the FDA does not allow any product to be called “chocolate” if the product contains any of these ingredients. When you see something called “chocolate-y” or “made with chocolate”, that’s a product that contains one of the aforementioned ingredients…but I’m getting ahead of myself. Be…sure…to…drink…your…Ovaltine. Ovaltine? A crummy commercial? Son of a bitch!

In the early 1800s, powdered drinking chocolate also began to be sold to the masses as cocoa: the cocoa butter had been extracted, and the chocolate had been treated with alkaline salts to help it mix with water. Cocoa had an overall milder taste than the drinking chocolate sold in chocolate houses, and it was easier to dissolve in liquid, which made it ideal for the home consumer. After World War I, the popularity of candy bars skyrocketed. During both world wars, chocolate became scarce and was rationed to soldiers. During World War II, almost all of the chocolate produced in the United States was earmarked for the military, as well as a good portion of the cranberries. It wasn’t until chocolate became much cheaper to make and buy that advertisers began to market to children. It’s taken off so well that recently Congress has tried to regulate how these foods are advertised to children in the hopes of combating childhood obesity. “You smell good enough to grind up into a paste, add chiles, and whip into a frothy beverage. Mmmm. Shall we go into the other room?”

The exhibit also discussed the myths about chocolate’s amorous effects. Although chocolate does contain phenylethylamine (the same substance created by the brain when a person experiences love), there’s no evidence that chocolate stimulates the libido. But chocolate has been entwined with romance since at least the 16th century, with Mesoamericans exchanging chocolate drinks at their wedding, and it’s a known fact that the lack of chocolate on Valentine’s Day has an anti-libidinous effect. Today, chocolate is a global industry centered around a narrow belt of areas within ten degrees (north and south) of the equator: primarily the Ivory Coast, Indonesia, Ghana, Nigeria, Brazil, Cameroon, Ecuador, Dominican Republic, Papua New Guinea, Malaysia, Columbia, and Mexico. Cacao is hard work. Pods must be harvested by hand, trees take 3-5 years to begin to produce pods, and mold can wipe out entire crops. It is a guarantee that any piece of chocolate you have ever eaten contained cocoa that was hand-picked by a farmer in one of the above countries. Like other agricultural products, cacao experiences highs and lows in the world market. A rise in demand or a decrease in production drives prices up. But when cacao prices fall, it can devastate entire countries.

What you buy and where it comes from makes a difference: no one wants to think that a human rights violation was involved in creating the delicious snack they’re enjoying. You can help by buying chocolate that’s certified fair trade and shade-grown–not only do these niche manufacturers generally pay a higher price for their beans to ensure higher quality which means a higher standard of life for the people growing it and the animals living nearby, but you’ll also be eating better chocolate made by people who don’t want to stuff it full of palm oils and other cheap additives. It’s win-win! Chocolate: The Exhibition opened my eyes to the wider world of chocolate, and it’s a great reminder to savor it rather than take it for granted.

Nom or Vom: Death By Chocolate…And Poison, I’ll Stick In Some Poison