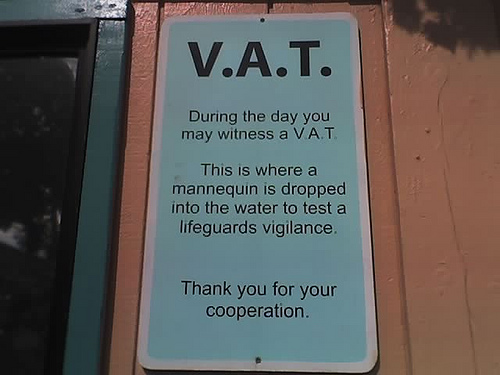 Time for a song!

Yesterday, Jim, Anne, Shannon and I went to Wild Waves to soak up some fun, some sun (too much sun), and push from our minds whatever nastiness might be floating about in the watery depths. Last year, Anne had mentioned to her friend Denise that we were planning a water park outing, and she pulled a horrible face and said SHE would NEVER use a public pool as “the water tastes digusting, because of all those creams and lotions that fat people put on their skin.”

…I think Denise is a rotten bitch.

Last year, the day we picked for Waterpark Hooky ended up overcast and raining on and off, which was perfect in terms of being able to run up the stairs and slide down over and over again without having to wait for a tube, but by the end of the day, we were all really, really cold.

This year, it was sunny and bright without being excessively hot and it made the whole day much more comfortable with the exception of the very end when I realized I had turned into a crispy-skinned Peking duck.

We got on all of the tube rides at least once, we hit most of the non-tube slides as well, and on one of the high-speed slides, I rocketed down so fast and so far, I was afraid I would shoot right off the end. Apparently, standing next to the slide when I shot down it was a bit like visiting Shamu at Sea-World: if you are in the first 15 rows, you’re going to get soaked.

We spent a good amount of time in the wave pool, which is more fun than a regular pool by about one million points, and it’s even more fun, if, say, after half your party has departed, the remaining two people ogle hot swimsuited men shamelessly like contestants for the Guinness Book of Lechers from the deep end.

Like last year, we spent most of our time on the waterpark side of things, eschewing spinny rides that might make Jim vomit in favor of bumper cars, where I bore witness to one of the creepiest, most-wrong feeling, shudder-inducing moments I’ve ever had the displeasure of standing next to in line. Picture this: A shirtless, swim-trunk wearing man (perhaps the father, perhaps an uncle, perhaps the world’s creepiest stranger) who appeared to be in his late 20s or early 30s, holding a girl of about 9, with her legs wrapped around his waist, MOANING BACK AND FORTH “oh girl!” “oh boy!” “OH GIRL” “OH BOY”. At one point, this young girl began kissing this older man’s stomach. Nothing about this situation seems right to me. Nothing.

After the bumper cars, we thought we’d ride the wooden roller coaster. The female operator clearly hadn’t spent enough time on the waterpark side of things as she had so much sand crammed up her vagina that it resembled the Gobi desert, barking and huffing at people to “JUST PUSH DOWN AND PULL UP ON YOUR LAP BAR” and “GOD, I’M COMING”. THEN, it was revealed that someone had managed to break free of his lap bar on the last ride and was standing, and that a bolt had fallen off the ride somewhere but we were ‘free to hang around in case they found out where it came from’. No. No, thank you. OH HELL NO. When is the bolt vigilance test?

18 Comments → Challenge the raging water of DEATH. Dare to discover what water is really made of! H2WHOA!